Transit-Oriented Development as a Road to Sustainable Growth

Transit-Oriented Development as a Road to Sustainable Growth

Are flying cars more feasible than the widespread adoption of transit-oriented development (TOD) in America? Well, for some residents of cities such as Los Angeles, this technological "fix" to congestion can appear more tangible than rethinking the city. But congestion is not the real problem here; it is a symptom of something larger awry, namely the low levels of accessibility and livability in many of our larger cities.

Instead of just bullet-point naming the problems and potential fixes for our cities, let me just tell you about one unlikely argument: The case for transit-oriented developments is stronger in a downturn than during a bull market. Recent research suggests that TOD provides more of a buffer against an economic downturn and can be more of a boon for the next boom. But who's going to believe that?

The mayor of Charlotte, N.C., for one. He sees transit as an investment for the future. Others are similarly starting to realize that TOD promotes economic development, enhances real estate value, and increases favorable labor access, both for laborers and employers; all of which are key tools for survival in an economically equalized playing field.

If You Build It They Will Ride

A planned expansion for Los Angeles's Orange Line bus rapid transit (BRT) is expected to create 210,000 new jobs and $32 billion in economic output over the next 30 years. Cumulatively, public transit on a national level provides $60 billion in public benefits and only costs $31 billion in public investment. In other words, $1 invested in transit gets you $2 in savings, not a bad deal.

As for jobs, investments in transit produce 19 percent more jobs than an equivalent investment in new road and bridge projects. Those are just the direct benefits. Indirectly, public transit saves enough gasoline to fuel 5.8 million cars a year, averting $9 billion in spending on gasoline (2006). And, if you include land value, parking is estimated to cost $500 billion a year; not to mention the accidents and delays that cost Americans $365 billion a year, or a $1 billion a day.

This number-jumble suggests that with rising urbanization rates and lower per capita urban vs. rural energy consumption, there are huge efficiencies to be gained on economic, health, sociological, and environmental levels. Some believe public transit is just the means to an end of livable communities, but public transit can actually be used as a redevelopment tool, becoming both the means and end in itself.

Per definition, TOD includes mixed-use districts, pedestrian- and bike-access, and public transit among others features. Conceptually, the term entails a much-needed marriage between land-use and transportation planning. I say "much-needed" because -- scarcely known -- sprawling development generates less in tax revenue than the costs it incurs. Similarly, it is cheaper to provide public infrastructure and services to smart growth. However, for various cultural and economic reasons, the public perception of public transit is as a subsidy whereas spending on automobile infrastructure is viewed an investment.

The chart below demonstrates the uphill battle that public transit and TOD must fight. The idea is simply this: Perpetual increases in sales taxes are not a sustainable way to fund public transportation and if public transit is not tied in with land-use planning then it will be for naught. Ultimately, we have the choice to pull ourselves out of this hole by investing in energy-efficient, job-creating, and vibrant transit-oriented developments. The only question is: What exactly is needed for TOD to get off the ground before flying cars? You tell me. 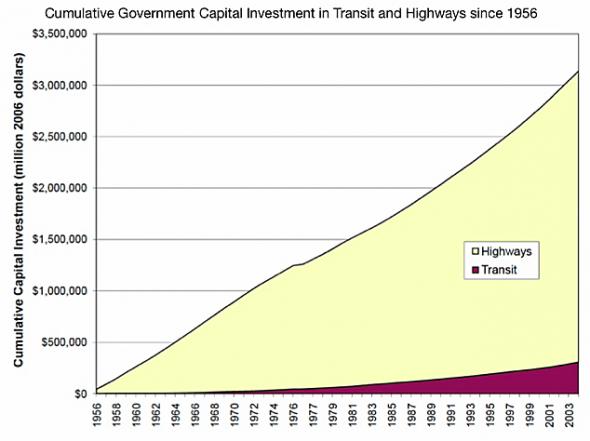 Tali Trigg was a Stanback Fellow at Rocky Mountain Institute, where he worked on engineering education as well as transit-oriented development this summer. Tali is pursuing a Masters of Environmental Management at the Nicholas School of the Environment at Duke University and is focusing on energy and transportation studies.

Here's the 101: How to create transit-oriented communities in Los Angeles