How to Engage Stakeholders on Sustainability

How to Engage Stakeholders on Sustainability

Stakeholder engagement is a critical, yet often overlooked or under-prioritized aspect of many organizations’ sustainability efforts. The Sustainability Stakeholder Engagement (SSE) conference offered insights and practical ways to build effective relations with stakeholders, from customers, employees and investors, to suppliers, NGOs and communities. SSE gave considerable attention to social media, a topic near to our hearts (Beth is putting the final touches on a white paper on this subject to release next week). The panel on engaging consumers offered perhaps the most lively conversation with the audience.

Here are takeaways from the sessions we attended:

• Engage stakeholders sooner, rather than later to develop a more material and effective strategy. Understanding their perspectives and issues can help shape a better approach for your organization from early on in the process.

• Sustainability has become important to companies of all sizes, according to Tim Smith, SVP at Walden Asset Management, who surveyed small caps in his portfolio. They told him they understand its importance, but aren’t quite sure how to engage in it.

• Internal education often takes more time than external engagement. Companies must continually identify and prioritize key internal stakeholders. Shoot for some “clear wins,” asking “How do I get my co on board?”

• Engage even your most vocal critics to try to find common ground. They impact consumer and media perceptions and ultimately sales -- positively or negatively.

Even as the social media presentations were being made, a handful of attendees were Twittering live about them and the event from their laptops and handhelds -- something commonplace at trade events these days. Other salient points include: 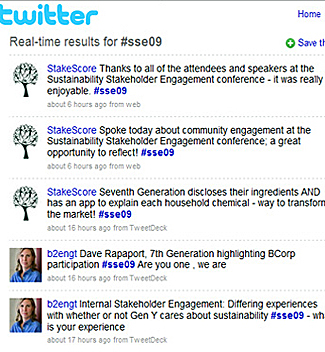 • Social media is an increasingly important way to engage with stakeholders in a more timely manner. Representatives from EDF, SAP, Sprint, 2 Degrees and Max Gladwell spoke on the emergence of this technology.

• "If you're not on Twitter, you're not able to tell your side of the story," was a quote from Hahn which attendees tweeted, and which spread the most of all conference tweets elsewhere on Twitter on Monday.

• Ensure there's an adequate internal team to help keep content fresh and respond to others. “You can't just drop the conversation once you begin,” said Martin Chilcott of 2degrees.

• Be open and authentic in use of social media -- ensure a “Spin Free Zone” -- and stakeholders will trust you more and be more forgiving of mistakes.

• Be OK with the occasional conflicts of message.

• Use social media to talk about your sustainability efforts “like you’re on a journey,” advised Chilcott, indicating a level of transparency others find more engaging.

• Panelists agreed that consumers are confused about sustainability messages and that data standards are needed. Research found most consumers even believed they weren’t impacting the environment by buying green products, according to Chet Chaffee, vice president at Scientific Certification Systems (SCS). This showed attendees that there is much work to be done in terms of guiding organizations and educating consumers.

• Many are also skeptical of green claims due to greenwashing.

• There was much discussion about Walmart’s Sustainability Index, Dianne Feinstein’s proposed federal eco label legislation, and what some states are doing to try to provide some clarity to the messaging. Panelists believed an index like Walmart’s could be a game changer to solve the problem of consumer confusion.

• To build credibility and differentiate yourself among the green noise, put messaging in context, connecting the brand with mitigating the type of impact relevant to its product (e.g., creating a more fuel-efficient car); also by obtaining outside audits and relevant, respected certifications.For example, EPA’s SmartWay label helped Sharp gain traction with Walmart, which boosted it to preferred vendor status, and helped its sales.

• Employee engagement is critical to success, and employees need to be empowered. Just asking them to participate isn't enough, make it easy for them to do so. There were various tactics presented from companies like Sharp and Deloitte. Discussion of incentives included giving a vacation day for a day of service, friendly competition across offices to see who can be the most green, and contests on sites like Justmeans.

• Face-to-face feedback is necessary, as email is not as effective to communicate with and recognize employee efforts.

• Focus on developing relationships with the “adverse” stakeholders, as well as those that support your work. It’s much better to enter into dialogue with those opposed to you, even if you disagree. Don’t try to ignore or undermine their credibility.

• Seventh Generation was cited as an example of a firm whose accumulated goodwill helped it resolve an issue with multiple NGOs before the issue even went public.

• Many NGOs engage with large multinationals; those relationships shouldn't constrain NGOs from dealing with such firms on local or regional issues as well as broad industry issues.

Corporate sector participants at SSE included representatives from Benjamin Moore, PepsiCo, SAP and Sprint, in addition to Deloitte, Nestle Waters N.A. and Sharp as noted above. Among NGOs, those attending included representatives from Environmental Defense Fund, Greenpeace and World Wildlife Fund. The audience size was modest, fewer than 100 people, but most seemed to appreciate the intimacy that the small group allowed.

More information about the conference can be found on Twitter by doing a search on #sse09.

Images: Beth Bengston tweeting and a screenshot of some of her tweets. Photos by Perry Goldschein.

'Sustainable Products' to Get a Boost from the EPA

New Report is a Primer on Top Sustainability Strategies