Today, Newsweek magazine unveils its first annual Green Rankings, the fruits of a near-Herculean endeavor: rating and ranking the environmental performance, achievements, and reputation of the S&P 500. The list, published today in a 12-page special section in the magazine as well as online, is the culmination of an 18-month journey.

The resulting rankings are straightforward, almost elegant, but it wasn't a straight or easy path. Like most such rankings, they're imperfect. They'll likely be challenged and debated, especially by some of the lower-ranking companies, not to mention the activist/blogosphere community. But it may well be the best effort yet to rigorously and comprehensively assess the mainstream corporate marketplace — at least in the U.S.

Over the past week, I've spoken with the creators of the rankings to understand the story behind this effort: their methodology as well as the challenges they faced, and how they faced them. As the creator of the annual State of Green Business report, I know these challenges well: creating a defensible, easy-to-understand set of metrics on business and the environment in a world in which data can be sketchy, inconsistent, or simply nonexistent. 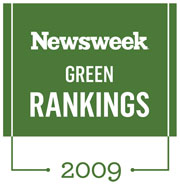 First, the basics. The Newsweek rankings assess the S&P 500 -- the 500 largest publicly held companies that trade on either the New York Stock Exchange or NASDAQ, the two largest American stock markets -- on three metrics:

• an "environmental impact score," based on more than 700 metrics, compiled by Trucost, a leading provider of data and analysis on company emissions and natural resource use;
• a "green policies score," an analysis of corporate policies and initiatives by KLD Research & Analytics, one of the pioneers in socially responsible investing research; and
• a "reputation survey score" resulting from a survey of CEOs, corporate environmental officers, and academics conducted by CorporateRegister.com, an online directory of company-issued CSR, sustainability, and environment reports from around the world.

The overall winner: Hewlett Packard, which edged out its rival Dell for the number-one spot. Rounding out the top 10 after Dell were Johnson & Johnson, Intel, IBM, State Street, Nike, Bristol-Myers Squibb, Applied Materials, and Starbucks.

It's interesting to peruse high-profile companies. Examples: McDonald's ranked 22, Microsoft 31, Walmart 59, Clorox 77, Google 79, General Electric 82, Kimberly Clark 120, Apple 133, Halliburton 169, Tyson Foods 479, Monsanto 485, Duke Energy 490. I encourage you to dive into the full rankings and do your own comparisons and analysis. (The online version has some great detailed data.)

It may not be surprising that half of the top-10 rated companies (as well as half of the top 20) are technology firms, and that 8 of the 10 lowest-rated are energy utility or coal-mining companies. That makes sense: Most tech companies don't actually manufacture anything themselves these days -- they mostly purchase components from other manufacturers -- while utilities and mining companies are known to make quite a mess, in terms of emissions and other impacts.

Therein lies one of the big questions of such an effort: What do the rankings really mean?

"We regard this as a best first effort," Peter Bernstein told me last week. Bernstein and his partner, Annalyn Swan, operate ASAP Media, a "publishing and content development firm," and collaborated with Newsweek to produce the rankings. Both Bernstein and Swan have served as senior editors at Newsweek, U.S. News, and Fortune, among other places.

The ASAP-Newsweek team, along with a small advisory panel -- including Yale's Dan Esty; John Steelman of NRDC; Marjorie Kelly of Tellus Institute; Climate Counts executive director Wood Turner; and David Vidal of the Conference Board -- wrestled with issues like the one described above, ultimately creating a system that tried to account for the different industries' footprints. As Swan explained: "The advisory panel asked all the relevant questions you would ask: How do you calibrate and fine-tune the weightings between the actual environmental footprint of companies and positive reputations and initiatives and policies. That took several months of discussions. We convened the panel on numerous occasions. This was not a light undertaking."

Added Bernstein: "If you rank companies solely on their environmental footprint or impact, certain industries would dominate that list -- technology, health care, banking -- they all don't have as great as environmental impact as other industries. So, we had to adjust that with intentions and an industry bias. That was the subject of discussions concerning the weighting between these various data points, something all of our data partners debated. It was the single most time-consuming subject that we went back and forth on with the advisory panel."

The fate of corporate rankings rest on any number of such institutionalized biases, but that's par for the course. If you peel back the methodology of any massive undertaking like this -- Fortune magazine's annual ranking of the World's Most Admired Companies, is one of many such examples -- you'll find minuscule differences between companies that, depending on how things are scored and weighted, can rocket any given firm up or down the rankings.

And then there's the quality of data, about which I know more than a little, having attempted various analyses over the years using other organizations' research. As Bernstein put it: "This is a field in which, across the board, a lot of the data isn't as good as one would hope, or isn't as fully exposed, or doesn't exist. In each of these areas, greenhouse gas emissions being the most obvious, not everyone has data. Concerning the [U.S. government's] Toxic Release Inventory, some companies have to disclose by law and some don't. All of these factors were a balance. We hope that both disclosure and measurement will get better over time. This is a first stake in the ground."

I (and many of you) could pick apart the Newsweek rankings — for example, they don't include some of the more admirable privately held companies, such as Patagonia; Interface, the iconic green carpet company, isn't included in the S&P 500, even though it's listed on NASDAQ (not sure why). But I'll leave the picayune stuff to others. I'd rather step back and admire this first effort, however imperfect, and salute the team for doing what hadn't previously been done, or done well: brought together a wealth of data on a broad spectrum of the world's biggest companies to provide a snapshot of the green business world.

There's also the bigger picture beyond the numbers. As Bernstein told me: "You can't help but be struck by the enormous range of efforts and programs across the board that so many of these companies are engaged in their environmental efforts. Whether they're the most effective programs that will have their intended effects, or whether they're just good public relations, remains to be seen. But to the extent to which these large companies are engaging in efforts to look at their own emissions and their own environmental footprint -- and coming up with imaginative, creative programs that are addressing climate concerns, water usage concerns, supplier concerns -- it's rather staggering."

I suspect that as you read this, scores of senior sustainability professionals are getting calls from their overlords in the C-suite, asking tough questions about why their companies fared more poorly than hoped, and demanding answers.

And for that reason alone Newsweek's rankings are a beautiful thing.

Can Sustainable Investing Beat the Markets?

Who's Invested in Newsweek's Least-Green Companies? (Maybe You)

Newsweek's Green Rankings: What They Mean ... and Don't