Last week I served on an education panel at the second annual Biomimicry Conference in San Diego. The purpose of the event, which was organized by the Biomimicry Institute and the San Diego Zoo, was to bring together leaders from all sectors of the community to discuss how San Diego can become a biomimcry innovation hub.

It's an ambitious goal, but San Diego has a lot going for it, starting literally from the ground up. Designated as a part of a biodiversity hotspot by Conservation International, the county has a wide diversity of habitats because of its vertical relief and mild climate. In fact, it has more distinct habitats, from montane to desert to coastal, than any other county in North America. Add the world-famous San Diego Zoo, an established high-tech industry, and academic institutions like the Scripps Institution of Oceanography at the University of California San Diego, and you have a pretty good start.

Conferees heard speakers Janine Benyus, Jay Harman and Chip Heath, as well as panels on education and business. Janine is the founder of the Biomimicry Institute and author of “Biomimicry: Innovation Inspired by Nature.” Jay is the CEO of Pax Scientific, a pioneer nature-based technology company. Chip is the author of “Made to Stick: Why Some Ideas Survive and Others Die” and a professor of organizational behavior at the Stanford Graduate School of Business. The organizers treated everyone to tours of the zoo, and even brought a live cheetah into the auditorium for one of the breaks. This was one time when people were not advised to stand up and stretch!

The event was a good chance to learn more about several very important products that represent the changing character of manufactured goods and the companies that create them. These products all have several things in common: They are all bio-inspired, they all change the norm of their respective industries and they all appear to reduce a range of costs, including that most popular of externalities, environmental costs.

The Mirasol display technology (above) from Qualcomm MEMS Technologies is based on the structural color phenomenon found in butterfly wings and is intended for use in cell phones and other small electronic devices. Ever wonder how certain animals flash those iridescent colors? Peacocks, butterflies, mollusks, and beetles grow nano-scaled surfaces that break up white light and bounce it back up in its component colors. On the bounce back up, however, certain wavelengths of light interfere with each other, canceling out some perceived colors and allowing others to show.

Qualcomm looked at this occurrence and devised a way to mimic this so-called interferometric process. Using a MEMS (micro-electro-mechanical system), engineers have designed a reflective device that opens or closes tiny gaps between a mirror and a glass plate in a tiny pixel. This allows a predetermined wavelength of light to emerge or be suppressed. A display will contain thousands of these pixels adjusted to reflect red, green or blue. How these are programmed will determine the ultimate picture. The device also does a little surfing for free: when current is run through the pixel's “mirror” (a reflective and conductive membrane), electrostatic attraction causes it to stick against the bottom of the glass plate, closing the gap and turning the color off. A lower current returns the pixel to its open, “color on” position.

This device is a great example of using structure to save energy: it is reflective and doesn't need to be backlit or have powered lights in most situations. Qualcomm is also claiming that the device is easier to read, faster to be displayed, and will reduce size and weight in the race to the small in the display market. A large and crowded market it is, too, representing approximately $100 billion dollars with seven different competing technologies. The company is confident that this will be a transformative technology and even change what people will expect from devices in the near future.

Another invertebrate, the tardigrade, was the inspiration for a different product in a very different market. The tardigrade, or water bear, is one of the champion extremophiles on our planet, defying what we consider death with the ability to return from a deep sleep after at least 125 years. How do we know this? Some of these barely visible creatures were found on mummies that had been brought to a completely sealed case in the British Museum on a recorded date and resurrected over a century later, according to Dr. Rolf Muller, president and chief scientific officer of Biomatrica. The tardigrade achieves this Lazarus-like feat by anhydrobiosis (“life without water”), a chemical process that coats the very molecules of the organism with a stable film that preserves the living tissue until it can be revived with water.

Biomatrica has developed a method for preserving laboratory samples by using this molecular “shrink-wrap” principle, calling it SampleMatrix technology. Its main market is university research facilities where thousands of freezers may be cheerfully eating up energy in order to keep DNA, RNA and bacteria samples from spoiling. Instead, the company offers a system that allows researchers to keep samples at their lab benches at room temperature. It claims that such a switch at a 1,000-freezer research institution could offset 496 metric tons of carbon emissions per year. Beyond the basic energy and pollution savings, the implications for medical and research capability-building in the third world are enormous. 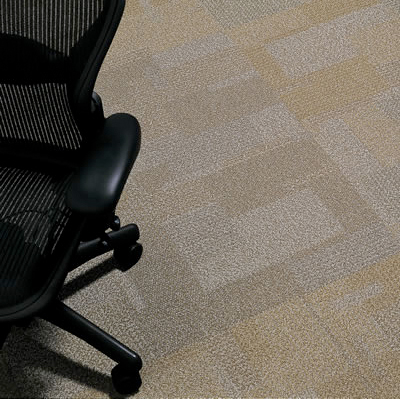 InterfaceFLOR was also represented by its director of strategic sustainability, Lindsay James. It has been a sustainability leader for many years, exhibiting this in both its products and its business organization. Its CEO, Ray Anderson, was one of biomimicry's early champions and is now a well-known environmental speaker at events like the recent West Coast Green conference in San Francisco. Their initial idea was fairly simple but has had wide implications. Instead of making commercial carpet rolls, they made tiles that could be replaced individually. In 2000, they employed a biomimicry concept to create Entropy carpet tiles (right) in non-directional patterns that would mask any replacements. The subsequent reduction in waste was enormous. Since that time they have fully embraced the idea of waste as resource in pursuit of the goal of zero impact by 2020, retooling their operation so that other carpet companies' waste now provides feedstock for their products. It's a neat trick if you can get your competitors to work for you!

Jay Harman's company, Pax Scientific, makes things that move fluids: fans, impellers, turbines, ducts, heat exchangers and mixers. Jay describes himself as a serial inventor and has designed award-winning watercraft as well. He has always been fascinated with the phenomenon of ring vortices and spirals and has studied these forms as efficient models for his products. It took him 20 years to figure out how to freeze a water vortex so that he could reverse engineer its shape. Since then, with the aid of Computational Fluid Dynamics modeling software and CAD-driven prototyping, his company has developed dozens of products.

The Lily Impeller is a small 6-by-4-inch spiral device that can operate on a few watts of energy and mix as much as 4 million gallons of water. Designed in 1997, its beautiful shape has earned it a place in the permanent collection of the Museum of Modern Art in New York. The company claims that this device reduces the energy required by 15-30 percent and noise by 75 percent over conventional planar rotors. It does this by its shape; compound or logarithmic curves along multiple axes mimic and induce a vortex in the fluid and maintain the recirculation associated with it. With almost a third of the world's energy associated with machines that move either air or fluids, the cumulative effect of switching to more efficient mixers would be very great indeed.

How the business of biomimicry is happening at the zoo