China is putting forward aggressive policies to reduce energy intensity while still maintaining rapid development. But transformative sustainable development in China needs to respect some unique conditions if it is to be successful.

More than 30 years ago, Amory Lovins, the co-founder, chairman and chief scientist of Rocky Mountain Institute, proposed a "soft energy" path for America's own growth trajectory. This alternative vision was based on recognition of the profoundly wasteful use of energy at the time, the many profitable opportunities to increase efficiency throughout the system, and the potential of a rapid deployment of "soft" renewable energy supply technologies.

Due to inconsistent federal policy, the trajectory the U.S. followed over the ensuing decades was erratic, and in some ways we ended up on the "hard path" of increasing fossil fuel-based supplies.

Today, the possibility of China succeeding on a true soft energy path is tantalizing. And while China has strong political and cultural incentives for energy intensive development, there are many barriers to the rapid transformation in energy efficiency and renewable supply required by this model. Recognizing these underlying biases and working to educate local authorities is one potential way to encourage a radically different trajectory for development in China.

The evolving picture of China's energy use is full of contrasts. From one view China is making rapid headway reducing its energy intensity. The Central government has targets for reducing energy use by 20 percent by the close of 2010, and there are huge subsidies for renewable supply technologies. Yet the sheer scale of the development path ahead of China points to dramatic increases in fossil-fuel consumption-and resulting CO2 emissions-while current efficiency measures take some time to come into effect.

Even under the most efficient scenario for energy development, detailed in a report by a major think-tank under the Chinese National Development and Reform Commission, China's total greenhouse gas emissions will double by 2050. With most global warming models indicating that the world must stop the runaway CO2 emissions train much sooner, the challenge of continuing China's development on any sustainable path seems daunting.

In comparison to America of the 1970s, China's situation on energy efficiency is far more urgent -- and yet the scale of its development needs is drastically greater. Because of rapidly increasing energy consumption for a growing middle class and through its role as factory to the world, China cannot afford (both economically and environmentally) to develop much further along the "hard path." Indeed, the world cannot afford it either. 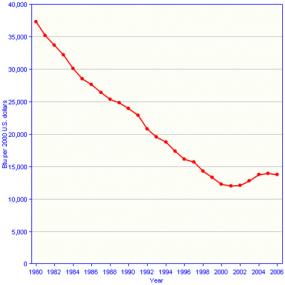 The good news is that China has a much greater potential for success on a soft path because its energy policy remains aggressive and consistent for increasing efficiency throughout the economy, and it leads the world in producing renewable supply technologies like PV solar.


If China were really to follow a soft energy path, there are a few unique political, economic and social circumstances that need to be acknowledged -- and appropriate solutions applied:

The right approaches for communicating the value of energy efficiency need to be taken; otherwise local officials will continue to put showy solar panels on their buildings rather than higher impact retrofits like replacing windows, improving insulation and upgrading HVAC systems. Even with a strong central policy and official mandates, the potential for transformational change at this crucial stage in China's development is lost without greater understanding of the potential for efficiency.

If there is any possibility of a true soft energy path for sustainable development taking hold in China, the country could confidently navigate where America has stumbled since the 1970's. In order to meet greenhouse gas reduction goals in the current, urgent timeframe, the world needs China to prove that sustained rates of development are possible under completely different conditions than were exemplified in the West. China's strength remains the policy powers of its central authority -- but we must respect China's unique cultural and political conditions to ensure those directives are implemented in a meaningful way on a local level.

Aris Yi is a research fellow and Amory Lovins' China representative at Rocky Mountain Institute. Jonah Taylor is a freelance writer who works frequently with RMI's media and communications team.

A decade in review: the most underrated clean energy stories