A global average temperature increase of 2 degrees Celsius is now seen by the majority of climate scientists as a 'tipping point' beyond which there is a real risk of long-term irreversible climate change. The UNDP considers 2 degrees Celcius the potential threshold at which large scale human development could be reversed. They argue that climate shocks such as droughts, floods and storms that are already among the most powerful drivers of poverty and inequality will become more frequent and intense with climate change..

In order to have a better than 50 percent chance of avoiding this tipping point, it is estimated that carbon dioxide concentrations in the atmosphere must be held below 450 parts per million (ppm). According to the Potsdam Institute, if one counts all six major greenhouse gases, rather than just carbon dioxide, we have actually already surpassed 400 ppm (PDF). Another 10 years of business-as-usual would add another 50 ppm on top of that. The task ahead of us involves not only a reversal in the current emissions growth rates but also a reduction in absolute emissions to bring us back to climate stabilizing concentrations of greenhouse gases.

Acknowledging that emissions are strongly correlated with economic growth, and that industrialized countries represent the vast majority of emissions per capita and have had the luxury of emitting heavily ever since the dawn of the Industrial Revolution, climate scientists and policy experts recommend that industrialized and developing countries respectively achieve 85 percent and 50 percent absolute GHG reductions by 2050. {related_content}
The Wrong Ballpark

Historically, no policies related to climate change have even entered this ballpark. In fact, the Kyoto Protocol, assuming all commitments were fulfilled and it were extended to the year 2025, would represent less than one-thirtieth the reductions necessary to achieve the recommended levels.

Just over the past year and a half, though, international policy dialogues have produced a drumbeat of calls for reductions of this magnitude:

• January 23, 2008: The European Union committed to reducing its overall emissions to at least 20 percent below 1990 levels by 2020, and offered to scale up this reduction to as much as 30 percent if other industrialized countries made similar commitments.

• June 26, 2009: The U.S. House of Representatives passed the first federal climate bill, which includes a package of provisions that in the aggregate amount to an 83 percent reduction below 2005 levels by 2050.

•  November 30, 2009: China's President Hu Jintao pledged that his country would reduce their carbon intensity (carbon generated per dollar of GDP) by 40-45 percent by 2020.

With the scientific and policy trends pointing to increasing and unprecedented levels of consensus on the scale of global emissions reductions, corporate GHG reduction strategies remain non-transparent, non-standard and non-verifiable.  A bit like the Wild West, the domain lacks law, scrutiny and is full of somewhat aimless shooting.

While most industry sector leaders have GHG targets of some kind (see Carbon Disclosure Project), even amongst the leaders charting the frontier, their targets are:

•    Grounded in little more than 'guesstimates' of what looks good for marketing purposes or what seems reasonably easy to achieve in terms of sustainability investments. Few, with the exception of BT's, are driven by the climate science.
•    Very short-term in nature despite the long-term nature of the climate challenge. According to a recent study of the Global100 (PDF), 84 percent fall into this category. ENEL, France Telecom, Tesco and Vodafone are among only a handful that have targets out to 2020.
•    Often intensity targets normalized by:
•   Sales or revenue, which do not bear any relationship to the company's contribution to GDP
•    Or, non-public numbers such as production units or employee costs, which make it challenging for stakeholders (investor, analyst or other) to track progress against the target or hold the company accountable for achieving it.
•    Opaque when it comes to the annual reduction targets derived from a multi-year commitment (only eight of the Global100 have an annual target applied over a number of years, according to the study cited above), making it hard for investors and other stakeholders to keep track of corporate progress against the commitment.

The following graph compares the current GHG reduction trajectories of a sample of IT leaders with global scientific and policy recommendations. It is evident that while some corporate targets are less aggressive, others are impressively ambitious in the early years (for example, Dell). But because of the short-term nature of the commitments and lack of a clear long-term goal, it will be challenging for these companies to keep up this pace. We instead recommend a steady and purposeful approach that is grounded in data, follows science and is enduring. 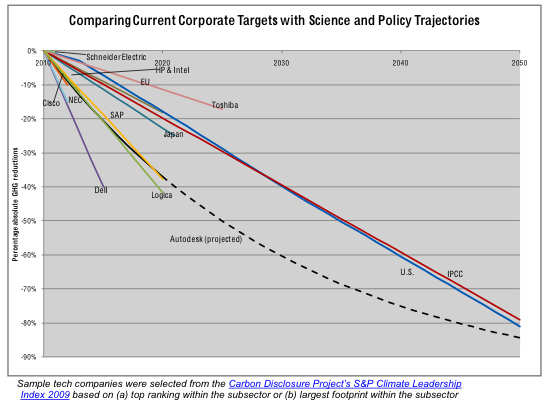 To address these challenges, Autodesk is introducing C-FACT, a transparent, science-driven, business-friendly and open-source approach to corporate GHG reduction. C-FACT is grounded in climate science but recognizes that companies are GHG emitters and simultaneously create economic value. The goal, for those who choose to adopt this approach, is to reduce your GHGs in line with scientific and policy climate stabilization targets but do so proportional to your relative contribution to global GDP.

In 2008, BT announced a Climate Stabilization Intensity model, which introduced the idea that corporate carbon reductions should be set relative to economic value-add.

We have developed a way to operationalize these using universally accepted accounting techniques. Uniquely, C-FACT also adheres to the following three principles:

•    Fairness: Acknowledges that corporate commitments should be proportional to their contribution to GDP and not to the corporations' existing size and footprint. It is nondiscriminatory to companies of varying sizes, GHG footprints, and growth prospects.
•    Verifiability: Uses available financial and carbon disclosure information, enabling 100 percent verifiability of methodology and progress.
•    Flexibility: Adapts to inaccurate financial forecasts, economic uncertainty, organic and inorganic changes in business, and inevitable deviations of real performance versus intended target.

Importantly, C-FACT is compatible with existing techniques for financial and environmental measurement systems. It is aggressive only to the degree needed to attain climate stabilization, but is data driven and grounded in science.

If all companies were to adopt C-FACT, private sector emissions would be on track to help stabilize the climate by 2050. We applied C-FACT to a basket of high-tech companies that ranked highest by the Carbon Disclosure Index or had the largest footprint, and found that if they were to adopt this approach, global GHGs could be reduced by a whopping 3,801,112,763 metric tons by 2050, equivalent to roughly 9 percent of the global target laid out by the Intergovernmental Panel on Climate Change.

We hope that other companies will, in the spirit of open source tools, consider this model, analyze its strengths and weaknesses, improve upon it, and then adopt it.

For a video tutorial and White Paper that explains the methodology step-by-step, please go to www.autodesk.com/c-fact.

Emma Stewart is sustainability senior program lead at Autodesk, where she combines expertise in environmental trends analysis, policy and metrics design, and management consulting. Her work has been covered by the Wall Street Journal, The New York Times, Financial Times, Huffington Post, and Forbes, among others. She holds a BA Honors from Oxford University and a PhD from Stanford University.

Aniruddha Deodhar is sustainability project manager at Autodesk, where he manages the company's efforts to enhance the sustainable design potential of its software products by applying them to its own business and operations. Aniruddha received his M.B.A with Distinction from the Kellogg School of Management and B.A.Sc, Computer Engineering, from Nanyang Technological University, Singapore.

What’s Your Biggest Green Accomplishment of 2009?