How to Unchop a Tree

How to Unchop a Tree

On my last night in Copenhagen, I hosted a gala event on behalf of REDD organized by the Coalition for Rainforest Nations and the governments of Gabon, Guyana and Papua New Guinea.

It was, to be a honest, a long night–more than three hours of speeches and ceremonies, many quite moving but some, again to be honest, repetitive and overlong.

This crowd of environmentalists really didn’t need to be told that climate change is bad and forests are good. Come to think of it, I may have said those things myself at one point. Oops.

The point is, we need to find more creative ways to communicate about the climate crisis. One example is the beautiful three-minute film below from Maya Lin, called Unchopping a Tree, which made its public (as opposed to Internet) debut at the event.

The film grabbed everyone’s attention, and for good reason. (If you click on the arrows at bottom right, you should be able to watch the video in full-screen mode.) If for some reason it doesn’t play well on this blog, you can check it out here or at Maya Lin’s What Is Missing? website which is worth a visit.

Maya Lin - Unchopping a Tree from What is Missing? Foundation on Vimeo.

It gave me great a deal of pleasure to introduce Maya Lin because, although we’d never met before, I felt connected to her.

The Vietnam Veterans Memorial, which she designed as a 21-year-old undergraduate at Yale (she won a “blind” public design competition), stirred enormous controversy when it opened in 1982, but is the most powerful memorial and maybe the most successful piece of public art that I’ve ever seen. As someone who lives just outside Washington, I’ve visited it many times and it is unfailingly an emotional experience.

Maya Lin calls “What Is Missing?” her last memorial and explains on the website:

Imagine a memorial that exists not as a single, stationary monument but that exists in several mediums and places simultaneously. What Is Missing?, my last memorial, is a multi-sited artwork dedicated to bringing awareness to the current crisis surrounding biodiversity and habitat loss. It will bring attention not just to species that have gone extinct but to things we do not realize we have lost...

What Is Missing? is a science-based long-term, ambitious project whose components include permanent sculptures, traveling exhibits and offline and online media. Two examples: Last fall, “Listening Cone,” in which visitors can hear the sounds of extinct species and read about their history, was installed at the California Academy of Sciences in San Francisco. On Earth Day, a five-minute video will debut on MTV’s billboard in Times Square and, presumably, on the network and the Internet as well. 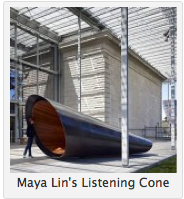 There’s no doubt in my mind that What Is Missing? will engage people in ways that neither the written nor the spoken word can. This is not to take anything away from our speakers last night – they included Jane Goodall, Bianca Jagger, fashion designer Vivienne Westwood, Indian wind-power magnate Tulsi Tanti and UN enviro chief Achim Steiner, as well as, very briefly, Frances Beinecke of NRDC, Mark Tercek of The Nature Conservancy and Carter Robers of WWF. A great lineup, to be sure.

But art and music simply communicate in different ways. We need more art and music about the climate crisis and, perhaps, fewer words.

Speaking of which, I also thoroughly enjoyed our opening and closing musical acts: O-Shen, a singer and musician raised by American parents in Papua New Guinea, opened the show, and the guitarist and singer Baaba Mal of Senegal first hushed the crowd (it was past 11, and people were getting restless) and then entranced everyone. Baaba, by the way, seems to be  a really nice guy, as well as a great entertainer.

Here are the credits for the What Is Missing? video:
©What is Missing? Foundation
Produced by @radical.media
Music donated by Brian Eno and Brian Loucks
Support provided by The Betsy and Jesse Fink Foundation, Louis Bacon, Moore Charitable Foundation, Rockefeller Brothers Fund

It's not easy being a (green) thought leader