The first two weeks of the new decade have found widespread government, industry and academic support for applying IT's power to the greening business operations -- while also cutting the power needed to run the plugged-in world.

The numbers, announced last week, are a far cry from the billions handed out to banks last year, ostensibly to keep the economy afloat, but when the Department of Energy awards $115 million in grants for green IT projects, it's a sign of progress. And the government followed it the next day with $2.3 billion in tax credits to stimulate the creation of jobs in cleantech industries, notably those areas that are bringing IT to bear on corporate and individual energy efficiency: The smart grid and building energy efficiency.

I spoke with one of the companies that landed a chunk of money from the DOE this week to learn more about their particular grant. Lineage Power, which harkens back nearly a century to the old Bell Labs and AT&T innovation centers, received a $2.4 million grant to work on boosting energy efficiency in the telecom industry. 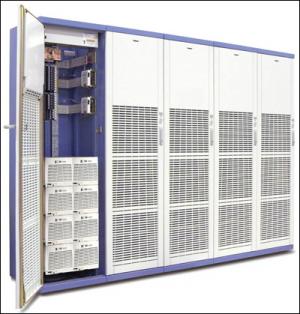 Mark Johnson, Lineage's head of research and development, explained that their project has two elements: hardware and software. First and foremost, the company is working on improving the efficiency of their three-phase, 480-volt / 220-amp rectifier (Lineage's rectifer is pictured at right), which converts AC power to DC power. Lineage believes it can cut wasted energy in half, going from 93 or 94 percent efficiency to 96 or 97 percent efficiency.

While that may not sound like a huge improvement, Johnson and Trent Waterhouse, Lineage's VP of marketing, said that if the new rectifier was adopted by the telecom industry at even the relatively slow rate of 4 percent per year, it would save about a billion kilowatt-hours of energy per year by 2020.

The other element of Lineage's grant involves working with Verizon to install a new software system that can remotely monitor the rectifiers in some Verizon facilities to improve energy efficiency.

The two threads of this project can make a significant dent not just in energy use, but in the associated costs: Waterhouse said that Verizon spends a billion dollars a year just cooling their network, so less heat from wasted energy will mean even less energy needed to cool their equipment down.

Above and beyond the money the federal government put toward green IT, this week also saw the launch of an ambitious project spearheaded by the current Bell Labs and its parent company, Alcatel-Lucent.

The Green Touch initiative starts from the idea that electronics currently use 10,000 times more energy than they need to, and aims to cut that number down by 10 percent in the next five years.

Five years to make IT 1,000 times more energy efficient is a pretty tall goal, but with the backing of a number of research organizations and telecom firms including China Mobile and Telefónica, it's a goal that may well be within reach.

These two big examples from 2010 primarily showcase how IT efficiency is moving beyond the data center to include the networked communications that are increasingly a part of the world's daily activities. And those examples could easily expand to include some of the innovations showcased at CES in Las Vegas, highlighting how improvements in technology and increased concern about wasted energy (or, perhaps more likely, concern about high utility bills) are leading to more commonplace green technologies for the home.
{related_content}
But this week we also saw how IT can move beyond even traditionally technological industries to save money and boost sustainability efforts. At the National Retail Federation's annual convention, SAP sustainability chief Peter Graf spoke on how technology can boost efficiency in retail environments.

"I find [green IT] a little bit exaggerated. Green IT is usually positioned as reducing the energy consumption of the datacenter," Graf said at the panel, according to a writeup from IDG's news service. "I'm not dismissing it, but the real opportunity is in logistics, production, in distribution and production."

Graf goes on to discuss the benefits of applying computing power to logistics, to measuring and reducing inefficiencies and waste in the supply chain, all of which are textbook examples of "green IT 2.0."

These first two weeks of the new decade are just building off all the green IT developments of 2009 and earlier, but it is looking more and more likely to me that we're at the beginning of a confluence of factors: Between the new frugality brought on by the crashing economy (a frugality that will take some time to abate, even as the economy revs back up) and corporate and governmental commitments to reducing emissions across the board, 2010 is almost certainly the beginning of the Green IT 2.0 boom.

Top Tips for Greening Your Network

Why this cold storage warehouse operator warmed up to artificial intelligence

ICYMI: GM takes a stand on carbon, a map of U.S. innovation, & more