It's time to review last year's bio-inspired products and services and pick my favorites, and, since this is my “sandbox,” I have decided to shamelessly name my awards the Tommies.

I have also decided to give the awards to the creatures that inspired the innovation, rather than the human inventors. As a consolation, however, I will offer to buy each human an Irish coffee at the Buena Vista Bar here in San Francisco. Email me; I would be honored to talk to each of you, whenever you visit!

The penguin, in the strictest biomechanical sense, doesn't really swim underwater, but rather flies. That is, the creature gets both lift and thrust from the action of its flapping, planar wings. It has inspired the latest development in robots highlighted by the German engineering firm Festo AG at the Hanover Messe Trade Exhibition in April.

The Aquapenguin (right) mimics the hydrodynamic body features of the bird and is made with soft material and glass fibre rods, a motor and 3D sonar device by Evologics of Berlin. These allow the bot to swim with great flexibility and avoid collisions with obstacles or other swimmers, important in situations demanding a high degree of flexibility and autonomy. Festo has already developed a commercial product, an industrial arm with a gripper end, based on this technology.

The manta ray also flies underwater and inspired another Festo product that took to the skies. The Air_ray (below) is a remote-controlled helium-filled ballonet made of aluminum vaporized PET foil and shaped like the ray. It contains a small servo that beats its 6-foot wings with a clever linkage mechanism modeled after the tail

fins of many fish. Two alternating pressure and tension flanks are connected by ribs. When one flank is pressured, the structure bends from its geometry in the direction opposed to the force. While super light (the buoyancy of the helium can only support 1.6 kg of weight), the Air_ray can perform some simple maneuvers including loop-de-loops and flying backwards. The slow moving Air_ray can also carry a camera.

The Morpho butterfly, along with many other insects and birds, exhibits brilliant colors because of the nanostructure of the microscopic scales on its wings. White light is broken up by this surface. Its component colors, of different wavelengths, are bounced back in a different array. Some colors cancel each other out which is why you might see the shifting hues in a peacock's feathers. This phenomenon inspired the structural color display Mirasol (next page), developed by the Qualcomm Corporation.

Qualcomm engineers looked at this occurrence and devised a way to mimic this so-called interferometric process. Using a MEMS (micro-electro-mechanical 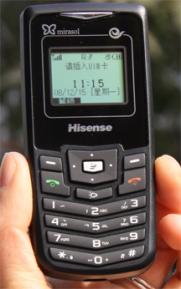 system), engineers have designed a reflective device that opens or closes tiny gaps between a mirror and a glass plate in a tiny pixel. This allows a predetermined wavelength of light to emerge or be suppressed. A display will contain thousands of these pixels adjusted to reflect either red, green or blue. How these are programmed will determine the ultimate picture.

Readers may recall that another company, Teijin Fibers, Ltd. of Japan, saw a different application for structural color displayed in the Morpho. Since 2003, the company has sold its Morphotex line as a fabric or a powder coating for paints.

In the fabric, thin films of 70 nanometer thickness consisting either of polyester or nylon are laminated in 61 layers alternatively. Four types of basic colors such as red, green, blue and violet are allowed to be developed by precisely controlling the layer thickness according to visible wavelength. In items made from the fabric, the result is a shimmering of different colors expressed when the angle and strength of light changes. These products were the result of intensive research, begun in 1995, together with Nissan Motors and Tanaka Kinzoku Kogyo. 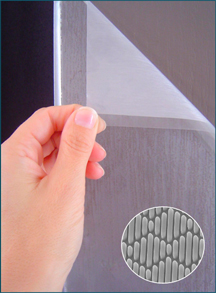 The shark has often inspired biomimetic innovations, from fighter jet tailfins to swimsuit textures, because of its hydrodynamic qualities. Sharkskins are also remarkably free of algae and barnacle growth. Sharklet Technologies has developed a nontoxic material for hospitals and schools that resists bacteria growth because of its structure. Millions of microscopic diamonds are arrayed in a way that the company claims can prevent formation of biofilms for up to 21 days. This “no-kill” approach is especially important in medical environments because it avoids the growing problem of promoting resistant strains of infections by the artificial selection of biocides. The company's Safetouch product (left), a self-adhesive film, was named one of the best innovations of 2009 by Inc. magazine.

The dolphin can swim up to 33 miles per hour and can use up to 80 percent of its energy to generate thrust. These capabilities inspired Ted Ciamillo, an inventor from Georgia, to design the Lunocet (above left), a 2.5-pound monofin made of carbon fiber and fiberglass that attaches to an aluminum foot plate at a precise 30-degree angle. The fin is almost four feet wide and can propel a swimmer at eight miles per hour, nearly twice the speed of Olympic gold medalist Michael Phelps.

Fish that school together form intricate patterns at high speeds without ever bumping into each other. This ability inspired the Nissan Corporation to develop the Eporo car (right) by studying this behavior. The innovation offered is the ability of a group of vehicles to travel safely together, avoiding collisions and delays.

Engineers at Nissan learned that fish are able to school because of their lateral line sense and their sight and because of three simple individual behaviors that cause the emergence of the group phenomenon: collision avoidance, maintaining relative distance to your neighbors on your flanks, and closing any gaps to distant fish. They substituted laser range finder technology for the natural lateral line mechanism, and ultra wide band (UWB) radio communication for sight, and programmed the three algorithms into the controls of the vehicles. Six vehicles were demonstrated at the CEATEC JAPAN 2009 Exhibition at the Makuhari Messe in October.

The rat inspired researchers at the University of Bristol Robotics Laboratory in the U.K. to construct the Scratchbot (below), a whiskered search and rescue robot that relies on flexible sensors, rather than cameras, to assess dark, narrow spaces. Six years in development, it has 18 whiskers that move back and forth five times per second. Sensors detect the allowed sweep of the whiskers and reposition the robot toward surfaces that have been contacted. The Scratchbot can then determine the edges of the space 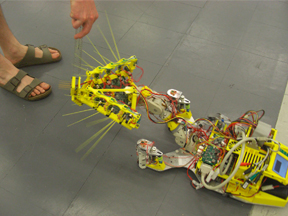 and outlines of obstacles, including unlucky victims. The device recently won a Best of What's New for 2009 award from Popular Science Magazine.

Finally, the slime mold, Physarum polycephalum, must take top honors at the Tommies this year for the part it had played in the discovery of memristors. This past year, HP Labs of Palo Alto, Calif., announced that engineers there had advanced their discovery and successfully grafted a memristor array onto a standard silicon chip, and that commercial production could be anticipated in the near future. Memristors were the missing fourth passive circuit in electronic circuit theory predicted by Leon Chua of U.C. Berkeley in 1971: A resistor that could remember what current had previously flowed through it. It has been likened to a pipe that changes diameter according to the volume of liquid flowing through it.

Physarum is a colony of single cell organisms that could sense, react and anticipate conditions as they were imposed by research scientists at the Hokkaido University. Explaining this behavior, done without a brain or central nervous system, was a puzzle that was made easier when scientists realized that they might be looking at an organic form of the memristor, where basic physical properties of materials within the cell change with different external conditions.

The impact of the linking of brilliant, logical theorizing with careful biological research and tenacious engineering development cannot be overstated. Memristors will revolutionize computing and the way that scientists and engineers approach artificial intelligence and mimic the human brain. If it had a head and shoulders, Physarum would be standing that much taller than our other awardees.

All images courtesy their respective companies.

How the business of biomimicry is happening at the zoo