Apple to Take a Bite Out of Home Energy Use?

Apple to Take a Bite Out of Home Energy Use?

Can Apple do for energy efficiency what it did for smartphones?

Although the tech world is abuzz with the much-hyped and much-prophesied Apple ("iSlate?") Tablet, which people expect to be released later this month.

But the website Patently Apple has uncovered a patent filed by the company that suggests Steve Jobs may be looking to move into greener pastures: Home energy management.

The "Smart Home Energy Management System," as Patently Apple calls it, covers a number of areas, including this drool-worthy idea for gadget lovers:

[The device could turn] every power outlet in your home or office into a conduit for audio, video and data. Wireless technologies could be prone to dead-spots and fading -- but with HomePlug certified adapters you just plug them in and within minutes you have high speed internet coming out of every plug in the house. You could do the same thing for HDTV and iTunes.

But there's more to it than just making the home (or business) even more wired than it already is: Apple's patent also covers a device that can control the amount of power that flows to a device, making it possible to turn down or off any electronics that aren't in use. The flowchart below details how an Apple-enabled home might control the power used by electronics. 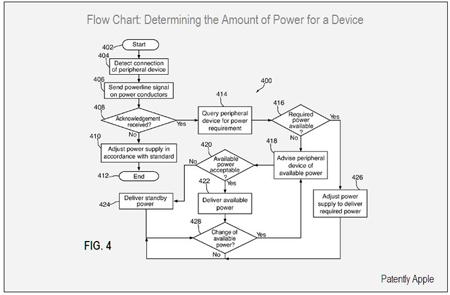 Apple's patent follows on the launch of Google's PowerMeter and Microsoft's Hohm, both of which apply computing power to reducing the power used by electronics.

As Martin LaMonica writes on CNet:

One patent application called "Intelligent Power Monitoring" says that the system would allow people to reduce energy use by giving them tools to better control how connected devices are powered.

Consumers could get recommendations on when to schedule gadget charging to take advantage of off-peak rates, for example. Or the electronics controller could put devices in hibernate mode after a set amount of time.

Users could have a display, such as an LCD screen, or a movable projector to control these tasks and monitor electricity use.

Apple's move showcases how quickly we're moving forward with smart-grid technologies; with three major tech players working on home-energy management devices, and working with utility companies to help them reduce demand on the grid, the smart, connected home is just around the corner.

And can you imagine the kinds of innovations that an Apple home-energy dashboard could bring to a wired home? If the company opens up this new tool to the developer community like it has the iPhone, the possibilities are truly limitless.

Pulling the Plug on Phantom Power