The subject was “bones” last Friday at the Museum of Vertebrate Zoology at the University of California, Berkeley. Alan Shabel, of the Integrative Biology Department, was explaining his work and the museum's collection to a group of designers from Chris Smith and David Cole's wonderful Aesthetic Immersion class from the California College of the Arts. I was tagging along as the deliriously happy gawker, for we were in the inner sanctorum of the museum, the bone room.

Row after row, shelf after shelf, of artifacts: Lion skulls and whale baleen, grizzly footprints and elk antlers, dinosaur fossils and hippo jaws. All carefully catalogued and arranged, all intriguing and instructive. The collection is one of the nation's largest and comprises specimens of all the types of tetrapods. If it's an animal with four limbs connected to a spine, it's a safe bet you can find a specimen of it here: Bird, reptile, amphibian or mammal.

Bones are both so familiar and so foreign to us. We are partly made of this material and have worked this substance for millennia, well aware of its superior properties as a tool. Strong, light and durable, examples of picks made of antlers have been found in the ancient mines of England. 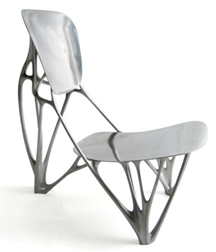 Despite its commonplace occurrence, however, the material we know as “bone” is a wonder of complex properties, something that scientists and engineers have only now begun to emulate. Below is an example of how a group of researchers has mimicked these properties in a groundbreaking invention.

First, a few words about this connective tissue. Bone could be described as the ultimate smart composite. Made up of specialized cells and protein fibers, it is as strong as steel and as light as aluminum. It also reacts to external forces, constantly changing to resist stress or repair injury. Just as many of us forget that our skin is an organ (our largest), so too, do we forget that our bones are alive. Blood, oil, and nutrients flow through healthy bone continuously; new cells are being produced while old cells are eliminated. Indeed, it is within bone marrow, a long bone's inner core, where you manufacture blood cells for your entire body.

All bone is not created equal. While its recipe of specialized cells, protein fibers, carbohydrates, mineral crystals and water is basic, it can be adjusted in proportions and array. A typical leg bone, therefore, might be better thought of as a system of inter-working parts than as a single entity. Surrounding the marrow core, or medullary canal, is a layer of spongy or cancellous bone. The open matrix of this material also contains marrow, and the bony struts or trabeculae within evolve to orient along the stress lines imposed on the overall structure. Outboard of this cancellous bone is a layer of compact bone: hard, strong and shell-like because of its greater density of crystals. Like all structures in the cellular-based living world, this material has been built up from the very small into a larger, complex structure. Osteons are the rod-shaped building blocks of this material, each formed, in turn, of concentric rings of lamellae, each surrounding tiny blood vessels and nerves and each with allowed gaps to service cells. Like the wires in a steel cable, these osteons are bundled together for a strength much greater than the individual components. Surrounding this cortical bone is the periosteum, a thin, fibrous membrane that serves to anchor tendons and ligaments, nourish the bone and aid in repair. It is connected to the marrow core by tiny, blood vessel-filled canals.

The familiar bulges on each end, the epiphyses, are made largely of spongy bone. They absorb shock and form the bending joints between bones. The epiphyses are joined to the shaft of the bone by the epiphyseal plate, a cartilaginous area where new bone is grown. As R. McNeill Alexander points out in his great book, “Bones,” evolution has solved a knotty problem here: How to keep the joints working and still grow a shaft longer? The answer is to do your growing behind the relatively unchanged butt ends. When you no longer need to grow taller, around age 18 for most of us, this plate solidifies into the hardened bone typical in the shaft and bulges on either side.

First, shape forms to strength: Material is expensive and so is the energy used to make it, so ideally you will want to put the material where it is needed and take it away from where it is doing no good. Living bone is actually doing this all the time, and some designers have mimicked this process.

Claus Mattheck, who wrote "Design in Nature: Learning From Trees" after studying the growth patterns of trees, works at the Department of Biomechanics, Institute for Materials Research, Karlsruhe Research Centre in Germany. He has developed the well known Computer Aided Optimization (CAO) and Soft Kill Option (SKO) software, in which iterations of form design evolve a jettisoning of unneeded material.

Daimler AG's Bionic Car (the “Boxfish” Car, below right) was designed using these software programs to lighten the frame without sacrificing strength. Joris Laarman of Rotterdam, Netherlands, designed his “Bone Chair” (previous page) using a similar growth algorithm software program. The similarities of how bones and tree limbs solve structural engineering challenges continues to inform, as we will see below.

Second, solutions are woven into a hierarchical structure that solves a problem at multiple scales. The osteons are an example of strength being magnified at all scale levels.

Third, adaptable forms come from feedback-driven processes. The spongy bone is an example. Karl Culmann, the famous head of the The Swiss Technical University in 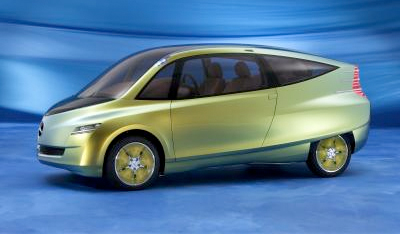 Zurich, is reputed to have visited a physician friend engaged in cutting a section of a femur and exclaimed, “That's my crane!” He promptly returned to his drawing board to design a lifting device inspired by the evident lines of tension and compression writ within the bone's fibers. Culmann's work was a direct inspiration for the form of the Eiffel Tower, and established a long tradition at the engineering school.

Fourth, contradictions are often solved by the innovative combination of simple materials. In the case of bone, the basic recipe contains both hard crystals of calcium phosphate, and soft fibers, mostly of the protein collagen. How the chemical recipe is tweaked determines the properties of the bone type, but so too, how the material is arrayed. The open matrix of the cancellous (spongy) bone is very different from the bundled rods of the cortical (compact), but the basic ingredients are the same.

If imitation is the strongest form of flattery then researchers at the Institute of Science and Technology for Ceramics in Faenza, Italy, could be called rabid bone fans. They have developed an artificial bone material after studying another natural substance, wood. Taking rattan, which had a similar matrix structure, they heated it under high pressure while calcium and phosphate were added in order to generate the synthetic substitute. The new material is carbon-dense, load-bearing and durable and is structured so similarly to human bone it becomes accepted by the body and fuses with the original bones.

As we discussed, bone relies on a porous structure to supply blood and maintenance cells, tissue and nutrients to its living structure. In the synthetic material that porosity is preserved, and real bone eventually fuses with the artificial. According to the researchers, it becomes eventually almost impossible to see the transition between the old bone and the new addition. If testing results continue to be so positive, this is a giant stride in surgical techniques, and a great example of comparative study and biomimetic application.

Shape means strength, from a Boeing Dreamliner to a Bone Chair