Disney's Epcot Center -- the Experimental Community of Tomorrow built ... last century -- may seem an unlikely place to put a shiny new data center, but IBM thinks it's the ideal location.

The company lifted the curtain today on a new exhibit that showcases to facets of IBM's operations: its Smarter Planet project, and its green data center operations.

IBM's exhibit includes interactive kiosks showing how information technology touches nearly every facet of a more connected, more energy efficient future, from the smart grid to home energy management to traffic flow systems to water mapping and management. The exhibit also features a computer game developed with Disney Imagineering called Runtime that, according to a press release, lets players "run, jump and dance through a timeline of IBM's achievements in the history of computing." 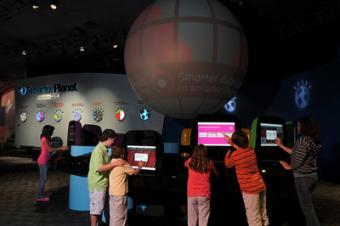 If all that sounds a bit mass-market, consider the other half of the exhibit: One of IBM's scalable modular data centers (SMDCs), which in addition to being a hands-on element of the exhibit, is also running the show.

Steve Sams, IBM's vice president of Sites and Facilities, told me that the data center had always been part of the plan -- it was needed to run the games, after all -- but had originally intended be stay behind the scenes. But the setting of the exhibit lent itself to the shift.

"When you profile the Epcot visiting community, it contains -- especially in the technology exhibits -- it contains a relatively sophisticated audience," Sams explained, "people who are interested in technology, in the environment, in healthcare."

The SMDC, pictured below, is one of the jewels of IBM's IT services. It is, as the name suggests, a data center that can be quickly built to specs for companies large or small, and can then be scaled to meet demand. 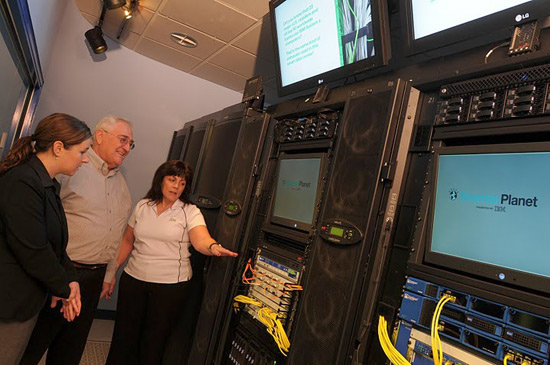 Rather than build a data center that is intended to last for 15 years -- and which as a result contains cooling, lighting and infrastructure for machines that won't even be purchases for years to come -- the shift to a scalable facility means companies can save big on upfront capital expense costs and on operating expenses.

In addition to saving energy by powering only what you need, the SMDC is designed for maximum efficiency. IBM says that its SMDCs can run on 25 percent less energy than a similarly sized conventional data center.

IBM's choice to put the SMDC at center stage in this Epcot exhibit is telling: It reflects, and is a response to, the expansion of the types of people and companies that are now or will soon be in the market for a data center.

Ten years ago only a rarefied group of companies needed dedicated data centers. But with the growth of internet-based applications and operations, remote workplace and telepresence capabilities, and increased data storage needs, data centers are becoming, if not commonplace facilities, at least much more common than in the recent past.

And the rise in interest in scalable and modular computing facilities reflects that. Sams told me that surveys of IBM clients found that when SMDCs were first announced two years ago, only 12 percent of clients or potential clients would consider the technology. In a just-concluded survey, that number has now grown to 80 perent.

I will have more from my conversation with Sams next week, but in the meantime, if you needed a reason to go to Disneyworld, there you have it. You're welcome.