When it comes to the energy, Randy Zwirn doesn’t play favorites. As CEO of the global energy service division of Siemens and president of Siemens Energy, Zwirn has a stake in the coal, nuclear, gas, wind and solar industries, as well as the smart grid and transmission business.

It’s a big stake, too. When we spoke today, Zwirn told me that one-third of all the energy-generating capacity in the U.S. uses Siemens’ power-generating equipment. Impressive. Siemens Energy employs about 12,000 people in the U.S., mostly in manufacturing and services.

Siemens has factories that make rotor blades and nacelles for wind turbines in Hutchison, Kansas, and Fort Madison, Iowa. It operates a factory that makes turbines for gas-powered plants in Charlotte, N.C. In nuclear, after pulling out of a joint venture with Areva in which it was a minority partner, Siemens has formed a partnership with Rosatom, a fast-growing state-owned atomic energy firm in Russia. Last year, Siemens bought a 40 percent stake in Arava, an Israeli firm that makes utility-scale solar thermal power plants. That’s a business that should work in the southwest U.S., Zwirn says. 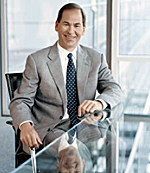 As for coal, Siemens has turned to the U.S. Department of Energy for help in going forward with projects designed to capture and store carbon emissions from coal plants. It’s working with Tenaska, an independent power producer, on a $3,5 billion – not cheap! – clean coal plant under development near Taylorville, Illinois. That plant has been selected by DOE for a loan guarantee of up to $2.5 billion.

Meanwhile, DOE has provided a $350 million grant for a coal plant near Odessa, Texas, proposed by Summit Energy that will use Siemens gasification and power generating technology. “We need to figure out a way to utilize coal,” Zwirn says.

(Much as I am tempted to editorialize here, I’ll reserve for another day the question of whether subsidizing clean coal plants is a good use of your tax dollars; like it or not, it seems as if every single form of low-carbon energy generation -- wind, solar, nuclear, clean coal -- is seeking help from Washington. If I’m wrong, and you’re aware of a low-carbon energy project going forward without benefit of subsidies, please let me know.)

Zwirn’s a straight shooter, so I’m delighted that he has agreed to speak at FORTUNE’s Brainstorm Green conference in April. You can listen to a podcast of our conversation at The Energy Collective; what follows are edited excerpts. I began by asking him about President Obama’s State of the Union speech.

Zwirn:  I was encouraged by the president’s approach. For the first time I heard a discussion around a diverse mix of environmentally compatible energy solutions.  The discussion in the past was narrowly focused around renewables. Yesterday the president talked about clean coal, about nuclear, about the importance of offshore, as well as renewables.

Q: And you are in all those businesses. What’s the scale of Siemens Energy in the U.S.?

A: It’s our single largest market. We don’t break regional sales figures out, but I can tell you that our installed capacity represents about one third of all the generating capacity here in the United States, somewhere around 300,000, 325,000 gigawatts of installed capacity.

Q: What’s been your biggest business, in the year just ended?

A: The year was heavily impacted by the economic crisis, particularly a scaling back of cap-ex (capital expenditure) spending by the major utilities and a reluctance of the banks to take on large project finance deals.

What we saw this year was a strong market in servicing of existing power plants. Modernization and efficiency upgrades made even more sense than usual to the marketplace because their cap-ex requirements are much smaller.

As far as new capacity, we’ll see somewhere between 8,000 and 9,000 megawatts of new wind generation. Actually, wind was a little bit larger than gas last year. That’s was industrywide. And we pretty much reflect the industry in terms of what we sell.

Q: What were you modernizing? Nuclear and coal plants?

A: Correct. If you look over the last five to seven years, we’ve either implemented or are in the process of implementing about 3,000 megawatts of nuclear upgrades.  To put that into context, that’s the equivalent of three new nuclear power plants.

Q: Let’s assume we need more baseload generation around the world to deal with growing energy consumption. Which is the best approach—nuclear, coal or gas?

A: You have to break the discussion down to the medium and the long term.  At the end of the day, we need to find a way to utilize coal in a clean and efficient and environmentally compatible way. However, for the next five to seven years, we’ll see that most of the new fossil-generating capacity large plants are probably combined cycle gas-fired plants. Here in the U.S., it’s really difficult if not impossible to permit a new coal-fired plant today without carbon capture.

Carbon capture is necessary to make coal more attractive but we’re probably looking seven to 10 years out before the projects we’re demonstrating today are really commercialized, allowing coal to play a bigger role. So in the next few years, it’s gas turbine and wind market.

In the long term, I’d say it’s a race between nuclear and coal with carbon capture for the true baseload generation.

Q: Outside the U.S., there’s more appetite for nuclear, right? Or at least more speed in getting plants going?

A: Speed, for sure. If you look in China, there are, I think, about 30 nuclear power plants either in advanced stages of planning or under construction. As you know, the Emirates just awarded a nuclear contract to a Korean consortium. The Russian manufacturer Rosatom has 15 plants under construction.

Nuclear in the zero-carbon future has a very important role to play. I was pleased to hear the president reconfirm the importance of nuclear.

Q: A final question about U.S. government policy: Siemens, as a member of the U.S. climate action partnership, supports cap-and-trade regulation of greenhouse gas emissions. Besides that, what would you like to see the U.S. government do to speed the transition to a clean energy economy or, at least, develop a coherent energy policy?

A: In the short term, I’d like to see them speed up a little bit the grants for smart grid and other energy projects that are part of the stimulus package. The money’s there but they need to get the rules clarified and get that money deployed. Only a small portion of the stimulus has actually been spent.

For the longer term, carbon will most certainly became a regulated pollutant. We need a price signal, given to the market, on carbon.  It’s a difficult topic to deal with right now. But getting to a low carbon economy is going to take a generational change. To get companies like Siemens to invest in carbon capture technologies and clean coal technologies that probably will take another 10 years before they can really be commercialized, we need clear signals that those investments are going to make sense.

It's Time to Re-Think Nukes