Nukes: Why Small is Beautiful

Nukes: Why Small is Beautiful

If anyone tells you they know what building a new nuclear power plant is going to cost, be skeptical.

No one has built a commercial nuclear power plant in decades in the U.S. During the 1970s and 1980s, cost overruns derailed more than 100 reactors. (Ever-increasing regulatory burdens and sky-high interest rates drove up costs, too.) In part because no reactor has built here in so long, no bank or group of banks wants to take on the risk of lending more for a new plant.

That's why the Southern Co., which plans to build two new reactors in Georgia, needs the $8.3 billion in U.S. government loan guarantees announced last week by President Obama. While all the other worries swirling around nuclear power -- what to do with the waste, fear of proliferation, the threat of terrorism, safety and the rest -- play some role, the most important thing standing in the way of a so-called nuclear renaissance in the U.S. is that building big new plants costs too much money.

And yet, if we want to stop burning coal, the dirtiest fossil fuel, to generate baseload electricity, we need to explore the nuclear option. That means finding ways to bring down the costs.

Small nukes -- sometimes called backyard nukes, because some of them could literally be buried in a suburban yard -- were the topic of an excellent front-page story last week in The Wall Street Journal ("Small Reactors Generate Big Hopes," subscription req.) and a panel discussion the following day at the Platt's nuclear energy conference in Bethesda, Md.  Small nukes are a hot topic right now because three utility companies -- Tennessee Valley Authority, First Energy Corp. and Oglethorpe Power Corp. -- have agreed to work with Babcock & Wilcox, a longtime industry supplier, to get a small reactor design approved by the U.S. Nuclear Regulatory Commission. 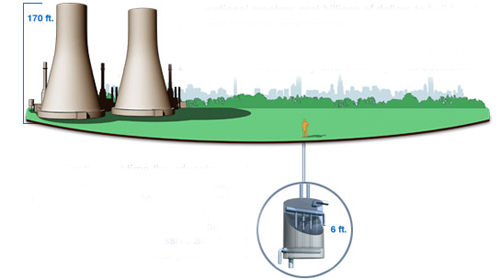 The Babcock & Wilcox reactor, called mPower, would generate 125 to 140 megawatts of power, about a tenth as much as the big plants being proposed by the Southern Co. and others. Other modular nukes are even smaller: NuScale Power, a venture-funded startup, wants to build a reactor that's 65 feet long and 15 feet in diameter, capable of generating 45 MW of power. Another startup, called Hyperion Power, is touting  a 25MW reactor, which would be compact enough (5 feet across by 12 feet high) to fit in a pickup truck, yet powerful enough to supply about 20,000 homes.

What's driving interest in small nukes? "The desire to break up the very large upfront capital costs" of conventional nukes, said Daniel Ingersoll, a nuclear engineer at the Oak Ridge National Laboratory, at the Platt's event.  Like wind turbines or  solar panels, small nukes can be ordered sequentially by a utility company -- reducing risk, and allowing profits from the first reactors to pay for those that follow.

"I think we're on the verge of seeing a paradigm shift in power generation," Ingersoll said.

Perhaps, but it will be a slow one. The NRC will take years to approve the design of a small nuke, and whichever company builds first will then need years to deploy. Of course, everything in the nuclear industry moves slowly.

Babcock & Wilcox, which is based in Lynchburg, Va., appears to be farthest along because it has interested customers, a big power-generation business and a history of supplying nuclear products and services to the government. Even so, according to Michael Shepherd, vice business of business development, B&W's first small nuke could be a decade away. "We see construction in 2016," Shepherd said "We can see going online in 2019, 2020."

As startups, NuScale and Hyperion can move quickly but it's not clear whether they have the financial wherewithal, customer relationships or experience with the NRC to succeed. Both are using government-funded designs -- Nuscale, which is based in Corvallis, Ore., is using a design licensed from the Idaho National Laboratory and Oregon State, while Hyperion, which is based in Santa Fe, N.M.,  licensed its design from the Los Alamos National Laboratory, where the atom bomb was invented.{related_content}Paul Lorenzini, the founder and CEO of NuScale -- he's a lawyer as well as a nuclear engineer -- said his company's design relies upon proven technology and will sit in an underground pool of water. "We get simplicity," he said. "And out of the simplicity, we get safety and we get economics."

Deborah Deal Blackwell, senior vice president at Hyperion, said small nukes could be used to deliver power to remote communities that are off the grid or to poor countries that desperately need electricity for schools, hospitals, transportation and water treatment. The Hyperion nuke would be loaded with enough fuel to last 7 to 10 years, then returned to the factory for refueling.

It's exciting to see the entrepreneurial energy behind backyard nukes, although whether any of them will, or should, get built remains an open question. We'll hear more during a panel dubbed "Nuclear 2.0″ at Brainstorm Green, FORTUNE's conference on business and the environment, which will be held April 12-14 in Laguna Beach, CA.  I'm pleased that Paul Lorenzini of NuScale and John "Grizz" Deal, the CEO of Hyperion, have agreed to speak, and I'm recruiting a speaker from Babcock & Wilcox as well. We'll have supporters of big nukes, like NRG Energy's David Crane, at the event, and some of America's most important environmental leaders will be there as well, so the discussion is bound to be lively.

It's Time to Re-Think Nukes