Technological advancements based on nature seem to appear every week and it is a challenge to keep track of them all. It is also a challenge to analyze their worth. Two useful questions are: Is the product truly biomimetic in the first place, and will it yield real, quantifiable benefits?

Gunter Pauli of Zero Emissions Research and Initiatives (ZERI), thinks that biomimicry is appealing and includes a lot of “nice, romantic ideas.” He was quoted recently as saying, however, that some phenomena, like the abalone shell, are much too complicated to provide any real short-term commercial value.

He has made the point that only three products that can be linked to bio-inspiration have yielded more than €100 million ($136 million) a year in turnover. According to Pauli these are: Velcro, hypodermic needles from Terumo Corporation that were modeled from the mosquito, and self cleaning paints using the Lotus effect.

Velcro, a conflation of the words velours and crochets, was patented in 1951, by Georges de Mestral, a Swiss engineer who took the time to examine the seed burrs of the Burdock plant that had become entangled in his dog's fur. Famously employed by NASA, this fastener system is now ubiquitous.

Designing ultra-small needles has been part of the Terumo Corporation's mission for many years, and it introduced the Nanopass 33 in 2005. It had a tip diameter of 0.2 mm, about the width of two strands of hair. Quite a bit of Japanese funding has supported research into the design and manufacture of tiny sharp cylinders. Researchers at Tokai University, for example, have studied how a female mosquito extracts blood with a labium of 4 mm in length and 30 microns of inner diameter. A micron is one millionth of a meter, and therefore a thousand times smaller than a millimeter.

The Lotus effect was identified by Wilhelm Barthlott of the Nees-Institute for Biodiversity at Bonn, Germany, in 1988 after over a decade of examining the self-cleaning surfaces of many different plants. Its application was patented in 1994. It is the quality of micro roughness on a leaf's surface that causes dirt particles 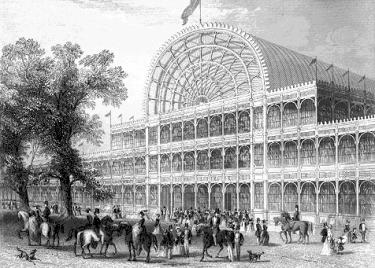 to sit atop the bumps and be carried off by water molecules from rain. In other surfaces the dirt particles would have a greater surface contact with the leaf itself and remain stuck to it rather than adhering to the water droplet as it passes by. Many coating products now contain the formula for this greater water repellency and self-cleaning. First introduced by Ipso, later acquired by Sto Corporation, the innovation is now marketed by several companies.

Pauli's point - that businesses should carefully examine the reasonable return from some of these discoveries - is well taken. I would add, however, a few comments.

First off, he may be right, but only within the narrowest of parameters. If you expand your criteria for judging, you will find historical examples with values that, though hard to quantify, are hard to refute. Two cases from the building world come immediately to mind: the Crystal Palace (1851) and the Eiffel Tower (1889).

The Crystal Palace (above right) was designed by architect Sir Joseph Paxton for the Universal Exposition in London. It was a huge glass and iron truss edifice erected to demonstrate the wealth, might and technical prowess of an ascendant British Empire. Its form was based on the structure of the floating leaf of the Amazon water lily, a two-meter diameter shape supported by radial and transverse ribbing. Two years earlier, Paxton had tested his concepts when building a greenhouse to shelter the plant that inspired its design.

The Crystal Palace was the progenitor of a new era of commercialized light construction, and every glass and steel building today must include it in its provenance.

The Eiffel Tower was designed by structural engineer Maurice Koechlin for the Universal Exposition in Paris. He was a student of the great Carl Culmann of the Swiss Federal Technical Institute. It was Culmann who famously copied the stress lines he observed in a femur bone for the design of a crane. He began the tradition of direct observation and representation of form as a process for design at the university. The Eiffel Tower demonstrates the distribution of stress forces throughout a structure using the concept observed in the femur bone: The 7,000 tons of puddled iron in its 1,063-foot height would fit roughly in a 30-foot cube.

These are not examples of stylistic preference, but of structural innovation directly inspired by natural form and critical to solving a design challenge. In the case of the Crystal Palace, it was the building of huge, open, light-filled spaces. In the case of the Eiffel Tower, it was building the world's tallest structure (at the time) that could resist the forces of wind and gravity. To be sure, these were huge, public undertakings, but their historical and commercial impacts have been enormous.

Here is a fractional indication of this impact: Six million people visited the Eiffel Tower last year and paid about $10 to do it. None of this revenue was needed to cover the long-ago construction costs, of course. It might surprise you to know, however, that the same was true in late 1890; 75 percent of the 7.8 million gold franc construction cost had already been recovered from entrance fees within the first year of operation. That's nearly 120 years of revenue from a building that had already been paid for.

I would also suggest that, although there are few patented brand-name products that are both bio-inspired and dominant in a worldwide market, the search for the high-profile cash cow perhaps misses the point. Spread throughout our built world are bio-inspired forms, processes and systems that have had a huge, cumulative financial impact, whether it is honeycomb reinforcing, jet fighters, biochemical treatments, semi-permeable membranes, agent-based computer search algorithms or artificial intelligence.

Moreover, most businesses employ a variety of strategies for profitability and will still benefit from bio-inspired design solutions even if one isn't in their product lineup. For instance, saving money on building operations and maintenance by using a smart grid and BIM system that might have been inspired by biological self-organizing principles.

As to complicatedness being an obstacle to commercial success, I would remain agnostic. While I would agree that all hurdles should be gauged for height, one shouldn't assume that they are insurmountable. One of Pauli's success stories, Velcro, is a case in point. Although the initial idea was elegant, it took 10 years for de Mestral to design a manufacturing process that could actually make the product. Commercial success depended also on the introduction of a new material, nylon, that could meet the criteria for durability needed for this new type of fabric mechanism.

My point is that innovations in methods and materials continue as one strives for a goal, sometimes providing surprising breakthroughs.

Despite these qualifications, I think it is very useful to look at the business lessons to be learned from these three success stories, and will write more about what distinguishes a commercial success in bio-inspired design in my next article.

Tapping into Nature: Materials that matter