The local food movement is nothing new, of course, and in fact is growing in leaps and bounds in recent months, as evidenced by "local food" announcements from major players including Frito-Lay, Safeway and, yes, Walmart.

These announcements, and many others like them, tend to focus on the raw materials of food -- the fruits and vegetables you get in the produce aisles or at the farmer's market.

But a new project at the California College of the Arts takes a much more holistic view of local food, tracking the miles traveled by every ingredient in that humble but utterly delicious meal, the taco.

Look closely enough at anything and you can start to see the sum of its parts. Even, for instance, a single taco, which, when examined recently by a group of architecture students, became a window into the complexities of globalization. The assignment was part of URBANlab, a program of The California College of the Arts that took place under the guidance of landscape architect David Fletcher and members of the art and design studio Rebar.

The goal was to map the local "tacoshed," which, much like a watershed, establishes the geographical boundaries of a taco's origins—the source of everything from the corn in the tortilla to the tomatoes in the salsa.

By thoroughly understanding what it takes to make a taco, the class hoped to become "better able to propose and design a speculative model of a holistic and sustainable urban future." The final product is a surprisingly useful microcosm of the industrial food system and its "richly complex network of systems, flows, and ecologies." According to the class findings, within a single taco, the ingredients had traveled a total of 64,000 miles, or just over two and a half times the circumference of the earth.

The tacoshed project found some surprising results, and some less surprising. The taco, chosen for being "the absolute most economical option possible," contained some truly local ingredients, including the salt and the cheese. Other ingredients had longer legs, including avocados from Chile and rice from Thailand.

Here's the map of the taco-shed; click the image for a larger version. And be sure to check out the full post over at Good -- "Your Taco, Deconstructed." 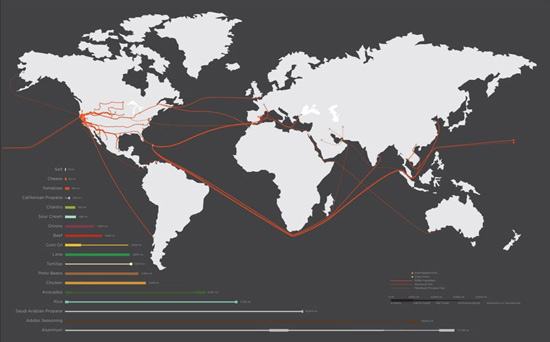 Green Truck Puts a Sustainable Spin on the Lunch Truck