The world's largest retailer offered to help Webb Stickney trim energy use at his manufacturing facilities two years ago.

Two lighting retrofits later, Stickney has seen a drop in electricity consumption and is recommending the program to other companies.

"You're out running your business, fighting the day-to-day battles, and you have someone of this quality saying maybe we can help you out," said Stickney, Lone Star Plastics' CEO. "It means a lot."

Three years before Walmart announced it would squeeze 20 million tons of greenhouse gas emissions from its supply chain, the retailer rolled out SEEP with the goal of helping its suppliers save electricity and money, in turn bringing down the price of products.

Since then, SEEP has completed roughly 20 projects, with another 40 or so companies in the pipeline, a figure that will likely swell in the wake of Walmart's newly announced climate goal and its well-publicized push to survey suppliers on their environmental impacts.

While many suppliers have never heard of SEEP, there's also another fact even fewer are aware of: You don't have to be a Walmart supplier to take advantage of the program.

"While this is called 'SEEP,' we have gone outside of our supply chain," said Katherine Jennrich, senior manager of Walmart Energy Services. "One of our most recent customers, they are not a Walmart supplier, but they did participate in the program. SEEP is sort of a misnomer."

Although Stickney has yet to crunch the numbers on the exact amount of electricity Lone Star Plastics is saving a year after completing the SEEP lighting retrofits, others boast impressive results. Von Drehle, a paper towel and tissue supplier, for example, saved $37,000 in one facility from a SEEP lighting retrofit. Another supplier, Dana's Undies of Georgia, saw its energy costs fall 71 percent.

The premise behind SEEP is simple -- share with its suppliers the expertise it has accumulated through making its own fleet of clubs and super stores more efficient, Jennrich explained. At the same, the program gives suppliers access to a slew of proven energy efficient technologies in the areas of lighting, HVAC, building envelope and building controls -- at the same prices Walmart pays.

"We wanted to leverage that knowledge and take it to our supply chain because we found that often times, our small- to med-sized manufacturing suppliers were being underserved by traditional energy services companies," Jennrich said.

"This is obviously a voluntary program," Jennrich said. "We are not going to waste anybody's time if there are not opportunities. If they are in a very efficient building, we move on. But if there are opportunities for lighting, HVAC or building envelope retrofit then we will discuss the financial hurdle rate."

The questionnaire and the financial hurdle rate -- the required return on their investment -- help to shape the energy audit.

"If they are looking only for projects that will only pay back within three years, well, then those are the projects we will suggest to them," Jennrich said.
Suppliers are expected to move forward with recommended projects that meet their financial hurdle rate, or else pay for the cost of the audit, which is performed by a third-party engineering firm.

"They helped us in our own stores and clubs," Jennrich said of the external engineers. "They're used to working in a Walmart way, which is a quick and efficient schedule, no disturbance of operations, and certainly the low cost that we expect. They also offer customized solutions. They are not selling their own products. They are selling whatever makes sense, whatever type of lighting works for that particular situation."

"It didn't disturb either plant," Stickney said. "It had a low impact on our operations, which was great."

Suppliers pay the third-party engineering firm for the retrofits, with a small margin built in for Walmart as facilitator of the program.

Lighting retrofits are the most prevalent SEEP project and tend to offer the fastest payback, followed by building controls, all of which played a role in helping Walmart trims its electricity consumption.

"We're not making suggestions about things we don't already know extremely well," Jennrich said. "That's the sort of the idea behind the program, that these are tried-and-true. We wouldn't expect our suppliers to utilize any technology that we wouldn't use ourselves." 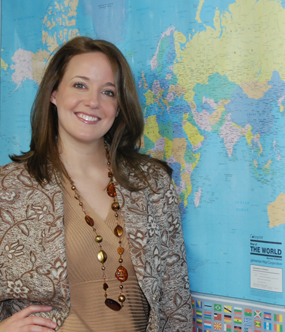 With the number of completed projects and companies in the SEEP pipeline hovering at around 60, Jennrich said she's working hard to bring the program to scale, but admits it's been tough because of the economic downturn.

"We were not investing ourselves, so it was hard for our small and medium suppliers to do so," said Jennrich (pictured right).

The slow economy and Walmart's perceived move toward consolidating its supplier base has created a cloud of uncertainty for some, leaving them hesitant to spend the time or money on SEEP, said Consultant Marc Major, who described SEEP as an "unequivocal good."

"Some see it as a big time investment, or perceive it as a lot of forms to fill out," Major said. "They're not seeing the big picture, which is my concern. They're not seeing this as being good for their business. Emotion is interfering with what would otherwise be a rational decision-making process."

Major makes his living helping Walmart suppliers understand and embrace sustainability in their operations. He recommends SEEP to every client, but only 10 to 20 percent are eligible because a significant portion of their operations reside outside the U.S. SEEP is only offered in the U.S.

Offering the program outside the U.S., particularly China, would significantly increase participation in SEEP, Major suggested. Many suppliers are also simply unaware of the program.

Walmart markets SEEP through its merchandising group, which works on the front lines with suppliers, but is also working to streamline outreach to suppliers in order to build capacity, Jennrich said.

The energy-saving opportunities outside the U.S. are also on the company's radar. Walmart announced a goal of improving energy efficiency of its top 200 Chinese suppliers by 20 percent by 2012; the program wasn't modeled after SEEP, said Spokesman Kory Lundberg, but is similar in content.

Aside from Walmart outreach, some companies are hearing about SEEP through word-of-mouth from former participants like Stickney.

"I think they're excited about it," Stickney said. "I think Walmart bringing it to the table gives them some comfort."

Two Lone Star Plastics facilities participated in SEEP, undergoing $160,000 in lighting retrofits that replaced 269 fixtures at its Garland, Texas, location, and another 200 in its Prattville, Ala., building (shown below).

The projects were estimated to save the company about $100,000 annually in electricity costs, with a 2.7 year ROI. Stickney believes the project had another obvious impact: his relations have improved with Walmart, with whom he's done business for more than 10 years.

"I think it has strengthened our relationship," Stickney said. "Different departments within Walmart are more aware of who we are. It's a concrete demonstration of our commitment to sustainability and sharing the sustainability goals of Walmart. It's not just talk."{related_content}

Another supplier, Kent Longley of Marck Recycling in Cassvile, Mo., is using what he learned through a SEEP lighting retrofit and applying the lessons in two additional locations, which will receive the same type of motion sensor lights that automatically shut off after detecting no movement for five minutes.

The SEEP lighting retrofit took place just after Marck Recycling moved into a new facility in Johnstown, N.Y., so Longley has no historical data on energy consumption at the site. Auditors estimated he would see a return on his $50,000 investment in 22 months.

The experience, however, opened his eyes to other potential energy savings technologies, such as a newly installed capacitor in one facility that will reduce energy spikes caused by turning on heavy equipment. His team didn't learn of the capacitor until a recent chance conversation with its local utility.

This illustrates what he considers to be the biggest challenge of energy efficiency projects: awareness.

"I think most people would get on board with a lot of this stuff," Longley said, "but they just don't know it's out there."

(GreenBiz.com publishes a resource for businesses seeking green and sustainability consultants. Be sure to check out our green consultants directory).