These are lean times for many businesses, and technological innovation, particularly of the green persuasion, will continue to receive greater scrutiny from investors, especially venture capitalists. Bio-inspired technologies, because of their novelty, will be examined even more closely.

Businesses must still seek competitive advantages, however, and innovation will still be a dominant strategy for getting ahead. I think it would be useful to examine the elements for successfully adopting a bio-inspired innovation. Below I have outlined a familiar success story, and some general lessons we can extract from it.

When professor Wilhelm Barthlott discovered for himself that certain plants had self-cleaning properties, he had no idea that the next 25 years of his life would be needed to bring a bio-inspired product to market. What he had found, at the Nees-Institute for Biodiversity in Bonn, Germany, in 1974, was that micro-roughness on the leaf surfaces of some plants was causing water droplets to bead up and collect dirt. In 1988, he identified the lotus as the paragon of this phenomenon, and later called it the Lotus Effect.

This mechanism is now well known and employed in several industries and products, the chief among them being self-cleaning paint. It is important for sustainability because it follows two natural principles that have appeared often in this column: surfing for free and using shape, rather than energy, to solve a problem. The micro-roughness is a passive device that takes advantage of the laws of space and physics to remove dirt. If your building is self-cleaning, you are not using your time, energy, and resources to do it, and our water and air stay cleaner.

Water is a so-called polar molecule, meaning that, like a battery, it has a positive end and a negative end. Opposites, as we know, attract, and therefore water sticks to itself (cohesion) and to other things, like leaf surfaces (adhesion). In the case of the lotus, water molecules are tiptoeing over the tops of the micro-bumps and maintaining their droplet shapes because there isn't enough surface area for the adhesive forces of the leaf to overcome the cohesion in the water. Similarly, dirt particles are riding on the tops of the bumps and are more attracted to the water than the leaf surface.

The first paint product to use this mechanism was launched by Ipso under the trade name Lotusan in 1999. World wide annual sales of products using the lotus effect are now over $100 million. Degussa, Ferro and Sto are some of the companies reaping the benefits of this invention. It is a success story indeed, but what are the main ingredients in the recipe for success for a bio-inspired product? Here are my thoughts:

First off, there is time. It usually takes a very long time to develop products based on biological discoveries, and one of the main reasons can be summed up in the word “translation.” How does one actually make something that was manufactured in a cellular environment using strings of amino acids for a completely different reason than yours? Most of our approximations of biological forms, processes and systems are crude, to say the least, limited as they are by our ignorance and the methods and materials available. 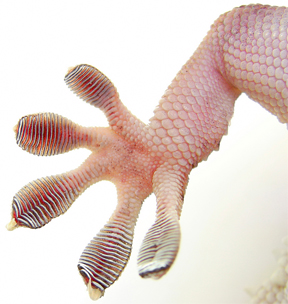 Scientists and engineers are used to limiting their problem statements to keep from being overwhelmed by complexity, but truly mimicking even a simple biological capacity remains difficult. Typically along this applied science path there is no single “aha” moment followed by champagne. There is a string of unfolding discoveries as new questions arise, and this takes time.

Professor Ron Fearing of U.C. Berkeley's Electrical Engineering and Computer Science department knows this well. He has been working on how to recreate the Gecko Effect discovered by Kellar Autumn and others in 2002. This was also a discovery that depended on understanding microscale and nanoscale structure and its relationship to the laws of physics. In the case of gecko adhesion, this molecular attraction is Van der Waals forces, rather than the polarity of water. When finally brought to market, a one-sided dry tape that will stick to anything and be removable, self-cleaning and reusable will be revolutionary, but its development for markets still needs more time.

Second, and allied with time, is persistence and commitment. Like the development of Velcro by Georges de Mestral, the application of the lotus effect is due largely to the unrelenting tenacity and cleverness of one man. During most of the 1990's, Barthlott struggled to interest the major German chemical companies in investing in the idea, and had to develop his own prototypes, brand name and demonstration strategies.

Truly individual successes are rare, however. The link between research, government and commercial interests, and the mutual commitment that it engenders, is critical to the success of most innovative ventures. This is true along the entire pathway from discovery to final product. In the case of the lotus effect, the development of the scanning electron microscope (SEM) was key to Barthlott's discovery. Private capital and technological capacity were essential to bringing any useful item to the public, and university exploration was necessary to form the revolutionary idea.

Third is the essence of the idea: Is the innovation powered by a universal phenomenon that can be scaled to many different applications? If it can, then likelihood of success seems to take a leap of magnitude: Velcro, lotus and gecko are all examples of structure innovations that take place at small scales, but can be applied at the macro scale in many ways. Friction, surface tension and Van der Waals forces are ubiquitous conditions that are not likely to go away soon.

Mastering a universal phenomenon seems to me to be the most important element for success in a bio-inspired innovation, even trumping the question of "Does it solve a problem?" A solution in search of a problem is not so bad as long as you can always count on it. You can also always count on new problems cropping up, and universality seems to ensure an application. In our examples, things in the world either stick to each other or they don't, and having a way to control that is very useful indeed.

To be sure, fitting such an innovation into a company's strategy requires a balanced view of costs and benefits, but we seem to be much more clever at creating applications than discovering universal phenomena. It may be worth considering it within your operational, financial and strategic framework, even if you are not sure if it will generate more value today than an alternate. Plastic cling wrap, after all, was a 1953 lab experiment gone wrong that trundled into the future to meet changing consumer habits, saturation marketing and petrochemical industrial growth, with commercial success.

Fourth is impact: What benefit does it provide and how? What seems to me unique about the times that we live in is directly related to this question of impact: Business considerations are now broader, and consequences are more severe. For example, many of our more progressive companies employ the triple bottom line of people, planet and profit, because the collective cost of not doing so has become so apparent. The plastic cling wrap noted above does not pass these new tests, primarily because of its disposable, yet chemically persistent, nature. But what if the material was self-cleaning and reusable and based on degradable polymers instead of PVC?

These wider considerations and deeper consequences will continue to drive innovation. One of the best potential bio-inspired success stories is the Calera Corporation of which I wrote in a previous article. Problems are profit opportunities to innovative leaders, and Calera has developed a scheme to turn harmful CO2 from smokestacks into calcium carbonate for the production of cement. Because of the fundamental solution of chemically turning a waste product into a resource, the project has the potential of providing three different revenue streams, all within one operation: carbon credits or environmental remediation, cement products, and pretreated seawater for desalinization.

Bio-inspired design, while innovative, is not necessarily sustainable. It is, however, a fresh and powerful path to innovation for companies intent on meeting the new sustainability standards that our world needs and that companies can benefit from. Companies that can balance careful analysis with broad-minded vision may find themselves looking to nature more and more for their solutions. The lessons from the lotus may help.

Tapping into Nature: Materials that matter

Beyond Metaphor: Biomimicry and the Case of the Gecko