Water is a topic that is here to stay, as our water coverage throughout the week has shown.

With increased concern about water scarcity, especially as the climate continues to heat up, companies and governments alike are putting new scrutiny on wringing out every possible inefficiency from their operations.

There are plenty of tried-and-true methods for companies looking to make immediate reductions in water use, and many of the industries most at risk from water shortages or restrictions have found a number of ways to address water issues.

In order to make a step-change in both the depth and the breadth of water efficiency -- that is, saving more water as well as getting more companies and industries to take conservation to heart -- new practices and innovations are going to have to take root.

That is where clean technology comes in. As Joel Makower reported this week, clean energy is on the rise, despite a lack of traditional incentives like climate legislation, high oil prices or a booming economy.

But the ever-widening spotlight on cleantech has to date been almost entirely focused on alternative energy sources like solar, wind and geothermal. Technologies like the mysterious and much-hyped "Bloom Boxes" for fuel-cell energy get the lion's share of the spotlight and funding, while other areas are hung out to dry.

This is beginning to change, as evidenced by a recent prize competition aimed at water-saving tech startups. The ImagineH2O prizes handed out earlier this month, gave a total of $70,000 to three companies that are laying the groundwork for breakthroughs in water efficiency.

And the potential for savings is huge. Scott Bryan, the director of operations at ImagineH2O, explained during the awards ceremony for this year's prizes that, "In some parts of the country, you can save more energy by turning off the tap than turning off the lights."

The winners of the prizes highlight just how wide the playing field is for applications of water-centric cleantech.

The winner of the grand prize, Fruition Sciences is focused on the agricultural space, specifically vineyards. The company has developed a technology that precisely measures the amount of water a grapevine is currently using, and lets vintners know when they should water -- and when they should stop. 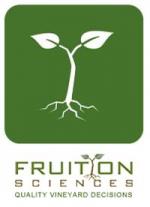 Wine grapes produce better fruit when they're "thirsty," Thibaut Scholasch, the co-founder and Vice President of Research and Development at Fruition, told me at the Imagine H2O awards ceremony. But winegrowers have little idea how much is too much, which makes it easy to waste enormous amounts of water in the fields.

"People aren't even aware there is a problem," Scholash said. The company is entering its third year of operations, and with their technology installed in 13 vineyards in California's legendary Wine Country, Fruition has seen impressive results.

The technology has enabled winegrowers to save 24,000 cubic meters of water on a 30-acre vineyard -- that's 150 swimming pools' worth of water, Scholash said. And to top it all off, that water savings also leads to better wines.

Fruition is focused on top-shelf wineries while they're getting up to speed, but as the results begin to bear fruit, Scholash said Fruition plans to expand to wineries the world over. 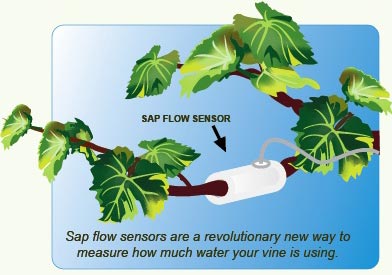 The jump from first to second place in the Imagine H2O awards is also a jump from end-use to collecting what falls around us every day.

Rainwater HOG is a set of modular rainwater storage tanks that can be installed in any location, from homes to fields to factories, and is designed to store the most water in the least amount of space.

The food-grade containers have been put to use in Australia (where the founders hail from), the U.K. and the U.S., and were named one of the Top 10 Green Building Products in 2008 by BuildingGreen.com.

In one installation in Queensland, Australia, the Nundah School installed 114 HOGs to store 5,700 gallons of rainfall for use on school grounds and inside the facilities.

With the prize money, Rainwater HOG's founders, Simon and Sally Dominguez, plan to help bring the next generation tool to market. The HOGzilla is a much larger storage tank, and one that can serve as a retaining wall when used in the vertical position. 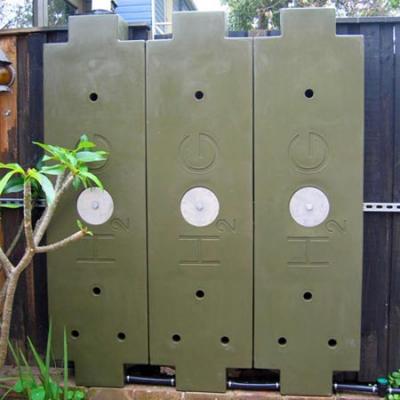 The third winner of this year's ImagineH2O prize splits the difference between the other winners. Between falling from the sky and returning to the earth, WaterSmart Software has developed a tool to help utilities manage water resources as they're delivered to customers.

The company is nascent in every sense of the word; prior to the ImagineH2O competition, founders Peter Yolles and Rob Steiner hadn't even actually created a business yet.

But the technology is there, and WaterSmart's demand-response for water utilities believes that it can drive behavior change through homeowner and business education projects. The company predicts average savings in the home of 3,000 gallons per year, with some homeowners cutting their water use by 20 percent (5,600 gallons per year, according to estimates by the American Water Works Association).

The Future of Water Cleantech

{related_content}Despite such wide-ranging and potentially high-impact winners, the ImagineH2O prizes still have room to grow, and the market for water technologies alongside them. Director of operations Scott Bryan explained that although some applicants like WaterSmart were fledgling -- or nonexistent -- firms, others were new companies created by experienced entrepreneurs that see the potential in the water-efficiency market.

"The companies that applied were the ones that were able to find a brand new organization and a brand new prize," Bryan said. "It says something about all of them, that they weren't just sitting back, but are actively looking to create this market."

ImagineH2O is in the process of developing its next prize competition. Similar to the broad nature of the "water efficiency" prizes just handed out, Bryan said another promising realm is the "water-energy nexus," where companies like desalination firm Quantaic, which was also a finalist in this year's awards, are making big strides in the effectiveness of the technology.

"As a prize competition, we need to pick a topic that inspires and pushes competition in the sector," Bryan said.

ImagineH2O will be announcing its next prize competition soon; you can learn more at ImagineH2O.org.

$100K for Winning Startup that Cracks the 'Water-Energy Nexus'