Everyone everywhere seems to be talking about cloud computing. Apparently 2010 is even being called the "year of the cloud."

We've talked about the green benefits of cloud computing before, of course -- both in the context of last year's Gartner Hype Cycle discussion of cloud's importance and how cloud computing can be an important emissions-reduction strategy.

But according to a report released today by Greenpeace, all this discussion of cloud computing misses the mark, especially when you're talking about green IT.

The new report, "Make IT Green: Cloud Computing and its Contribution to Climate Change," updates and extends some of the research published in 2008 in the Smart 2020 report on how IT contributes to climate change, and finds that the Year of the Cloud is only going to make things worse.

"We are broadcasting the fact that the IT industry has a carbon problem," explained Greenpeace press officer Daniel Kessler in an interview about the report. "And they can't change it without changing it in [Washington] D.C."

What Kessler means is that, despite an increasing focus on power usage effectiveness (PUE), the measurement of choice for determining how efficient a data center actually is, and despite efforts to constantly make computing facilities more efficient, it's never going to make enough of a dent in greenhouse gas emissions without work on the policy front.

According to Greenpeace's research, data centers and telecommunications networks -- which together are the two key components of cloud computing -- are going to triple their overall consumption of energy by 2020, all because of the rise of cloud computing.

By making data access omnipresent, whether through your smartphone, your iPad, your netbook, or however you get online, the IT industry is ramping up demand for data storage and processing, which means ever more and ever larger data centers.

In addition to shooting for low PUEs -- companies like Google and Microsoft are hitting PUEs of 1.1, and one data center designer achieved a PUE of 1.05 using currently available technology -- some companies are also looking to build their data centers in places to maximize energy efficiency and harness renewable or clean energy.

Hewlett-Packard, to use the most recent example, just raised the curtain on its wind-cooled data center in Wynyard, England, and last year the Green Grid offered a number of tools to help companies find the best spots for free data center cooling.

But that is still a tiny slice of the pie of both new and existing data centers, and the ones that are not using renewable energy or free cooling, are the biggest part of the problem.

"It's great that [data center owners] are being energy efficient; it's not great that they're driving up [energy] demand -- and it's not a small demand, it's a huge demand," Kessler said. "We also want to warn that their growth is depending on the coal industry," he added, referencing the recent dust-up between Greenpeace and Facebook.

(In a nutshell: Facebook in January announced plans for a new, green data center with a PUE of 1.15. Greenpeace slammed Facebook for signing a contract with a coal- and nuclear-powered energy utility. The Internet finds that Greenpeace itself uses some dirty energy for its computing power. No one wins.)

But the Facebook v. Greenpeace saga highlights how companies need an additional incentive to make new and even existing data centers ever greener. In the report, Greenpeace lays out how dirty some of the biggest IT companies' biggest data centers are. The results, shown below, are not good: 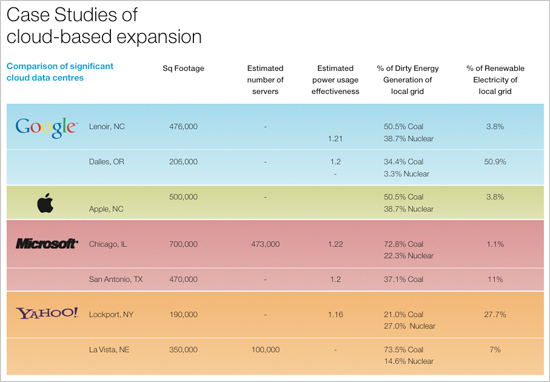 Google's Dalles, Ore., facility does the best job, with 50.9 percent renewable (hydroelectric) power. But that's countered by its Lenoir, N.C., facility that draws nearly 90 percent of its power from coal and nuclear.

What it comes down to is the need for companies to build renewables into the priority list for siting new data centers, while at the same time pushing for policy changes at the federal and state levels.

Kessler said that, while IT companies should also be advocating for a comprehensive energy and climate bill from Congress and the White House, they should at the same time be building new data centers in states that require cleaner energy mixes for their grid, and push legislatures in the states where their existing data centers are housed to add more renewables to the grid.

Greenpeace's green cloud report is the latest step in its Cool IT campaign, a campaign launched in 2009 in the run-up to the Copenhagen climate summit. You can download the full report from GreenBiz.com, and more details about Cool IT are at greenpeace.org/coolit.

Simple steps to a greener cloud