Inside the World's Greenest Data Center

Inside the World's Greenest Data Center

We've reported on the facility before, both when it was first announced and when it opened this year. But I spoke today with Ed Kettler, a Fellow and Green IT Strategist at HP Enterprise Services, to get some further insight into the project.

Kettler talked about the challenge of turning a former shipping distribution center into a high-powered, highly efficient computing facility.

"We were approaching it as a way of building a standard box, like we used to do," Kettler said. "But with rising energy costs, we got together and organized a design team to determine the problem we were trying to solve and find out if there's a more efficient way to do this."

{related_content}What they came up with is a holistically reworked facility that brings IT and construction innovations to bear on reducing overall energy use, cutting costs wherever possible as a result, and conserving and reusing resources at the same time.

"What can we do differently?" Kettler asked. "First, we can take advantage of Mother Nature instead of trying to fight or reinvent her."

The most widely reported featured of this facility is its use of free cold air from the nearby North Sea to provide as much as 97 percent of the chilling. Although HP did need to install traditional chillers for auxiliary support on the fewer than 10 days a year that the mercury climbs high enough outside to warrant additional support.

The Wynyard facility has a series of air handlers that condition the air to the right temperature and humidity, and then a number of low-rpm fans blow the air through the 12-foot-high raised floor to distribute it throughout the computing space. 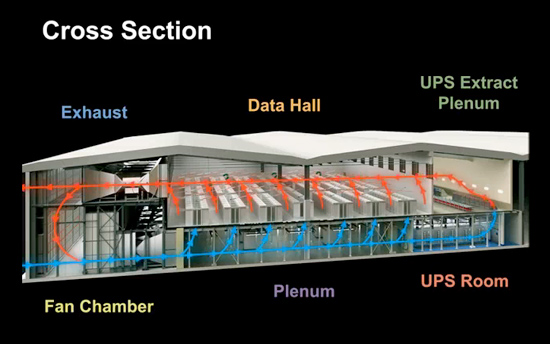 The result is what Kettler calls "probably in the top 1 or 2 most efficient data centers in the world" for its size -- especially considering that it's a general-purpose facility that houses different vendors' hardware, different applications and a wide range of business models, as composed to Google or Yahoo single-function data centers with custom-built, highly efficient servers.

Beyond the hardware, the facility itself was designed to maximize efficiency. HP decided to use light-colored server racks (pictured below) to reduce the amount of lighting needed, and the lighting itself is highly reflective and laid out in a way to minimize shadows.

Outside the building, HP installed a more reflective roof that lowers the heat load of the building on sunny days and collects rainwater for use in the toilets and on the landscaping of the facility. The design crew also took out much of the cement from the old shipping warehouse and replaced it with grass and native plants and trees.

"It kind of snowballed," Kettler said about how the building became so fundamentally green. "In actuality, we didn't build the building, we recycled a warehouse."

HP's design team, including members of its Enterprise Services division as well as outside partners including the Rocky Mountain Institute's Amory Lovins, started by looking at the overall footprint of the building and trying to find a different way of doing things than how they'd always been done before. 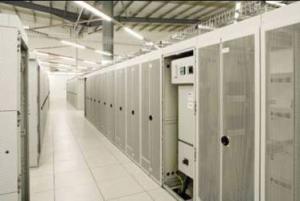 But despite all eyes on making as green a data center as possible, Kettler said the goal was always to meet HP's "Eco 2.0" goal: Ecological sustainability and economic viability.

"Part of the challenge was to find the right balance to keep the bill costs reasonable, and keep long term life cycle costs down, but have an efficient and good ecologic footprint."

Although Kettler wouldn't disclose the anticipated ROI on the data center, the redesign makes good business and environmental sense. HP expects the Wynyard data center to use 40 percent less energy than a more traditional data center, and Wynyard even beat HP's own expectations for efficiency: Although the company anticipated a PUE of around 1.7, it has tested at 1.2, and consistently operates at an even more efficient 1.16.

Some additional details about the Wynyard data center are online at HP.com, and click the image below to watch a short video of how the data center operates. 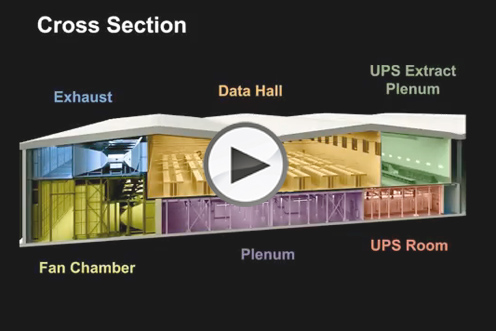 HP's New Data Center First to Use Wind for Cooling