[Editor’s note: This is Part 3 of a four-part series offering a vision for green chemistry in the United States in 2030. Part 1 defined the vision and Part 2 laid out a broad game plan for change. Today’s post focuses on building blocks for the 2030 green chemistry vision: changes in regulatory policy and examples of past achievements from green chemistry investments.]

Federal regulatory policies need to be strengthened to better drive green chemistry. Just as targeted phase-outs of individual chemicals such as brominated flame retardants and bisphenol-A have hastened the use of replacement materials, broad federal chemical policy reform is necessary to speed chemical transition on a wider scale. Europe’s REACH chemical management program and the creation of priority chemical lists for action in various U.S. states are harbingers of the changes to which chemical manufacturers and their downstream customers will need to adapt.

{related_content}The University of California at Berkeley’s Michael Wilson and Megan Schwarzman have characterized the existing federal toxic chemicals law, the Toxic Substances Control Act (TSCA), as suffering from a data gap (insufficient disclosure of hazards), a safety gap (insufficient tools for government to act against hazardous chemicals), and a technology gap (marginal investment in green chemistry research, development and education).

Both environmental health advocates and industry groups agree that reforming TSCA is in order, but environmental health advocates want to build on regulatory changes in Europe and elsewhere that speed up the transition to safer chemicals, while the chemical industry appears to favor a more protracted approach that will slow the process. Closing the data gap can be especially important in helping green chemical manufacturers differentiate their products in the market place.

Downstream corporate users of chemicals will be well-served by adding their voice to health advocates’ calls for more rapid government regulation to phase out dangerous chemicals. Downstream corporate users’ core business interests are better aligned with their customers downstream than with the upstream manufacturers of the toxic chemicals in their products. Their public positions on chemical policy reform should similarly align, as discussed here. 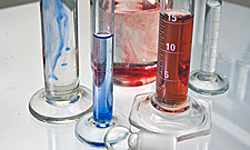 Although the existing federal chemical regulatory framework has not itself been a significant driver of green chemistry, the voluntary Presidential Green Chemistry Challenge launched by EPA in 1995 has provided high level recognition of major green chemistry accomplishments.

For example, the 2003 award for designing safer chemicals was given to Shaw Industries Inc. of Dalton, Ga., one of the largest floor-covering manufacturers in the United States. Shaw won the award for the development of EcoWorx carpet tile. EcoWorx replaces carpets backed with the controversial chemical polyvinyl chloride (PVC).


Shaw was able to produce carpet that not only was recyclable but also maintained the properties of virgin material throughout the recycling process at a reduced cost. Costs were further reduced by savings in manufacturing and transportation expenses as a result of the 40 percent reduction in carpet weight. The product was so successful that it completely replaced Shaw’s PVC-based product.

Pfizer has been another green chemistry award winner. It won the 2002 prize for alternative synthetic pathways. Pfizer redesigned its process for manufacturing the antidepressant Zoloft. It eliminated the need to use four toxic solvents when synthesizing the drug, along with 830 metric tons annually of other waste chemicals.

Other advances of especially great interest are those which specifically replace toxic chemicals of high concern. These innovations include, for example:

•    Columbia Forest Products’ PureBond formaldehyde-free plywood, which uses a soy-based adhesive, is inspired by company-funded biomimicry research, and is a winner of an EPA green chemistry award
•    A 75 percent bio-based fire retardant plastic created by NEC that can replace plastics relying on toxic brominated flame retardants.
•    Air Products' Tomadol line of surfactants based on palm or coconut oil that are an alternative to nonylphenol ethoxylates (NPEs).

Also of interest is a biodegradable plastic made from corn-based starch, produced by a DuPont partnership with Plantic Technologies, whose first commercial consumer application is for packaging BPA-free baby bottles. Still other bio-based chemicals, sourced from wheat, algae, sugar, and other natural materials, are useful for producing adhesives, foams, coatings, ink, automotive parts, electronics, sports equipment, and lubricants.

To the extent that green chemistry calls for relying more heavily on renewable, bio-based materials, the field has been given a boost by federal efforts to encourage development of bio-based materials. The U.S. Department of Energy’s Biomass Program notes that "biomass is a clean, renewable energy source that can help to significantly diversify transportation fuels in the United States." In January 2010 alone, DOE announced an $80 million investment for advanced biofuels research.

DOE’s biomass program issued a report in 2004 identifying 12 potentially useful sugar-based chemical building blocks for developing biomass as a feedstock for commodity chemicals. The report indicated that considerable additional research would be needed, and these chemicals have become the focus of start-up companies funded by venture capitalists as well as more established chemical companies.

Updates on many of these companies and their products are offered regularly by the ICIS Chemical Business “Green Blogger”  in a free, searchable blog. For example, 19 enterprises are listed in “Green Chem Startups to Watch,” and “26 New Soy Chemicals in 2009” lists new soy chemicals reported by the United Soybean Board.

Chemicals are not necessarily green even if they’re bio-based. If a soy product is sourced from a plantation carved out of the Amazon rain forest, or palm oil is sourced from dwindling Asian rain forests, this can create reputational and supply chain problems for companies sourcing such products, as Unilever and Cargill have learned.

Similarly, if the processing of a bio-based material involves use or release of toxic chemicals, such as the conversion of bamboo into fabric, this can cause a company making “environmentally friendly” representations to run afoul of the U.S. Federal Trade Commission for making false product claims.

Furthermore, if bio-based materials are developed with genetically modified organisms, these techniques may raise concern. Guidelines for sustainable bioplastics, developed by nonprofit organizations working together as the Sustainable Biomaterials Collaborative, signal the kinds of considerations that enter into determining whether bio-based materials truly represent a contribution to green chemistry. The guidelines are being implemented by Whole Foods Market and have been used as the sustainability framework for the Maine potato project mentioned in Part 2 of this series.

Tomorrow, Part 4 looks at models for scaling up green chemistry.

Richard A. Liroff, Ph.D., is founder and director of the Investor Environmental Health Network (IEHN). IEHN is a collaboration of investment managers that advocates for safer corporate chemicals policies to grow long-term shareholder value and reduce financial and reputational risks to companies. The business case for corporate safer chemicals policies, a list of shareholder resolutions on safer chemicals policies, and a roster of participants can be found on the IEHN website, www.iehn.org. The author is engaged with numerous organizations and processes discussed above; mention of commercial products and services should not be construed as endorsement. This article has benefited from comments provided by colleagues working on toxicity reduction. Portions are reprinted with permission from the author’s Green Chemistry article in Berkshire Publishing Group’s Encyclopedia of Sustainability.

Bio-based chemicals: When green is toxic

A Formula for Building a Green Chemistry Future

Knocking Out Toxics: Why Companies Are Being Pressed to Use Safer Chemicals

Models for Scaling Up Green Chemistry