Beyond the Blue Bin: The Next Generation of Recycling

Beyond the Blue Bin: The Next Generation of Recycling

If you live in a state with a bottle deposit law, you may have encountered Reverse Vending Machines (RVMs) at supermarkets or recycling centers. For consumers, RVMs provide a simple, clean and convenient way to recycle used beverage containers. For retailers and recycling centers, RVMs provide a streamlined platform to automate the collection, sorting and compacting of recyclables.

As public sentiment continues to shift in favor of businesses with strong sustainability initiatives, consumers are beginning to look for better recycling options beyond the traditional supermarket and recycling center venues. Facilities managers in universities, entertainment arenas, public parks, and hospitals are beginning to seek out new options for automated recycling programs.

Blue recycling bins are a fixture in many institutions and public spaces. However, these blue bins lack the interactive element and ability to provide incentives that RVMs have; members of the public often automatically pass them by or throw non-recyclable trash in them. Many organizations are realizing that to take their recycling programs to a new level, automated recycling machines can be an effective way to not only incentivize people to recycle, but also show that the organization or facility is serious about reducing litter and stress on landfills.

The introduction of RVMs in institutions and public spaces is showing that automation can improve the rate of recycling in busy facilities. With the right kind of arrangements in place, RVMs can even forge a valuable link between business and the public, providing innovative ways for the machines to help pay for themselves.

Cleaning Up on Campus

Last year, Sacred Heart University in Connecticut was looking for ways to eliminate litter, reduce its trash volume, and cut the university's waste hauling expenses. To address these challenges, the university installed RVMs to capture the thousands of used bottles thrown away on campus each month from the regular trash.
{related_content}
To help finance these RVMs, the university tied its recycling initiative with sponsorships provided by consumer product companies. Students and faculty who returned their empty plastic and aluminum beverage containers to the RVMs on campus received coupons to redeem goods from key sponsors, including BIC (stationery products and shavers), FUJIFILM (digital cameras), as well as items from the university's food service provider.

"Our previous recycling program -- utilizing simple blue recycle bins around campus -- though effective in encouraging students, faculty and visitors to recycle, was not enough to get the job done, so we were looking for a more interactive solution," says Floyd Young, Director of Facilities/Campus Operations at Sacred Heart University. The RVMs can accept up to 20 containers per minute and have a total capacity of 500 containers per machine, depending on the material.

At Fairfield University, also in Connecticut, a similar program offers students the opportunity to recycle bottles using an RVM, and then get an automatic receipt for their deposit credit on their university "Stag" card, which can be used to pay for food, books, laundry and other campus expenses.

The Dunkin' Donuts Center, a SMG managed facility in Providence, R.I. that hosts sporting events, major concerts and other large entertainment attractions, is using RVMs as the centerpiece of a program to improve recycling in the facility. The RVMs are installed in the facility's food courts, providing the public with a clean, easy way to dispose of their glass, plastic and aluminum beverage containers responsibly.

The new recycling initiative is largely driven by pressure from entertainers who appear at the center. "Many of today's top performers are insisting that venues have sustainability and recycling programs, and are only willing to appear at arenas that make a serious effort to provide event-goers with high-quality recycling," says Larry Lepore of the Dunkin' Donuts Center. He adds: "The RVMs will also save the facility $1400 in trash haulage costs monthly."

The center is using the RVMs to interact directly with their patrons, offering prizes to build greater incentives to recycle. Every 100th recycler wins complementary tickets to upcoming events and many other prizes.

RVMs are also being used in national parks and other public spaces, to reduce litter and promote environmentally responsibility among patrons and in the community.

At Forever Resorts' Grand Canyon Lodge-North Rim in Grand Canyon National Park, the lodge has an RVM installed on the rim of the canyon at the General Store and Campground area. They have established their own deposit system for beverage containers: Its shop sells drinks with a high deposit, to encourage patrons to bring the bottles back for recycling and cash redemption. 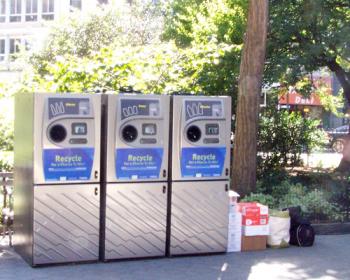 In another example of RVMs used in public spaces to reduce litter, machines were temporarily installed at Madison Square Park in New York City for a daytime concert series. The RVMs, provided by TOMRA, in partnership with the Glass Packaging Institute (GPI) and VOSS Water, allowed park visitors to dispose of their glass, aluminum, and plastic beverage containers in RVMs, with a chance to win prizes.

Prizes included iPod Shuffles and t-shirts. All deposit refund monies collected were donated to the Madison Square Park Conservancy, a non-profit organization that supports the park.

Hospitals Make Use of RVMs 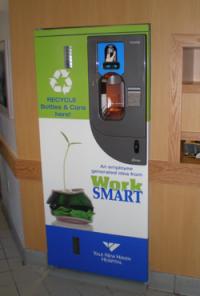 Linking Business with their Communities

Interest in using automated recycling machines at various public facilities is growing, in great part due to the fact that the machines are capable of hosting innovative programs, promotions and fundraisers that incentivize people to recycle. Today's RVMs are easy to install and maintain; some models have no special electrical requirements to run, so they're an easy addition to any number of venues.

As organizations and institutions seek to respond to public demands for more environmentally friendly facilities, automated recycling machines have a key role to play in linking business with the people in their communities, as they work together for a greener future.

Warren Stoll is Vice President of Marketing and Business Development at TOMRA, which provides solutions that improve the economics and convenience of beverage container recycling.