Baseball teams including the San Francisco Giants, Seattle Mariners, Oakland Athletics, Philadelphia Phillies, Pittsburgh Pirates and New York Yankees have all implemented eco initiatives, and the Cleveland Indians has long been one of the leaders of that list.

"We [The Indians] have a wide breadth of activity and efforts in greening and sustainability," said Brad Mohr, Assistant Director of Ballpark Operations for the Cleveland Indians and the team's home ballpark, Progressive Field. "We have a comprehensive recycling program. We are the first American League club to install solar power. And, we are trying to add a new green feature each year."

The team's marketing message, "Our Tribe is Green ... Are you IN the Tribe" is meant to encourage fans and the surrounding community to participate in green activities. The ball club wants to couple action with the message, so the Indians' Green Team practices several major green activities at Progressive Field, including a recycling program that has been in place since the park's opening in 1994 and the installation of 42 GE solar panels.

In 2006, the Indians installed solar panels in the upper deck. "Taking our eco program to the next level we decided to look at an alternative energy project," said Mohr. "That project turned out to be our solar pavilion."

With the help of Green Energy Ohio, the Cleveland Foundation, the Ohio Department of Development, and Doty & Miller Architects, the solar project continues to be an electricity producer and has been doing so since 2007, and produces 30,000 kilowatt-hours a year, enough electricity to power 400 television sets throughout the ball park. 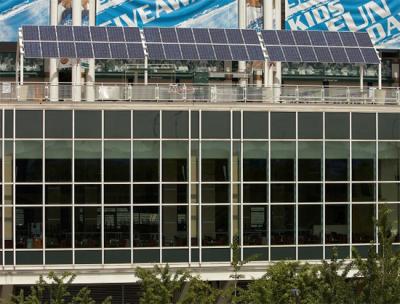 In addition to generating power, according to Mohr, the solar panels project is a way to educate fans and inspire investment into a big new industry and bring jobs to Ohio. The team has also installed LED lighting for all of the Progressive Field signs as an energy efficiency measure.

But the largest cost-saving eco initiative is far and away the recycling program at Progressive Field. There are recycle bins in every office, cubicle, front office, game day areas, and the home and visiting team club houses. The team recycled over 153 tons of materials in 2009, reducing trash pickup over 60 percent -- from 254 trash pickups in 2007 to 97 pickups in 2009. Recycled items include cardboard, paper, #1 plastics, cooking oil, batteries, electronics, fluorescent bulbs, organic waste and wood.

Yet another way the club continues in reducing trash hauls, it invested $30,000 in balers to make cardboard or plastic into giant cubes. Selling the recycled cubes along with the money savings from reduced trash hauls paid off the initial investment within four months.

"Part of our green plan is to show the community how a small investment can make a huge difference and how making that investment is doing the right thing for the environment," said Mohr.

Other eco activities include using Green Seal certified paper towels, toilet tissue, facial tissue, and cleaning products in the ballpark and front office. The retail Indians Team shops are using biodegradable bags for customer purchases. Plus, the organization donates 18 thousand pounds of food or 14,300 meals to those in need.

{related_content}What's next? Composting is on the horizon. Currently, cornstarch based beer and soda cups, cutlery, and hot serve cups are used throughout the ball park, in the front office and in the press box. The plan is to start composting those items along with others.

"We will be composting everything that breaks down such as grass, dirt scrapings from the field, foods that are unsuitable to donate, disposal cups made of corn starch will also go into the compost," said Mohr.

Mohr is a member of the major league baseball stadium operators greening committee which has been working with the NRDC to learn new facets and new ways to green ballparks and communities. The committee is developing a tool that can be used to measure results and build best practices.

The Indians club considers the organization a leader in green. Other major league ballparks, stadiums and other types of facilities such as a recent public assembly facility visit Cleveland's ballpark to see what they are doing with the recycling program and post-game cleanup.

Players also promote the efforts. "There is almost a shame culture in the club houses. If a player throws a plastic bottle in the trash can, we have seen another player fish the bottle out of the trash bin and ask the player to put it in one of the recycle bins," said Mohr.

Education is a big part of the green efforts as well. On April 17, the first Greening Awareness Day was held at Progressive Field. It was a way for the Indians team to say thank you to all of the organizations that help with their green initiatives. Organizations such as the Cuyahoga County Waste District, Green Energy Ohio, and the Cleveland Zoo setup tables for fans so that they could see what they are doing for green as well as how they are helping the Indians go green.

"Green is part of our culture and our business plan. We will be looking at another alternative energy project such as a wind turbine, geothermal or solar thermal as one of our future projects in the very near future," Mohr said.

The Cleveland Indians organization continues its green education mission by offering greening up tips and techniques for home and business at its web site, www.indians.com/green.

Patricia Faulhaber has written hundreds of articles for education, business and technology for trade, consumer, and regional magazines and newspapers. Her articles have appeared on a regular basis in nationally distributed magazines such as the Writers' Journal and in several Ohio based newspapers and publications such as Focus, Antique Collector, Wooster Weekly Journal and Graphic Publications' weekly newspapers. She is also a feature writer for Suite101.com, an online news and article website.

The greening of the summer game

The Twins' Target Field Scores as a Green Building All-Star