This summer, 51 Climate Corps fellows will take their places on the front lines of a new movement for energy efficiency in business -- a movement grounded in smart economics and fueled by the talents of the next generation of business leaders.

It’s a movement whose time has come. Climate change is the environmental challenge of our generation, and the need for action has never been greater. The catastrophic oil spill in the Gulf of Mexico has focused the nation on the need to confront our reliance on fossil fuels. And that has renewed hope for swift action in the Senate on a climate bill.

But there’s one solution to the climate crisis that we don’t need to wait for -- energy efficiency.

The opportunity is enormous: A 2009 McKinsey report estimates that by 2020, the United States could reduce its annual energy consumption by 23 percent through energy efficiency measures alone.

This would cut greenhouse gas emissions by over a gigaton -- that’s a billion tons -- and cumulatively save companies and consumers over a trillion dollars.

Energy efficiency is doable right now, it’s cost-effective, and it’s absolutely critical to slowing climate change. But it’s not happening fast enough. To truly take energy efficiency to scale, we need a national movement that captures the imagination of people from dorm rooms to boardrooms across the country.

That’s why Environmental Defense Fund created EDF Climate Corps. The heart of the program is the EDF Climate Corps fellow. With our partner Net Impact, we recruit students from top-tier MBA programs, provide them with intensive training and embed them in companies around the country. 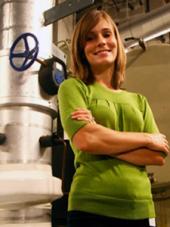 For 10 to 12 weeks, the fellows serve as champions of energy efficiency, developing customized investment plans that help their companies cut costs and greenhouse gas emissions.

In the first two years of the program, Climate Corps fellows identified almost $90 million in net operating cost savings, and 280 million kilowatt hours of energy savings -- enough to power 24,000 homes annually.  Even more impressive: Companies report that they are implementing projects accounting for 84 percent of the energy savings identified by the fellows.

With results like these, it’s no wonder that the program has grown by leaps and bounds, from seven fellows in 2008 to 51 fellows this summer.

We have 47 companies on board this year, across industries from telecommunications (AT&T and Verizon), to IT (Cisco and Sungard), e-commerce (eBay and Yahoo!), retail (Target and JCPenney) and financial services (Bank of America and Wells Fargo).  Several companies are returning to Climate Corps for a second year -- Cisco for a third.

The beauty of EDF Climate Corps is that it gives tomorrow’s business leaders a chance to change the world today. That’s what attracted Jeremy Dommu, a 2010 fellow from George Washington University, to the program. As Jeremy writes in a blog for Business Week, “I look forward to a summer in which I am tasked with making suggestions that will have a positive impact on both the planet and a company's bottom line.”

So to Jeremy, and to our other 50 champions of energy efficiency: Welcome to Climate Corps!

Victoria Mills is managing director of Environmental Defense Fund's Corporate Partnerships Program. This content is cross-posted on EDF's Innovation Exchange blog and is reprinted with permission. More information about the Climate Corps is available at edf.org/climatecorps.

Images of past Climate Corps fellows courtesy of EDF.

The State of Green Business -- and Building Efficiency

IT Aims to Save the World: The State of Green Business 2010