Only a fraction of U.S. electricity is supplied via solar -- .02 percent in 2009, according to the Energy Information Administration.

The U.S. Department of Energy has a goal of generating 10 percent to 15 percent of the nation's energy from solar sources by 2030, and recently announced nearly $170 million in new funding to ramp up the industry.

Yet, when compared to carbon-intensive electricity sources such as coal, which supplies 45 percent of U.S. electricity, a significant role for solar photovoltaic technology in the energy mix may have a difficult road ahead.

"We're faced with an unprecedented challenge in the solar world," said Doug Payne, executive director of SolarTech. "Industry players -- both private and public stakeholders -- have not yet come together to build the end-to-end business systems so crucial to ensuring that the industry has the capacity to deliver on what could be booming customer demand. As a result, we could be setting ourselves up for a host of problems." 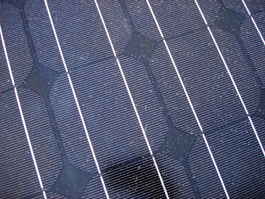 Striving to break the barriers, SolarTech is familiar with the challenge. The group is focused on removing hidden and soft costs by streamlining processes, and is using industry collaboration as a way to "make solar happen," Payne said.

"Administrative costs and hidden delays are causing approximately 5 percent to 7 percent lost profitability for every project," Payne said. "This is fundamentally the difference between sustainably growing an industry and one that is struggling to scale."

Rocky Mountain Institute believes that PV needs to supply a significant percent of U.S. electricity, but there are several challenges blocking the way to long-term viability.

In spite of a 33 percent dip in solar panel prices in 2009, the installed cost of solar PV remains too high to be competitive with other sources of electricity without subsidies.

"There are a number of barriers that need to be addressed with solar PV," said Lionel Bony, a director at RMI. "Cost-effectiveness is probably the most important one if solar is to become a large-scale supplier of U.S. electricity." 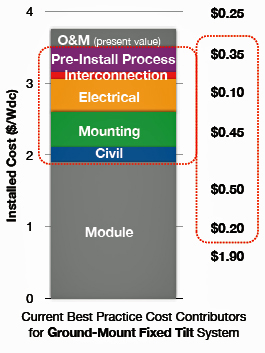 Solar PV system costs are roughly equally split between the module and the "Balance of System (BoS)," which is defined as "everything but the module itself" -- including structural and electrical components, labor, financing, permitting and other soft costs.

Although module prices continue to drop, BoS costs are on a less aggressive trajectory.

"Right now, there is a great opportunity to tackle BoS costs as they are seen as an increasingly significant barrier to affordable PV," Bony said. "Although there is a lot of innovation on BoS, it may not be spreading as fast and as far as what is happening on the module side. On the whole, we believe that the BoS industry can become more efficient and cost-effective."

To address this issue, RMI and partners Delta/DelSolar, the DOE, Rio Tinto, National Postcode Lottery, and Fred and Alice Stanback are hosting a design charrette June 22-24 in San Jose, Calif., to rethink and re-design the installation processes for large-scale commercial/utility rooftop and ground-mounted PV systems.

Bring the Right People at the Table

The BoS value chain is complex and includes a large number of stakeholders, such as component manufacturers, installers, customers, regulators and utilities.

"Given this complexity," Bony said, "there is probably great value in bringing together representatives from across the value chain to work together in a way that can stimulate 'coopetition.' "

And, Bony said, while many of the participants may be rivals in the marketplace, they are "willing to come together because they see value in making this entire process more efficient."

Innovate on a Large Scale

For three days at the charrette, participants will review what currently works and what doesn't, and will focus on developing new and more efficient approaches to system architecture, component design and process flow.

To help make that vision tangible, RMI is working with technical partners Munro and Autodesk.

"We're making sure that we're helping people at the charrette capture these innovative ideas in real-time," said Rob Cohee, technical evangelist at Autodesk. "It's one thing to talk about innovative ideas. It's another entirely to be able to visualize design and simulate the digital prototype while design decisions are made, then add to that the ability to extract bills of material and drawing views. Digital Prototyping really allows you to change your perception of what is possible."

So what is possible for PV?

"At a minimum, we have an opportunity to map out current best practices," Bony said. "Hopefully the charrette will go beyond that and come up with new designs and processes that will drive down the cost of BoS for installed solar to $.50 per watt."

Kelly Vaughn is an analyst with RMI's Communications Department where she focuses on communications strategy and initiative development. She has her MA in Communications from University of Dubuque and extensive experience in social marketing and PR.

As Panels Get Better and Cheaper, PVs are Poised for Their Day in the Sun