Building a Green Brand by Creating Attraction to Your Products

Building a Green Brand by Creating Attraction to Your Products

Editor's Note: This is an exclusive excerpt from Michael Russo's new book, "Companies on a Mission: Entrepreneurial Strategies for Growing Sustainably, Responsibly, and Profitably."

Building an emotional bond to customers is one of several key elements of creating additional value for your products. Emotions are a key to understanding the behavior of consumers, as decades of marketing research shows. They are separate from the rational, calculative dimensions of decision, such as cost per use, efficacy, and longevity. But it turns out that using feelings to guide purchasing is surprisingly rapid and consistent. That is, it can be more effective to rely on the gut than on the gray matter when shopping.

This may well be one reason that green brands can be so powerful in markets: They elicit purchases based on emotion at least as much as those based on rational dimensions. Studies of so-called green marketing validate this emotional element. One robust result is that when consumers believe they are making a tangible difference on environmental or social criteria, this belief strengthens their commitments to products. A particularly provocative result was that when consumers sense that the character of their values and a company's values overlap, their propensity to purchase increases, as is the case with LOHAS customers in particular. 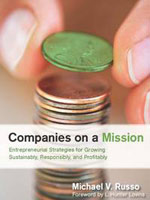 So here again, we see that for mission-driven companies, the content of the emotional bond is distinctive because it is so closely linked to the selling company. It is surely true that some conventional companies create emotional bonds with consumers. In products from companies as diverse as Harley-Davidson and Rolex, the brand images resonate with delighted customers. And although the image for many conventional products frequently does reflect the company (and often its founders), for mission-driven companies the company and its story are a central part of creating emotional ties to customers.

The ways in which mission-driven companies create these emotional ties to customers are varied, but the best ones leverage values and even elicit customer input into product and company decisions.

Chip Conley and Eric Friedenwald-Fishman, in their book Marketing That Matters, include a chapter titled "Emotion Trumps Data." They urge mission-driven companies to "connect with the heart first, and the mind second." Their point is that the emotional bond with customers can forge the type of loyalty that product attributes simply cannot. A key to this emotional bond is communicating the company's vision for social and environmental change and especially its own story of specific actions.

For mission-driven firms, this story can take on many plot lines. The Ben & Jerry's brand story has touch points that include the $5 correspondence course on making ice cream that Ben Cohen and Jerry Greenfield took, the company's progressive social programs, and its many innovative flavors. Think for a moment about how these elements each connect with powerful emotions:

The emotional bond does require opening up a bit about the roots of the company. Vincent Ben Avram launched Organically Happy, a Maryland web-based business that sells natural cleaning supplies. A tall and burly 40-something father, Ben Avram had a defining moment when he was bathing his infant son and reviewed the ingredients of the soaps and shampoos he was using. His dissatisfaction led him to natural skin care products.

His fledgling website is professionally done, filled with carefully chosen products, and even includes "Lucy, our on-line aesthetician and skincare maven." Like just about all websites, the Organically Happy site includes a tab titled "About Us." But the information there doesn't include any discussion of Ben Avram's a-ha moment. His disappointment with the site's low traffic can be the result of many influences, but having a more personal story about founding the company (perhaps with a photo of father and son) could help to create feelings of common emotion with potential customers by serving to put a human touch on his website.

Of course, you have to be willing to tell the story. Egg is a boutique advertising agency in Seattle. Led by longtime industry pro Marty McDonald, the agency works exclusively with sustainable brands and organizations. In their office near Pioneer Square, McDonald and partner Hilary Bromberg talked with me at length about the roots of what makes people buy. Bromberg, who studied neuroscience at Harvard and MIT, talked about the difficult of selling in 2009, as the world faced a "pullback from consumption."

Bromberg is also the ad agent for Canadian cereal manufacturer Nature's Path, which is reticent about aggressively advertising that it is the last large producer not owned by a larger parent. The company has been relatively inwardly focused, and its slogan, "Nurturing people, nature, and spirit," wasn't very lighthearted for a company that was quirky, independent, and playful.

The solution, for Bromberg, was to "give them permission to be themselves" in a way that underscored their uniqueness without being combative. The solution was a simple tagline: "Eat well. Do good." If it works, Nature's Path will broaden its appeal to mainstream cereal fans while staying tight with core customers.

Connecting the Product to the Common Good

As the marketing studies mentioned so far indicate, when consumers believe that they actually can affect a social or environmental cause with their purchasing behavior, they can bond with a company. It can be a matter of providing information at the point of purchase, so that consumers are educated about the effects the company has on its chosen points of impact.

Accounting in the aggregate can help. Newman's Own certainly gets enormous mileage out the quarter-billion dollars the company has given to charities since its 1982 birth in Paul Newman's basement. But personalizing such impacts can create a stronger emotional punch.

TOMS Shoes works to do just that. Since 2006, the Santa Monica–based seller of stylish casual shoes has had a straight-on social mission: For every pair of shoes sold, the company donates a pair of shoes to children in need. One for one: Simple and powerful. As its founder Blake Mycoskie parsimoniously states, "The design is not in the shoe but in the business model."

In 2008, TOMS Shoes expected to deliver 200,000 pairs of shoes to children in locations across the globe. Led by Mycoskie, TOMS has been able to leverage this social mission to create a powerful brand. The choice for casual wearing by Keira Knightley, Renée Zellweger, and other Hollywood luminaries, TOMS misses no opportunity on its website and in its sales materials to connect a consumer's purchase with footwear for disadvantaged youth.

For many in the growing middle classes in newly emerging economies, supporting the common good means doing more for their compatriots. So some mission-driven companies in those settings stress local content and connect it to their brands.

From its original location in Mexico City's trendy Condesa neighborhood, Sustenta Soluciones has grown into a fifteen-person company with annual sales of more than $1 million. The company works with companies that are launching campaigns to create memorable gifts made and grown by local artisans and farmers, frequently using high levels of recycled content.

Taking a page out of Freitag's book, Sustenta Soluciones took past advertising banners from Coca-Cola and fashioned them into bags, wallets, and even aprons while providing employment to indigenous Mazahuan women. The company provides seeds and seedlings from local trees to Banamex to be distributed by the company in a campaign to encourage customers to grow with the bank. It also engages in significant philanthropy -- for example, donating a portion of proceeds from sales of beautifully packaged spices to Naturalia, a nongovernmental organization that promotes species protection in Mexico.

Sustenta's founder, Santiago Lobeira, returned to Mexico after receiving his MBA from Duke University, determined to create a meaningful business. In person, he's able to project a blend of confidence, caring, and competence that goes over well in meetings with business leaders. Lobeira and partner Manolo Ruiz have developed a brand and a set of relationships so powerful that companies are now coming to Sustenta with further questions about social and environmental issues.

Branching into green communications and consulting may be possible, if Lobeira can avoid the greenwash he fears. As he says, "Everything comes from this positive energy" of giving something to fellow Mexicans. If Sustenta can grow without endangering this asset, it will convert its bright prospects into greater profitability.

A new and potentially powerful way to create emotional ties to customers is to actually bring them into the process of channeling benefits to social and environmental causes. The idea of co-creation of value has its roots in the service literature, although it has recently gained currency as a way to describe Internet models of serving customers.

The essential idea of co-creation is that customers are integrated into the process of product development and sales so that the final products actually reflect their real-time preferences. The idea benefits greatly from the Internet, which can break through the trade-off of "reach and richness," by presenting a more personalized experience to a large population.

Nau's innovation was to allow customers, at the point of purchase, to direct the donation created by their purchase to one of six charities. Thus the glow associated with the company's philanthropy is a little brighter for customers. Studies show that emotional ties to customers are strongest when they feel that the company's social and environmental policies are consistent with their own. What better way to forge this link than to empower them to set a small slice of company policy at the checkout stand?

Web-based businesses are particularly well suited to this task. And they can push the envelope even further. For example, when a customer purchases carbon offsets from CarbonFund.org, a special screen cues them to select the type of project that will be used to create the offset. Support reforestation? Then have your funds used to plant a new stand of trees. Other options include energy efficiency and renewables development.

The use of customer choice avoids other, perhaps more difficult approaches, which might include surveys that permit well-meaning but opportunistic representatives of causes to "stuff the ballot box" to have their organizations funded. Employing customer co-creation in these ways can create an emotional bond (especially when the customer receives notice of the exact number of trees planted for their particular offset purchase), and the interaction works to forge an emotional link by involving customers directly and specifically.

Such customers are also more likely to answer surveys and provide other information that permits a company to serve them with greater specificity and understand their motivations. As in other settings, this customer intelligence is highly prized and can lead to a competitive advantage for a mission-driven company.

The Risks of Emotional Attachment

The emotional side of developing customer value has a dark side, however -- one that companies must respect. When individuals invest their personal commitments in companies that they see as representing their higher-order values, a rapid and harsh backlash can occur when they smell hypocrisy and dishonesty on the part of companies.

The media are full of truth police, and although popular outlets can build up mission-driven companies, they can also expose gaps between claims and reality. The issue for marketing is clear: Doubts about the authenticity of the company or its initiatives can lead to customer resentment and even organized boycotts.

This doubt then presents mission-driven companies with an important challenge. They must somehow communicate their marketing message while avoiding a chin-jutting approach that can set the stage for a backlash. They must also be smart in how and where they present their goods to potential customers.

We are all social entrepreneurs

8 ways to make products a force for good

How parent companies can raise their 'brand children'