3 American Leaders in Green IT and Building Technology

3 American Leaders in Green IT and Building Technology

Watching the World Cup over the last few weeks gave me a new appreciation for soccer/football/futbol. Imagine passing, catching, shooting a ball with NO HANDS.

The goal that Ghana scored in overtime (sorry, "extra" time) to knock out the USA was, sadly, prettier than anything that Tom Brady or Jerry Rice could do with an American football.

So my national pride took a hit as the US was eliminated; fortunately it got a boost in an unexpected way on a trip to a client's event later that week. I spent the day at Panduit Corp.'s new company headquarters outside of Chicago, speaking to their executives and customers on my favorite topic: The role that IT leaders and IT organizations can play as enablers and catalysts of corporate sustainability initiatives.

In the course of Panduit's headquarters-opening event, I got a chance to visit with three companies with a lot in common: privately-held, headquartered a long way from Silicon Valley or Route 128, and family- or founder-led. Not the usual characteristics of innovative, high-tech firms. And yet all three are at the front edge of technologies being used to make buildings and data centers more efficient and less environmentally impactful: 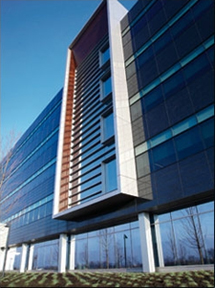 • Lutron of Coopersburg, Pa., founded in 1961 by the inventor of the rotary dimmer switch. A supplier of leading-edge lighting systems for green buildings. The lighting in the building's conference rooms and public areas was calm, cool, and extremely energy-efficient.


• Haworth of Holland, Mich., founded in 1948. A supplier of modular furniture, flooring and HVAC systems. I had not realized that "raised-floor" technology was being applied to offices and conference rooms, not just data centers. It turns out that feeding cool air through floor vents makes sense for all kinds of facilities.

• Panduit of Tinley Park, Ill., founded in 1955. A supplier of integrated electrical, network and monitoring systems, which make the security, voice, data, and power systems in the building more reliable and less resource-intensive.

All three of these companies were wonderfully showcased in Panduit's new headquarters, a facility designed to achieve LEED-Gold certification that opened this spring. It was inspiring to see these American success stories, in the heartland of the country, creating and providing advanced technologies that help companies run their operations more efficiently while reducing their energy and resource consumption. It took at least some of the sting out of the USA's disappearance from the World Cup's final acts.