Social Funds and BP: How Embarrassing!

Social Funds and BP: How Embarrassing!

If you are a shareholder in a so-called socially responsible or sustainable mutual fund, you may also be an owner of BP, the company responsible for the environmental catastrophe in the Gulf of Mexico.

When BP's oil rig in the Gulf of Mexico exploded on April 20, the company was a major holding of the Dow Jones Sustainability Index, which calls itself an index of "the leading sustainability-driven companies worldwide."

BP was also held by Pax World Funds ("sustainable investing is a better, smarter way to invest"), by the MMA International Fund, which is part of a fund group that is "guided by Christian values," and by the Legg Mason Social Awareness Fund, which, as of March 31, had BP as its single biggest holding.

These are not anomalies. When Cary Krosinsky, an editor of a book called "Sustainable Investing: The Art of Long Term Performance," tallied up the holdings of about 350 socially responsible investment (SRI) funds from around the world, he found that at the end of 2008, BP was the second biggest holding, in terms of how much money the funds had collectively invested. The five biggest holdings were Royal Dutch Shell, BP, Nokia, Vodafone and HSBC Holdings.

What's more, BP and Shell aren't the only oil companies held by the social funds. The biggest holding of a mutual fund called the Sentinel Sustainable Core Opportunities Fund, which says it "screens for fundamentally strong, well-managed companies with sustainable business models and a commitment to corporate responsibility," was, as of March 31, believe it or not ... Transocean, the world's largest offshore drilling contractor, which operated the Deepwater Horizon rig for BP. 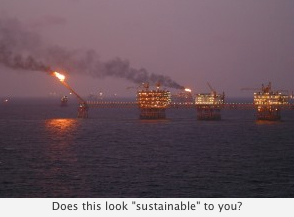 While no mutual fund manager could have foreseen the oil rig explosion, you've got to wonder how a fund with the word sustainable in its name could have as its biggest holding an offshore oil drilling company. I emailed Sentinel to try to probe their reasoning a bit. You won't be surprised to hear that they declined to be interviewed.

So what does the BP-SRI connection tell you? At the very minimum, it suggests that any investor in a mutual fund that calls itself socially responsible, sustainable, green, blue or any other color would do well to dig deep beneath the magazine ads and website fluff to understand what the fund is really all about. (Disclosure: I'm a small investor in Calvert and Domini Funds, and a believer in the SRI idea.) Some SRI funds still focus on feel-good, negative screens that shield investors from weapons, tobacco and alcohol, and don't get much more analytical than that. (See Socially Responsible Investing's Silly Screens)

As Cary Krosinsky, who now works for Trucost, a research firm that focuses on environmental risks, told me: "The SRI world in the U.S. developed largely around social issues, and it's still largely focused on values. Some funds don't look as closely at the environment."

The other reason why many SRI funds bought BP is that they want to track stock-market indices, and so they seek exposure to the oil and gas sector. Otherwise, when oil company stocks boom, the performance of these funds will suffer.

For social funds that want to buy oil-and-gas stocks, BP and Shell were the obvious choices because they have had more progressive policy positions on climate change and they invested in renewable energy.

Bennett Freeman, senior vice president for sustainability research and policy at Calvert, says that BP under its former CEO, Sir John Browne, in the late 1990s and early 2000s, was a pioneer in its approach to corporate responsibility. "It's easy and appropriate and necessary to criticize them now," Freeman says, "but these were the guys who broke the crockery in the industry on climate change. The same on human rights."

Interestingly, Calvert never held BP in its traditional mutual funds, which invest only in companies that meet all of its environmental, social and government standards. But Calvert did own BP in a large-cap value fund which is one of its SAGE funds. SAGE stands for "Sustainability Achieved Through Greater Engagement." The theory is that by engaging in shareholder advocacy, Calvert will try to to improve the social, environmental and financial performance of its SAGE holdings, which include ExxonMobil, Walmart and Duke Energy. Shareholders in SAGE funds, in other words, cannot expect purity or anything close. Even so, Calvert sold BP in June, explaining its reasoning in this thoughtful and strongly-worded statement.

By contrast, Pax World held BP in one of its traditional SRI funds. As Joe Keefe, Pax's president and CEO, told me by email: "BP had been on Pax's approved list prior to the spill and our research indicated that historically it had a good environmental record, good disclosure, etc. vs. its industry peers." True enough.

But, even prior to the spill, BP had run into some very well-publicized problems: a fire and explosion at a Texas oil refinery in 2005 that killed 15 workers, injured 170 and led to an OSHA fine and censure, serious pipeline problems in Alaska that led to oil leakage and date back to 2006, and civil and criminal charges that BP engaged in price-fixing in the propane market that led to a $303 million settlement with the U.S. government in 2007.

In his email, Joe says that Pax World had put BP on its watch list because of safety problems and decided earlier this spring to sell its shares. Pax divested on April 29 -- nine days after the spill. "Our process was working," he writes.

I disagree -- no socially responsible fund should have held BP after the events outlined above -- but I will reprint Joe's email below so that you can decide for yourself. He deserves credit for his willingness to explain the fund's thinking.

More credit, though, should go to the social funds managed by Domini and TIAA-CREF, which never held BP at all.

Nor did a relatively small number of funds that focus not on "less bad" companies but instead seek to invest in businesses that are trying to solve environmental or social problems. I'm thinking here about funds like Portfolio 21 and Paul Hawken's Highwater Global Fund. (See Paul Hawken's Winning Investment Strategy.)

Because the bottom line for the SRI funds that held BP is this: They owned  a company that turned out to be bad for the planet, bad for their reputation and, at least lately, a very bad investment, too.

Here's Joe Keefe's email to me on PAX and BP:

As you know, many of the ESG/SRI funds owned BP based in part on its reputation as an environmental leader. I believe it was at one time, and perhaps still is, the largest investor in alternative/renewable energy in the world.

BP had been on Pax's approved list prior to the spill and our research indicated that historically it had a good environmental record, good disclosure, etc. vs. its industry peers.

In 2009, however, BP was fined $120 million for a Texas refinery explosion that killed 15 workers. (The explosion actually took place in 2005 but the outcome of the proceedings and fine were apparently rendered/levied in 2009.)  In October 2009, during our annual review of the company, we put the company on a watch list due to safety management concerns, and pursuant to our watch list procedure, we started reviewing BP on a monthly basis.

In March of 2010 we learned that the company had been fined again by OSHA for more than 60 safety violations at an Ohio facility. We therefore put the company under full review again for safety management concerns, a review it ultimately failed, meaning that it no longer met our ESG criteria and was not eligible for investment. While that review was actually underway, the Gulf Oil explosion/spill occurred. The company was only held in one of our 11 funds at the time, and the portfolio manager sold the company almost immediately -- all 8,000 shares were sold on April 29 -- due to concerns over the costs of clean-up, remediation, etc.  (The decision to sell at that point was still optional but would have been mandated a short time later when our company review was complete.)

So, although we owned the company on the date of the spill, my view is that our process was working: We identified a pattern of safety management issues -- which the Gulf explosion/spill was an example, really the ultimate example, of -- that caused us to put the company on a watch list in October 2009, and then under full re-review in the spring of 2010, which the company ultimately failed. Obviously, it just so happened that the BP spill occurred during that re-review -- but it could have occurred at any time. A traditional money manager or mutual fund company that didn't look at ESG issues and didn't care about workplace safety issues would not have had a basis for divesting the company, as we did (albeit after, not before, the spill -- but again, the spill could have occurred anytime). My point is, I think our process was working. It cannot perfectly forecast or avoid all company blow-ups, but I think it helps us to avoid them. In this case, it is plausible if not likely that we would have divested later -- and our shareholders would have lost more value -- but for our attention to ESG issues.

Mutual Interests: Finding Your Way to a Greener Retirement