On Sunday I woke up in a hotel in Manaus, Brazil, had breakfast overlooking the Negro River, then went for a run along the river’s beaches. It was an enjoyable way to begin my first visit to Brazil, a six-day, government-backed, jam-packed tour with a focus on the environmental issues facing the Amazon.

Environmentalists have labored for decades to protect the impossibly vast rainforests of the Amazon, which make up more than half of the world’s tropical forests. But until recently they had little to show for their efforts. (Ben & Jerry’s Rainforest Crunch doesn’t count.) Since the 1970s, about 230,000 square miles of the Amazon have been lost to development, mostly cattle ranches, soy plantations and illegal logging.

Only lately has the rate of deforestation began to slow, thanks to more progressive government policies and corporate campaigns by NGOS, notably Greenpeace.  Just last week, there was encouraging news from a British think tank called Chatham House, which published a major report on illegal logging around the world. Fiona Harvey wrote in the Financial Times:

Illegal logging has fallen by 22 percent worldwide in the past decade according to a report published on Thursday ...

The assessment found that that in certain key countries the decline was even more dramatic, showing a fall of between 50 and 75 percent in the Brazilian Amazon, 75 percent in Indonesia and by about half in Cameroon.

In Brazil in particular, an overhaul of logging laws and a new zeal in enforcement have led to a significant drop not only in illegal logging but also in overall deforestation rates in the Amazon, according to satellite data from Brazil’s National Institute for Space Research.

Why should you care?

The big reason is that deforestation is a major cause of greenhouse gas emissions, accounting for as much as 20 percent of global emissions, scientists say. Preventing deforestation of the Amazon is incredibly complicated: It requires good government policy, effective local law enforcement, satellite monitoring and global cooperation because soy, beef and logs are shipped from Brazil to the U.S., Japan and Europe. Rich countries, NGOs and even some corporations  have been trying for years to find way to create market mechanisms or outright grants that would get money to places like the Amazon, so that trees are worth more standing than cut down.

Even oil and coal companies like this idea because preserving trees is low-cost way to generate carbon offsets and one of the very cheapest ways to fight climate change -- much less expensive, say, than building solar or wind power.

Tropical forests are also storehouses of biodiversity that are the source of medicines, food and chemicals used worldwide.

Manaus has been the gateway to the Amazon since the 19th century. You can get here by plane or boat but no roads connect the city, which is home to about two million people, to the rest of Brazil. (In that regard, it’s a little like Juneau, Alaska, but hotter.) A half dozen or so reporters are taking this trip; this afternoon we took a brief tour of Manaus, which has its charms but has seen better days.

Much better days, it turns out: The city boomed in the 1890s after Charles Goodyear invented vulcanized rubber and the John  Dunlop figured out how to make it into inflatable tires, creating enormous demand for the sap from Brazilian rubber trees. A relic of that period is the Teatro Amazonas, an opulent opera house, made with Italian marble and glass and Scottish cast iron imported from Europe. A very kind guard let us in (the place was closed) and we heard musicians practicing for a concert. 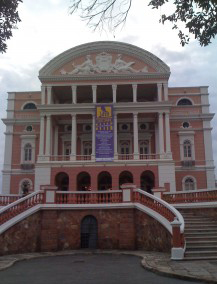 Our tour also took us to an unfinished bridge that will soon span the Negro River, connecting Manaus to towns to the south. Right now the only way to cross the river is by ferry. Roads remain a contentious issue in the Amazon region, we were told. Lots of local people want them, to get better access to markets, education and health care, but more roads means more development, opportunity for logging and deforestation. (We’re interviewing Brazil’s environment minister later this week, and I’ll ask her about this.) Here’s a look at the bridge, with the ferries at left: 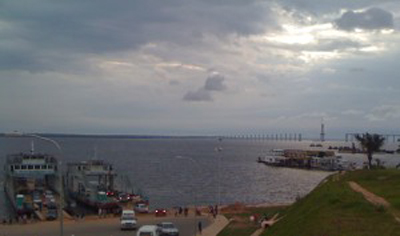 On Monday, July 19, we took a 90-minute flight into the Amazon to see an an oil and gas plant operated by Petrobas, one of the sponsors of this trip; we’re told they’ve taken steps to preserve habitat. On Tuesday, we’ll fly to Santarem, a city on the Amazon River, for meetings with the Brazilian Institute of Biodiversity and then to see a sustainable development project in the Tapajos National Forest. My week will conclude with visits to Brasilia and Sao Paulo. By Saturday, I will have taken 11 flights in eight days. I hate to think about my carbon footprint this week.

Disclosure: My trip is being organized by APEX Brazil, a government-backed agency that promotes trade and development, with financial support from Petrobras, Eletrobras and Banco do Brasil.

Are Your Cheeseburgers Causing Deforestation?

Is There a Greener Side to Drilling for Oil?