If you build it they will come. Starting in Q4 2010, that's what the Big Three and other manufacturers are banking on as they begin to roll out the first serious wave of electric vehicles to hit the market since the 1990s. International representatives from GM, Ford, Chrysler, Nissan, Toyota, and dozens of manufacturers, utilities, EVSE suppliers, experts, and enthusiasts convened last week at Plug-in 2010 in San Jose to prepare. The principal theme uniting the disparate stakeholders was a call to raise consumer awareness for the changes to come.

Although EVs and plug-in hybrids represent 1 percent of global automobiles, this segment is expanding as consumers seek ways to save money and reduce consumption of foreign oil. During the gas price spikes of 2008, U.S. buyers of electrified solutions such as the Toyota Prius reached 3 percent. Manufacturers believe it'll happen again, and when it does, consumer commitment will escalate from there. Even now, "early adopters and do-it-yourselfers have created substantial market pull," said Alan Montemayor of Southwest Research Institute.

Consumers' choices are due to proliferate substantially starting later this year. The Nissan LEAF and Chevy Volt will lead the next generation of electric cars out of the gate. The 2011 LEAF, a zero-emission BEV with a range of 100 miles, will be deployed first in California, Oregon, Washington, Arizona, and Tennessee. In January, the LEAF will launch in Texas and Hawaii, and will roll out to all states by the end of 2011. The Volt is an extended-range electric vehicle or PHEV (depending on whom you ask) with a capacity to go 40 miles on pure electric power plus 260 additional miles with a 1.4-liter engine powering a generator to sustain the battery charge. The Volt will launch in California, New Jersey, New York City, Connecticut, Washington D.C., and Texas by 2011, and will reach all states and Canada by mid-2012.

The base MSRP for the LEAF is $32,780 and for the Volt is $41,000, but Volt buyers can also choose to lease the cars for 3 years with $2,500 down and $350 per month. This makes the cars roughly the same price per month to drive. Both cars qualify for a $7,500 Federal electric-vehicle tax credit. Both cars come with an eight-year, 100,000-mile warranty. This neck-and-neck competition to win over drivers suggests that consumers are in the driver's seat of the latest electrified solutions.

Niche innovators are carving off their own piece of the market. I test drove the THINK City, a highway-approved vehicle with refined, IKEA-inspired styling. The car has appeal for Cultural Creatives and empty nesters alike, although initial sales are focused on fleets until U.S.-based service centers are up and running. 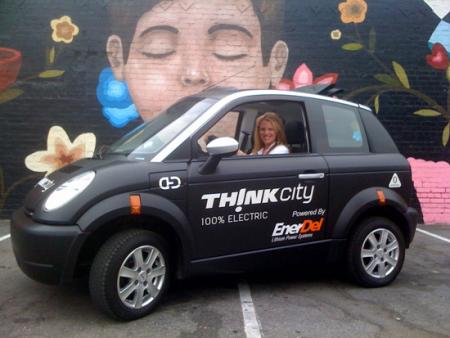 Sustainability has long been a competitive differentiator for several standouts. Now it seems that few manufacturers can afford not to pay attention. "Electrification will be embedded into the fabric of Ford Motor Company going forward," said Nancy Gioia, Director of Global Electrification for Ford. Although hybrids, plug-in hybrids, and BEVs comprise only 1 percent of today's Ford fleet, the company estimates between 10 and 25 percent if its fleet will be "electrified" by 2020.

With choices spanning PHEVs, BEVs, and extended-range EVs, as well as various EVSE and charging options, education is critical to managing driver expectations. If drivers aren't equipped to discern which vehicle is best for them, they could end up disappointed. "We're in for a very short honeymoon period," warned Gioia. "At the end of the day, clarity of communication is going to be so important."

"Nissan is in a strong position with fantastic marketing and a beautiful transaction price, but there is still some resistance to overcome with the customer," said Tom Wheat of Southern California Edison. Potential BEV and PHEV buyers are still waiting for the costs to come down and the battery capacity to improve. Multi-family dwellings also offer limited access to the three-pronged outlets required for charging.

Still, much of the resistance to electrification can be attributed to challenges that are more perceived than tangible. For example, range anxiety, the fear that the battery will run out of juice before getting to a charging station, is a bogeyman in the night that fades with experience. Over 95 percent of Americans drive less than 100 miles per day, a range that today's EVs can accommodate. Public chargers go virtually unused in Berlin, for example, because drivers charge at home at night. Results were similar in EV demos around the world.

For marketers, "showing short vignettes of what other households are doing gets a much more favorable response than talking about the 'limitations' of batteries," said Ford's Gioia. "Changing behavior is hard, like starting an exercise program. We have to make it fun and engaging. It can't feel like doing your taxes. People need a coach."

According to Ken Kurani of the Institute of Transportation Studies at U.C. Davis, "Positive framing can ensure that the differences in EVs aren't seen as impediments to electrification." Citing George Lakoff's linguistics work, Kurani explained, "Frames are mental structures that provide short cuts for the brain as it processes the way we see the world." Our existing EV frame, forged in 1990s, says, "EVs are different from conventional cars, therefore people will not buy EVs."

"But this frame is a trick," said Kurani. "It treats energy like energy like energy." Electricity is, in fact, a vastly different source of fuel than gasoline -- not least of all is that it's much less costly. On average, it costs about $300 per year to drive an all-electric car.

Kurani proposes an alternative frame: "EVs give access to new values through the substitution of electricity for gas." In the new frame, the single-pedal electric drive train is heralded for its acceleration and quiet, smooth ride rather than derided for being different. "Recharging can be reframed as an opportunity to avoid gas stations," explained Kurani.

The environmental aspects can even be framed as a chance for Americans to get away from Big Oil and become tech leaders, a message that resonates with green-minded consumers and non-green consumers alike.

Kurani says that instead of trying to assuage fears about hot-button issues such as range anxiety, "we can frame this more like a fun game" by encouraging the use of new tools like online mapping. Over time, technological advances such as DC fast charging could extinguish range anxiety, although it will continue to be perceived as a challenge in the near term.

"People learn and adapt," said Kurani. "Some people will even buy these cars because they are different."

The experience of early adopters driving their EVs can lead to wider adaptation, especially as word travels through drivers' social networks.

"There is a 'Keeping up with the Joneses' aspect to EV acquisition," said Tom Wheat of Southern California Edison. Citing a study of social influencers, the majority of drivers -- 50 percent non-hybrid and 61 percent hybrid drivers -- indicated "what others in my community" drive (over friends, family, co-workers and visits to dealerships) as the primary social impetus for buying a given type of car.

The tendency for neighbors to spur EV acquisition is leading to a clustering effect. With each vehicle roughly equivalent to the electric demand of one house, penetration in neighborhoods where EVs cluster could threaten local service reliability. Smart charging -- technology to allow owners to program their EVs to charge only at certain times of night or at certain electricity rates, as a way to lessen demand on the grid -- isn't happening anytime soon, so utilities will have to find ways to handle the extra load.

Home-based, overnight charging -- which utilities prefer -- also happens to be sensible for consumers because of convenience and the fact that electricity is plentiful and cheap at night. Still, "it's going to require a fair amount of education and outreach to sensitize people to the behaviors of the grid as well as the best way to save money," said Wheat.

Utilities, therefore, must do their part to ensure the reliability of charging EVs. "Utilities and OEMs have intersecting interests and responsibilities but they are completely interdependent," according to Michael Sullivan, co-founder of San Francisco-based energy consulting firm Freeman, Sullivan & Co.

In fact, Sullivan's research shows that reliability and dependability are paramount for buyers, followed by economic considerations in initial cost, fuel economy, and overall value. Impact on climate, dependence on foreign oil, style and comfort ran a distant third to dependability and price factors. All this suggests that, at the end of the day, consumers still want the same things out of EVs as they do regular cars.

To ensure that dependability is not compromised early on, it is vital that utilities prepare. "What is just over the horizon is big," said Sullivan. "When it gets here, we're going to stop this thing cold in the market unless we're ready for it."

According to Bob Hayden of the City of San Francisco, "Communities will need to do a significant amount of work to prepare for these cars coming." Hayden cited a number of areas calling for community support, including the planning and installation of public infrastructure; examination of charging for multi-unit dwellings; coordination with utilities; enrollment of businesses for workplace charging; commercial and municipal fleet purchases; local government policies; and the cultivation of a stakeholder network to educate and promote awareness.

Even retailers can help promote a seamless, service-oriented electrification process. Best Buy will upgrade its business format to break into the transportation sector, and a host of suppliers and dealers are keeping an ear to the ground for opportunities.

Electrification will be "a 50-year journey," said Ford's Nancy Gioia. "It's going to take humility. We don't know what we don't know, but we do know that the technology will rapidly improve," continued Gioia. "We Americans are great at innovation…but this marathon will take an enormous amount of staying power."

Fourteen years since GM's EV1 was launched, and 4 years since "Who Killed the Electric Car" documented its demise, the electric vehicle has returned with a vengeance. Many of the details are still absent, but commitment does not appear to be one of them.

"We're making history here," said Donald Kintner of the Electric Power Research Institute during our conversation about the ongoing, complex collaboration amongst stakeholders over standards. "You're going to be able to tell your grandchildren about the day you were sitting in this room listening to us sort all this out." I do believe he's right.

Anna Clark is president of EarthPeople, LLC and the author of Green, American Style. She contributes the Eco-Leadership blog on Greenbiz.com. Visit www.AnnaMClark.com for more on all things green.

Ford, Edison Team Up to Bring Plug-in Hybrids to Market