Spotlighting the Green Benefits of LEDs

Spotlighting the Green Benefits of LEDs

[Editor's note: William Dinkel, an avid blogger on green technologies and energy efficient solutions, contributed to the reporting and research for this article.]

The capability to provide artificial sunlight has dramatically expanded the boundaries of time and space, adding hours to the day when we may see and illuminating where sunlight was unable to penetrate. Since the first humans carried a torch to provide light, heat has been a by-product of producing light.

Traditional electric lights continue to give off more heat than light. An incandescent light bulb uses a paltry 10 percent of its energy to create light. Fluorescent lighting -- which has been the green standard in energy efficiency -- still wastes nearly half of the electricity it consumes in generating heat. All of this lost energy is significant considering that lighting devours more than a quarter of a typical commercial building's electricity, as reported by the U.S. Energy Information Administration.

LED, or light emitting diode, fixtures, in comparison, are twice as efficient as fluorescents at converting electricity to light and hence generate very little heat. In addition to improved energy efficiency, LED fixtures are nearly maintenance free and provide high quality of light. They are also dimmable, contain no mercury and tolerate frequent on/off switching without degrading their lifespan. 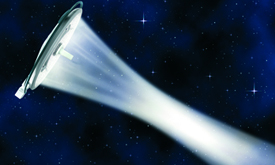 Since UCSF Medical Center replaced some of its surgical lighting with LED fixtures, doctors and nurses no longer complain about the heat from the light fixtures when performing surgical procedures.

"Previously we had to chill the OR [operating room] to offset the heat generated by the old fixtures," UCSF Project Manager John Lewis explained. "The new LED lights do not radiate heat and the OR medical staff is comfortable at standard OR temperatures."

Quality of light is an important issue to adoption of any new lighting technology. Fluorescents were unable to replicate the incandescent bulb's soft and pleasing glow and disappointed both professional lighting designers and the cube dwellers who toiled under their unnatural glare. LEDs hark back to a more basic light source, the sun. The spectrum and color rendition come closest yet to natural daylight.

An LED is a semiconductor that creates light by releasing energy from electrons. It is frequently referred to as "solid state" or "digital" lighting. Because LED fixtures generate light over an area using thousands of tiny light sources, the fixtures also provide a clear, shadow-free light field that is ideal for task work, whether an accountant, engineer or surgeon.

"The most important criteria for our application is the quality of light. After an early test, we eliminated fluorescent fixtures since fluorescents render colors poorly," Lewis said. "The medical team found the quality of light provided by the new LED lighting was superior to the existing incandescent lighting."

Much of the savings stems from the improved energy efficiency of LED lighting; up to 70 percent less energy is required to produce light. An added benefit is reducing heat generated, which saves on air conditioning and is noticeable in an operating room, office or data center.

Adding to the cost benefits, LED manufacturers promise an exceptionally long life of 10, 15 or more years. Shifting from disposable to durable lighting eliminates the maintenance costs such as tube and ballast replacement that are standard with fluorescents. Adding to replacement costs is proper disposal of the mercury-based fluorescent tubes.

The Pittsburgh International Airport found the ROI compelling. The airport is installing more than a thousand LED fixtures to cover over a million square feet in its garage (pictured below) and passenger loading and unloading area. The project is believed to be largest single installation of LEDs to date. 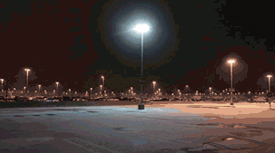 "Not only does the LED technology reduce our energy costs, it also reduces maintenance," said JoAnn Jenny, director of communications for Allegheny County Airport Authority.

To further improve ROI, there may be grants and incentives available. Pittsburgh International Airport is taking advantage of a state grant to subsidize installation of LED lighting. With the grant, the pay-back period is cut by half.

Although LED fixtures offer compelling advantages, there are barriers to adoption. Kim Parsley, a principal for IA Interior Architects, which focuses on sustainable commercial building design, commented, "We are still recommending T5 fluorescents for office and retail spaces. We are cautious about the claims of LED lighting providers and want more case studies. The upfront costs are also off-putting to clients."

To overcome these early adopter risks, Pittsburgh International Airport first completed a small pilot and then negotiated guarantees from its vendor that the LED fixtures would achieve the advertised light output, efficiency and life expectancy.

LEDs are starting to light standard commercial installations such as offices and retail. Last year, Unilever's new 400,000-square-foot headquarters (pictured above) used LEDs as primary electric light source. Starbucks also announced last year its plan to retrofit all of its 8,000 company owned stores with LED fixtures and is on-track to roll-out by the end of this year.

Costs are expected to decline with continued improvement in performance. Sandia National Laboratories completed a LED study in 2001 [PDF] to develop a price / performance model. In that paper, Drennen, Haitz and Tsao described LED improvements over the previous thirty years, "In a Moore's-law-like fashion, [light] per unit has been increasing 30x per decade ... Similarly, the cost per unit … has been decreasing 10x per decade." Improvements in this decade have been consistent with the model.

The most favorable ROIs are for those applications where the lighting is expensive to operate:

Even when the ROI satisfies the company's hurdle rates, other complications may limit the realization of benefits. Since many commercial buildings are leased, if the installation pay-back period is longer than the lease or the tenant does not pay for electricity used, then the tenant has no incentive to make the investment. In these types of scenarios, the tenant and landlord need to negotiate to determine an equitable way to share the costs and benefits of an LED installation.

When selecting LED providers, the Department of Energy (DOE) has established a certification program to test and compare various LED products. Since technology advances continue, DOE and other industry groups should be checked periodically for latest insights.

No matter the lighting technology selected, the first step is to reduce the lighting required and then find the most efficient technology for the remainder. Incorporating day lighting reduces the need for artificial lights. Presence detectors and automatic dimming to maintain correct level of light will  eliminate waste.

The newest use for LEDs, developed by NASA, is to provide light to grow plants for oxygen and food in space. The research from this space application has been transferred to medical uses in the treatment of cancers (see picture, right). 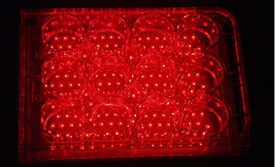 The nonprofit Light Up the World Foundation is developing and distributing solar LED lighting to poor people in remote areas who still rely on kerosene lamps and wood fires. This old style lighting creates toxic emissions that debilitate the health of those exposed; especially vulnerable are the young and chronically ill. The new LED light is appreciated for its bright illumination as well as its clean and frugal operation.

The quest to provide artificial light has always been about discovering more efficient and safer lighting technology. LED lighting is the next step in that evolution. LEDs have already expanded from niche lighting to standard commercial applications in the last few years. And LED technology is helping to open new frontiers because of its low energy requirements and ability to mimic sunlight.

Project and Other References

ROI Calculators: There are many on-line calculators available from suppliers. Ensure that the calculator considers maintenance and number of hours of operation. Although helpful that a calculator provides default values for energy costs, existing lighting and other parameters, it is best if these can be updated to reflect more accurately the ROI for a particular installation.

Unique Characteristics of LED DOE: As identified by the Department of Energy, LEDs have several unique characteristics that make them ideal for specialized applications.  For example, LEDs perform better in cold temperatures making supermarket refrigerator cases a good use. They also do not emit UV light. UV light will damage archival materials and can be irritating to skin and eyes. For more LED applications, the DOE created an excellent publication. (Download the PDF here.)

Claudia Girrbach is a senior director in the IT department at Gap Inc., as well as a member of the company's EcoCouncil and Employee Engagement Team. She also authors the blog Going Green - Tips for Business.  William Dinkel, an avid blogger on green technologies and energy efficient solutions, contributed to the reporting and research for this article. William works at Hewlett-Packard and holds a BS in computer engineering from California Polytechnic University, San Luis Obispo.

How Starbucks Saves Millions a Year in Energy with LED Lighting

4 Tips on Buying CFLs for Your Business