Take the creativity of countless startups, the heft of a big corporation, $200 million in prize money, savvy venture capitalists, the power of digital media and the wisdom of crowds.

Put them together and you have the ingredients of GE's Ecomagination Challenge, a promising way to speed innovation towards a smart grid, clean energy and eco-friendly homes, buildings and cars.

Promising ... because we won't see results for a while.

Unveiled with fanfare by GE chief Jeff Immelt in San Francisco in July, the Ecomagination Challenge has generated more than 3,000 entries and 60,000 comments and votes. This week, GE will announce the top vote-getters and next month it will announce the winners, which are selected by a panel of expert judges.

GE and its four venture capital partners -- Emerald Technology Ventures, Foundation Capital, KPCB and Rockport Capital Partners -- have said they will invest $200 million into the most promising startups and ideas. Grants could range from $100,000, to further research a new idea, up to significant equity investments in existing startups, which would also get marketing and manufacturing support from GE. GE already has significant investments in clean tech companies like A123 Systems, which makes batteries, and Southwest Windpower, which makes small-scale wind turbines. This is an effort to find more.

How's it going? Some of the ideas seem, to put in kindly, long shots. An electric generator powered by garlic? (See it on video here.) Rotating houses? A "Wind Turbine Electricity Generation Without the Wind." What's next: solar panels that don't need sunshine?

Amidst the thousands of entries, several caught my attention, and the attention of voters:

One is Solar Roadways, the brainchild of a mom-and-pop couple in Idaho. Scott Brusaw is an electrical engineer, a former sergeant in the Marine Corps and a former Boy Scout scoutmaster, and his wife Julie Brusaw is a marriage and family counselor. They want to make roads out of solar panels, protected by a material similar to that used in the "black boxes" in airplanes. LEDs could be added to light up roads at night, and heating elements could be installed to melt snow, all powered by the sun. They're even talking about putting sensors in the roads to warn drivers if animals are crossing. The Brusaws got a contract from the Federal Highway Administration to build a prototype in 2009, and he was invited to give an entertaining TEDx talk last spring in Sacramento.

Interesting, too, is Welectricity, which is described as "a social network that promotes household energy efficiency through behavioral nudges." Think Facebook meets your utility bill. Electricity users could set up profiles, and their bills would be graphed and compared to one another. (You could send a boastful tweet when your bill is lower than your neighbors!) The idea comes from Herbert Samuel, an energy consultant from the Caribbean island of St. Vincent.

I was also struck by an entry called From Net Zero to Waste Zero which uses a combination of solar PV, wind and geothermal energy to design a low-cost house that lives off renewable power. (That's an image of the house, above.) The idea comes from Sam Qin, a Canadian entrepreneur who coordinated the design of a zero net-energy house for the Canadian government during the 2008 Beijing Olympics.

Whether any of this is truly new -- and, more important, scalable -- is very much an open question. If we lived in a perfectly efficient economy, where any entrepreneurs could get a hearing at venture capital firms, and the best ideas would get funded, we wouldn't need a competition like this. But we don't, and that's why new models for innovation -- like the automotive X-Prize -- are worth trying. If nothing else, GE's challenge has spurred a lot of online conversation and positive buzz for GE. 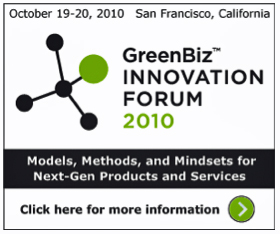 More ideas and discussion about how to transform business to make it more sustainable will be featured at the inaugural GreenBiz Innovation Forum October 19 to 20 in San Francisco. More information is available at www.greenbiz.com/innovationforum.

Jeff Immelt on Crowdsourcing, 30 Rock, and Why 'Green' Is No Longer Gold

IF11: Innovation is Alive & Well