According to the EPA, the total greenhouse gas emissions in the U.S. in 2008 were 6,956.6 million metric tons of CO2e with electric power industry responsible for the highest percentage of emissions (35 percent of total emissions).

In July 2010, the latest climate and energy bill -- the American Power Act sponsored by Senators John Kerry and Joseph Lieberman that would have capped GHG emissions -- failed to pass in U.S Congress. The cap-and-trade bill aimed to cut U.S. GHG 17 percent from their 2005 level by 2020.

Cap and trade is a market-based mechanism that allows for flexible and cost-efficient means of meeting the GHG emissions reductions obligations. The key feature of cap and trade is the possibility for an emitter that has met its cap obligations to sell excess emission permits to other emitters that are failing to meet the assigned goals and need to purchase extra permits to cover their emissions.

One additional flexibility feature of cap and trade is the option allowing entities under compliance to use carbon offsets. Carbon offsets is a term to describe reduction, avoidance, destruction or sequestration of GHG emissions from a specific project that is used to compensate for emissions occurring elsewhere. The offsets can reduce the cost of compliance with emissions caps by allowing regulated entities that find it economically advantageous, to buy or develop carbon offset projects rather than bear the cost of directly reducing their emissions as part of an overall company strategy.

Carbon offsets are not the solution to the bigger problem of reducing the dependence on high-carbon fuels, but are a very cost-effective tool to reduce the economic impact of the cap. They provide temporary cost relief for entities subjected to emission caps during the process of reducing their overall GHG emissions.

Because Congress was not able to pass a comprehensive legislation that would regulate GHG emissions, the U.S. Environmental Protection Agency is mandated by the Supreme Court to take action. On May 13, 2010, EPA released its final "Prevention of Significant Deterioration and Title V Greenhouse Gas Tailoring Rule" under the Clean Air Act.

The rule is called a "Tailoring Rule" because it is designed to tailor the standard CAA emission thresholds up to a size that is administratively workable for regulating GHG permitting. 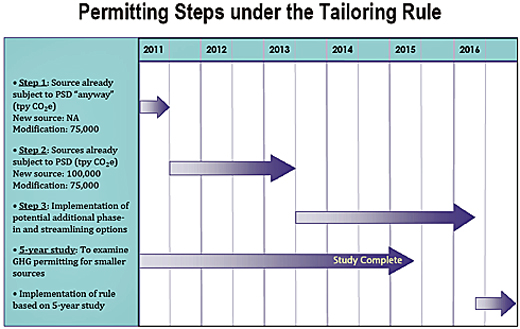 Given the approaching effective date, the Tailoring Rule will have immediate impact on the companies currently in an air pollution permitting process, planning new facilities, or implementing modifications to existing facilities in the near future. These companies should calculate their GHG emission potential to determine if it will exceed the thresholds under the Tailoring Rule, and if so, companies should consider the options of either avoiding GHG permitting or demonstrating compliance with still undefined "best available control technology" (BACT) requirements for GHG.

The CAA "command and control" approach instead will eventually mandate the adoption of the most stringent control technologies (and possibly most expensive), as a consequence of comparing unattained imposed limits and monitored concentrations.

This last point raises crucial doubts regarding the effectiveness of this approach in the case of GHG, where concentrations in the atmosphere, because of the long-lasting nature of GHG, are independent from the location of emission sources. Also there is no scientific agreement on the maximum concentration value that should be allowed for GHG in the atmosphere. This leaves ample room for uncertainty regarding the future development of the CAA regulation of GHG when, after the initial permitting phase, it will be necessary to design and implement the control phase, mandating emission limits and means to achieve them.

GHG intensive industries which will be the most affected by any regulation seem to be in favor of two options: 1) No regulation at all or 2) a cap-and-trade scheme in place. Unfortunately for them, given the impasse in Congress, there will be a third option -- EPA regulation.

[Editor's Note: Kasia Duda supplemented the piece above with the following summary of a recent panel discussion on cap and trade as the optimum option for greenhouse gas regulation in the U.S.]

Carbon Credit Capital LLC, as an affiliate to Climate Week NYºC 2010, organized the panel discussion "A Cap-and-Trade for U.S.-based GHG Emitters is the Optimum Option" at the conference where prominent climate experts and senior executives discussed the latest regulatory outcomes and implications for the power industry.

Mary Rose Brusewitz, a partner at Strasburger & Price LLP, who works in the area of renewable energy and assists clients in registering, selling and monetizing carbon credits, moderated the panel whose participants included Michael Gerrard, the director of the Center for Climate Change Law at Columbia Law School.

Gerrard, the first person in the world to hold an endowed chair in climate change law at an educational institution, started the discussion with a brief presentation on legislative and regulatory developments currently considered in the U.S.

Gerrard said that he thinks the chances of Congress passing a climate bill this year are bleak, and as a consequence the EPA will proceed forward to mandate GHG emissions.

Panelist speaker David Westman, the climate and sustainability manager for Con Edison in the utility's Environment, Health, and Safety group, said he favored a cap-and-trade as a preferred option for utilities.

Westman stated his support for the Regional Greenhouse Gas Initiative, an effort by northeast and mid-Atlantic U.S. states, and argued that RGGI is a first and very important step in moving towards a market based mechanism.

He added, however, in order for a cap-and-trade scheme to be most cost-effective, it has to be economywide and not be limited to just capturing the electric generation sector, as in the case with RGGI.

Con Ed is at the forefront of companies reducing their GHG emissions, (first place according to the latest Climate Disclosure Project reports) with the goal of reducing emissions to 3.5-3.9 million tons of CO2e by 2020. In 2009, Con Edison's emissions were 17.8 million tons and the challenge, Westman said, lies in encouraging customers to reduce emissions as the company is already implementing programs to reduce its direct emissions to a minimal level.

According to Westman, utilities are being held to a very high standard, especially to disclose emissions, and as a consequence utilities have to be much more involved in helping customers adopt new, low-carbon habits.

Panelist Rena Gelb, vice president of operations and director of carbon finance at Carbon Credit Capital, discussed offsets as a way for utilities and other entities under caps to meet requirements to reduce emissions.

Gelb argued for offsets as an interim solution in transitioning from a high-carbon to a low-carbon economy. With a view that CO2 emissions are global and thus uniform, there is no difference where the emission reduction takes place. The effect is the same -- i.e. When emissions are reduced that contributes to a drop overall in greenhouse gases.

In addition, she said, offsets can be a very cost effective tool to meet compliance obligations by investing in emission reduction projects where there is more "low hanging fruit" and it is cheaper to pursue such efforts.

The panelists agreed that economywide cap-and-trade is needed for the power sector, since utilities have already taken advantage of low-hanging fruit options and now the costs are much higher. By allowing market mechanisms to prevail (cap-and-trade), instead of leaving emission reductions to a top-down approach (EPA regulation), the industry will achieve the emission reductions in the most cost-effective way, the group concluded.


Luca Nencetti (left) is director of engineering, Kasia Duda (right) is an associate and Yuan Fang is an intern at Carbon Credit Capital LLC.

Articles, analyses and resource material about the Climate Week NYºC 2010 conference, which ran September 20 through 26, are available at: www.greenbiz.com/topic/climate-week-nyc-2010. For more information, visit www.climateweeknyc.org.

Cap-and-Trade in Washington State by 2012? Maybe Not

What’s the Status of Law Suits in the U.S. on Climate Change?

REDD in the USA: Feds Grapple with Forest Carbon Offsets