The SunChips Bag: A Cautionary Tale

The SunChips Bag: A Cautionary Tale

I, for one, liked the SunChips bag. I wasn’t annoyed by the sound; found it quite endearing, actually.

Maybe it’s because, as a marketer, I thought the idea was spot on -- especially when compared to the original green campaign SunChips launched a couple of years ago, touting that the chips were “made from the power of the sun,” despite Frito-Lay having only a very limited amount of solar generation on their manufacturing facilities. They bought carbon offsets, but to a mainstream consumer, that’s meaningless.

The compostable bag, on the other hand, spoke directly to a stated consumer desire:

For the last two years in our Eco Pulse study consumers have said they would prefer compostable/biodegradable packaging to any other kind -- recycled, recyclable, etc. (See chart below.) It was a clear differentiator, something distinct and easy for a consumer to understand in a world of fuzzy, same-old, green claims.

And the TV spot was spot-on as well: It appealed to both the emotional and rational sides of our brains perfectly, which is the secret to actually doing good advertising in the green space (or any space, for that matter).

So what went wrong?  With 65 percent of the population looking for greener products and 42 percent stating they would prefer to see “made to naturally biodegrade” on a package, why didn’t this terrific innovation succeed?

Because mainstream American consumers value their personal comfort more than they value the environment.

A loud SunChips bag flies in the face of our desire for comfort. We want the cool, compostable packaging, but we want it to sound, look and feel exactly like what we’re used to.

In short, we want it to be easy to be green, and often it’s not. It’s loud. 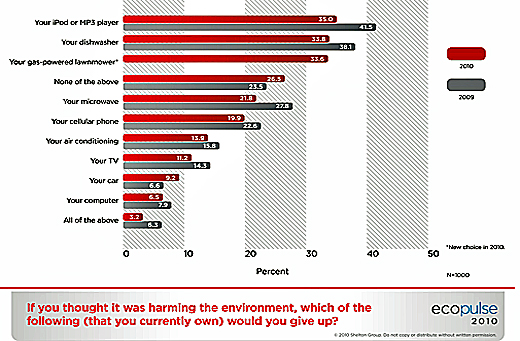 Suzanne C. Shelton is founder, president and CEO of Shelton Group, an advertising agency focused exclusively on motivating mainstream consumers to make sustainable choices. The original version of her post appeared on the Shelton Group blog and is reprinted with permission.

Pepsi's biodegradable backlash: The snack bag that was too noisy

Green Marketing: A Two-Fold Lesson in Perception and Reality

SunChips' Green Packaging Comes Under Fire for Creating a Racket