About 1,800 companies and organizations are vying for attendees' attention in the sprawling hall housing this year's Greenbuild Expo, the trade show of the U.S. Green Building Council's annual conference.

The booth bait includes a soaring scale model of the Empire State Building, which Serious Materials -- a project partner in the recently completed retrofit of the New York landmark -- brought to the exhibit floor of Chicago's McCormick Place West.

Shaw Industries Inc., YKK and chemical company BASF are among the firms offering an iPad -- the most coveted door prize this year -- as the top reward for participating in various audience engagement exercises.

As is typical at trade shows, firms with products and services on display try to top their previous year's exhibits and scotch rivals' efforts to lure foot traffic. At the Greenbuild Expo, there's a science-fair-on-steroids atmosphere as companies showcase their latest offerings and applications of eco-friendly solutions for the built environment.

Earlier this month, Serious Materials CEO Kevin Surace hinted that the firm's expo display would be something "really big." "You won't be able to miss it," he told GreenerBuildings.com.

Mounted on a 4-foot-high base, the 16-foot-tall replica of the Empire State Building is an eye-catcher in the showroom that stretches over 179,000 square feet. Greg Chann, Joseph Puma and Joseph Verni of SuperModel Productions said the scale model (one eighth inch equals a foot) took them about two months to build and traveled to Greenbuild in four large pieces. 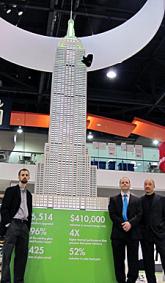 The model, its glowing green LEDs shining in the top floors and the spire, and a stuffed toy gorilla wearing a miniature Serious Materials T-shirt can be seen from much of the exhibit hall and provides a handy landmark. Up close, visitors can see the Serious Materials logo that was painstakingly placed on each of the 6, 514 windows in the model -- the exact number of double-hung windows that Serious Materials upgraded for the ESB retrofit.

The project -- with partners that included building owner Tony Malkin, Johnson Controls Inc., Jones Lang LaSalle, the Clinton Climate Initiative and the Rocky Mountain Institute -- was completed in September. It was expected to take nine months; Serious Materials got it done in six.

The company says the retrofit:

The firm also introduced a new product at Greenbuild, displayed its new energy management software-as-a-service -- called SeriousEnergy -- for the first time, and brought other products to the tradeshow. (Look for more coverage later on GreenerBuildings.com about the companies and products mentioned in this post.)

Other heavy draws on the showroom floor include the companies giving away iPads.

BASF is conducting a gameshow-like competition -- the BASF Challenge -- complete with contestant consoles and a video screen that flashes questions about green building factoids (i.e. What does the acronym ASHRAE stand for?)

YKK AP, which is featuring three new YKK AP enerGfacade products, is offering an iPad to the lucky expo attendee spotted wearing a YKK AP pin, when YKK team members periodically walk through the tradeshow. The giveaway highlights the company's new free iPad app, which serves as a compendium of information about enerGfacade products, their performance specs, and how to pair the YKK AP window frame, door frame and curtain wall systems with a specific type of glass to produce a specific level of efficiency performance.

Shaw is offering two major incentives for people who tell the company why sustainability is personal them.

People who respond to query using twitter.com/shawgreenedge and tag it #shawgreenedge will prompt Shaw to donate $1 to Make It Right. Shaw is sponsoring an event this morning honoring the Make Right Foundation and the project partners who are helping to rebuild the Hurricane Katrina-devastated Lower 9th Ward in New Orleans.

At the expo, attendees who answer a short questionnaire on the subject of sustainability and how it touches them are eligible to win an ipad.

Shaw also is donating carpeting for the 150 homes planned by Make It Right and, for a second year, has donated the green-hued carpeting (this year's color is called Willow) that stretches through the Greenbuild expo. With signs reading, "The carpet you're walking on will one day be recycled into new carpet," Shaw placards urge attendees to "Go ahead walk all over us."

And when people want to rest, they can do that thanks to two other sponsors: Jones Lang LaSalle is providing the Social Networking Garden, just outside the expo, and Herman Miller is sponsoring chairs and other furniture for in the conference press room, a VIP lounge and in an alcove in the convention area.

At the Andersen Windows Inc. booth, University of Chicago Velo Club members are sitting -- and pedaling -- in four-hour shifts to power the 11 9-watt CFLs -- on the company's display board. Nothing else in the booth uses electricity, said Andersen's Annette Panning.

Cyclists Davis Moravec and Themis Mavrogordatos (Moravec was cycling when I visited the booth and Mavrogordatos was waiting for his turn on the bike) said as many as 50 club members will help power the Andersen booth. The two calculated that each rider would about 15 miles an hour to keep the people-powered electrical system running though the expo, which concludes tonight.

Greenbuild 2009: Conference Opens the Doors to Its Largest Expo Yet

Project FROG and YKK AP Team Up on Net-Zero Buildings