View from the C-Suite

Virgin America is a San Francisco-based airline that is on a mission to "make flying good again." The airline launched in 2007 and operates in the United States and Canada and will soon launch service to Mexico.

Although it is the brainchild of Sir Richard Branson and licenses the name from the Virgin Group, by U.S. law it is only 25 percent owned by its European-based parent company. In 2009, at the close of its second full year, the company reported revenues of $548 million.

Virgin America's goal is to build an airline from the ground up that makes environmentally sustainable practices part and parcel of their business model -- right down to the use of organic hand-soap in the lavatories. The GreenBiz Group's Heather King talks with CEO David Cush about the imperatives for greening the airline industry, Sir Richard Branson's impact, and how algae-based fuels could reduce the industry's petroleum demand by 25 percent within 10-15 years.

Heather King: Virgin Airlines is "leading the airline industry towards a more sustainable future by collaborating with industry leaders, policy makers and other stakeholders to embrace progressive approaches and technological advances." What is driving Sir Richard Branson and Virgin America, as the U.S. partner, to take such a leadership role? 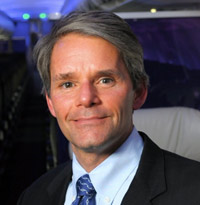 David Cush: There are multiple reasons we are leading this charge. We are based in San Francisco, a region that has a high sensitivity to green and sustainability issues. We have a young employee base; they are more fervent about climate change and more demanding that their employers play a positive role.

We operate a carbon-intensive business in a carbon-intensive industry in a world that must become carbon constrained. For that reason, our industry has to drive a solution or we'll become a pariah. Lastly, many of our corporate customers like Motorola and IBM are pushing the airlines in this direction as part of their effort to reduce their own carbon footprints. We are impacted by their supply chain mandates.

Sir Richard's commitment to carbon reductions has a significant impact on us. He sets an expectation that becomes our standard. He's basically thrown down the gauntlet and it's critical we deliver for our reputation and his.

HK: With regard to sustainability, your airline is working a number of fronts. You offer carbon offsets; work with traffic controllers on more efficient routing and partner with the manufacturers on designing aircraft to reduce fuel consumption. Which efforts have been most successful to date and why?

DC: The two things that have yielded greatest impact for Virgin America are improvements in navigation and the physical efficiencies of our aircraft. The FAA has been a terrific partner in developing more advanced navigation routes, both on the ground and in the air. We will see a 2-3 percent reduction in fuel use next year simply because of better routing. In addition, as a newer airline, we have the advantage of a brand new fleet. The carbon footprint of our 150 passenger jet is half that of many smaller 37-passenger planes.

HK: Virgin Airlines has pioneered biofuels for jet use. What is the current status of this effort? How much petroleum use might you truly replace?

DC: Our focus is on algae-based fuels. The science is there, thanks largely to the U.S. military. Once the military recognized the need for fuel options to support their very large needs, they really drove the science. What we need now is the investment for mass production and policy support. The airline industries CEOs have stated an intention to source 25 percent of their fuel need from biofuel in the next 10-15 years. Frankly, it will be an easier win to get the airlines to adopt biofuels than the consumer. The reason is that fueling aircraft is a more centralized function. We could have a significant impact on our overall fuel demand faster and more cost effectively.

HK: Several years ago, Virgin organized a cross-industry forum to help tackle climate change issues. What have you learned about working cross industry and with policy makers?

DC: Our ability to cooperate across industry is very problem specific. In some cases, like our work on re-routing, there is broad consensus and we have had a lot of success. In other cases, such as re-structuring the mix of aircraft to favor the more efficient modern fleets, we do not have consensus. For many airlines the economic hurdles involved in retiring or reworking aircraft present a major challenge.

HK: Already in your first several years, Virgin America has had a big impact on the domestic airline industry in terms of sustainability and flying experience. What are your priorities looking ahead?

DC: With regard to delivering on our sustainability promise, I have two priorities. First, we want to operate our aircraft much more efficiently. We are working with Airbus on the design of planes that will deliver 20 percent improvements in fuel use by 2016. This is the sexy side of what we are doing.

My second priority is onboard recycling. It is my personal pet peeve that our caterers recycle so little. If we are managing to do it in the terminals, I know we can do it on board. We are actively working with our suppliers on this issue. We have a high standard for our administrative offices, our terminals and our aircraft. For example, we use Method cleaning products throughout our operations because we feel they do the job and are environmentally sound. We want the same equal standard for recycling.

HK: How does Virgin view air travel in a carbon-constrained world? Some argue that we should limit air travel because of its contribution to greenhouse gas emissions. Have you considered ancillary businesses such as video conferencing services to reduce the need for travel?

DC: The Virgin Group encompasses a broad range of ventures. They have over 250 companies worldwide that cross mobile technology, media and more. For the parent company, high-speed rail travel is one of the big aspirations.

That said, for us and for our parent company aviation is an important business. It is also important for global commerce and for international relations. Video conferencing is a complementary technology. In our view, nothing replaces a handshake or a face-to-face meeting to seal a business deal or a treaty.

Virgin CEO Josh Bayliss: 'Every one of us should think hard about whether we need to take a flight'

Aviation, the Environment and the Value of Anticipation

Can Airlines Actually Reduce Their Emissions?