"The Power of One" is a series of stories about people who have made their companies more sustainable. (See yesterday's story on UL Environment.) They can't do it alone, of course. But by coming up with a good idea, enlisting the help of others and making persuasive arguments, one person can change a company and, sometimes, more. That may require thinking outside the box; today's story, about Karenina Susilo of eBay, is instead about thinking about a box.

During her five years working at eBay, Karenina Susilo has spent a lot of time staring at screens. Karenina, who is 33, is a designer and an expert on user experiences -- her Masters degree from Stanford is in learning, design and technology, and she worked at Yahoo! before joining eBay in 2005. Her job is to help make it easier, more convenient and more fun for eBay's users to do whatever it is they want to do when they come to the site. 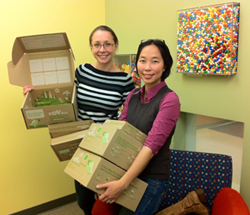 You might think that working in software is pretty cool, and it is. But when people do it day in and day out, some of them evidently get the urge to work with real stuff -- something you can hold in your hand. So, at least, says Karenina, who with her colleagues has spent a good bit lately working on a box.

"The idea of working on something tangible was pretty cool," she says. People got excited about it."

Maybe that's because this was no ordinary box. Karenina and a group of software designers -- who eventually joined forces with dozens of other people across eBay -- came up with a durable, environmentally friendly shipping box. 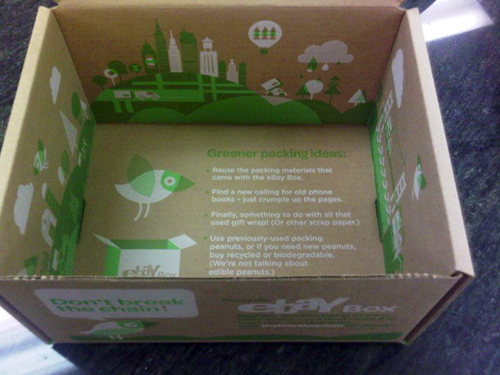 What's most interesting about this story, though, is how eBay, as a company, made it relatively easy for Karenina to get outside the box of her regular job. Every year, eBay sponsors an event known as the Innovation Expo. It's a science fair for grownups -- employees bring their best ideas to eBay's Whitman campus in San Jose, where they are examined by judges who include senior execs at the company, including founder Pierre Omidyar and CEO John Donahoe. The winning entry gets a $10,000 prize. Last year's expo featured an additional $5,000 prize for an idea that promoted sustainability. The March event generated 81 entries, including the box.

Karenina came up with her idea at an off-site meeting held by her group of software people aimed at improving the eBay user experience. Somehow the conversation turned to shipping. "There's millions of transaction on eBay, weekly, and items obviously get shipped in boxes," she says. "Some of them get reused but many don't." Her manager gave her time away from her regular job to pursue the idea of a reusable box, and eventually she drafted a team of nine others to work with her. They shared the $15,000 in prize money.

After the expo, Lorin May, a senior manager for environment at eBay, joined with Karen to lead the box project. Lorin, who's 30, has an MBA from Berkeley and did a stint at Net Impact as an AmeriCorps volunteer before joining eBay in January 2009. Because she's worked on a variety of "green" projects at the company, she's gotten to know people across eBay's various units; getting the box designed and approved required cooperation from people in shipping, procurement, the team that works with eBay sellers, the eBay bucks team, etc. To finance the project, Lorin and Karenina secured budget from four divisions--the green team, user experience, eBay bucks and shipping. About 55 people worked on the project, Lorin told me; she knows that because they were all invited to a recent launch party.

The eBay Box was introduced last month. It's a pilot program that may (or may not) be continued, depending on user response. About 100,000 have been distributed to eBay sellers. One business objective of the box project is to turn more buyers into sellers -- notice that there's a message on the box (below) that says:

Now that you've got what you wanted, sell what you don't and make some extra cash.

Clever, no? The boxes were snapped up almost immediately by sellers, and an eBay blog post on the topic has received more than 500 comments, suggesting that eBay users are engaged by the idea. They can be further engaged by tracking the progress on any given box online, or inside the box itself. 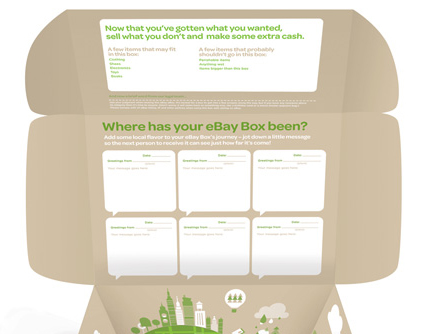 My takeaway from this story? First, that eBay has through the Innovation Expo created a valuable forum that invites its people to come up with new ideas. Second, that by having a formal green team, the company has institutionalized support for environmental initiatives. And third, and most important, that this "green" initiative became real not merely because it was good for the planet but because it could be tied to a couple of business objectives -- the opportunity to convert more eBay buyers into sellers by making shipping easier, and the chance to underscore the company's brand.

Tomorrow's Power of One story is about an invention that is making its way from one man's garage into American's largest railroad, the Union Pacific.

The View from the C-Suite: eBay CEO John Donahoe