I have been tracking the green stimulus spending since June 2009.

In November 2009, actual dollars spent on green projects was $1.5 billion.

Now, in November 2010, dollars actually paid to date on green projects is approximately $11 billion. It amounts to approximately 7% of contract spending from the Stimulus bill (which does not include tax benefits), and 2.6% of the total stimulus money paid to date.

By agency, the spending on green breaks out as follows:

I used the same methodology as described in detail here. If you are a data geek like me, you can do your own number crunching at Recovery.gov and the agency recovery sites who do weekly reporting in Excel on the allocation and spending of the stimulus money.  There is a wealth of information available, and I welcome any input or different statistical or mathematical analyses from the Green Building Law Community.

So the question becomes: what is the value of the 3% of the stimulus that went to green iniatives, and was the return on investment higher or lower than the other initiatives that were funded by the stimulus.  The answer is yes. 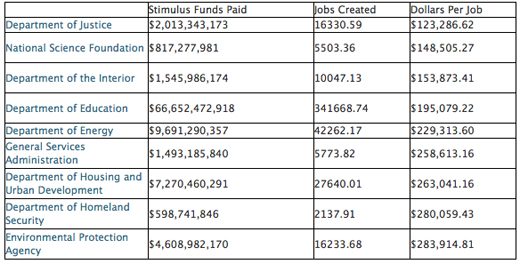 By contrast, the two departments which spent the most money, the Department of the Treasury (tax cuts) and the Social Security Administration only created 188 direct jobs.

It will be argued that the tax cuts, etc. indirectly created jobs by pumping more money into the economy.  But there is a direct way to measure the impact of a single green dollar.  To address this, I looked at the statistics for the GSA.  Unlike other agencies which allocate money through states to programs or disperse it to individual taxpayers, the GSA contracts directly with builders and other direct contract fund recipients to build or renovate federal buildings.

Do not fall into this statistical trap "$258k per job? We could have created five $50k jobs for that money!"  Remember, this dollars per job includes materials and costs of the jobs involved (bricks, mortar, etc.), which also have downstream job creating effects (brick makers, concrete haulers, etc.).

This post originally appeared on the Green Building Law Blog and is reprinted with permission.

Getting Up to Speed on GSA's Green Stimulus