WWF Takes Your 'Please Don't Print' Request to the Next Level

WWF Takes Your 'Please Don't Print' Request to the Next Level

We've all see those "Please consider the environment before printing this message" notes at the bottom of our emails -- and I for one am kind of baffled by people who do regularly print emails, although it must still happen. But late last month, the World Wildlife Foundation unveiled a project that takes the passive shaming of those emails to the next level.

The WWF released its very own file format: The WWF (of course). A variation on the ubiquitous PDF, .wwf files simply can't be printed.

From the home page of the .wwf file format:

Every day, entire forests are cut down to make paper. Paper that's senselessly used to print out documents all over the world: websites, emails, even entire books, in spite of the fact that it's easy to avoid printing by saving the document as a PDF. But even PDFs can sometimes also be printed out. So to stop unnecessary printing and encourage a new awareness about the use of paper, we've developed a new, green file format: WWF. A format that can't be printed out. A simple idea that saves trees. Join in. Decide for yourself which of your documents don't need printing -- and save them as WWF.

The format is only available in MacOS at this point (a Windows version is coming soon), but that only makes sense. Apple built their printing protocol off of Adobe's PDF format, so essentially since OSX first came out, Apple users have had the ability to "print" a PDF of documents rather than actually print them.

WWF files just take away one level of features, disabling the print option entirely, but it works in the same was as Apple's "Save as PDF" function works. 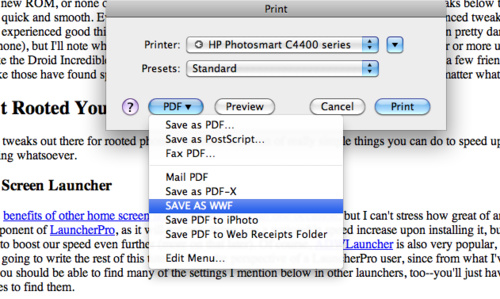 It's a reasonable idea, but because (at least as of this writing), .wwf files can't be opened by Preview, Apple's default (and small, processor-light) PDF reader, WWF files don't really make my life any easier.

But as a statement, and perhaps coupled with the Eco-Font, .wwf files could make a big difference, especially once it's ported to Windows and if/when companies make it a mandatory or preferred file format instead of PDFs.

Below is a short video from the WWF about the .wwf. What do you think? Are you a habitual document-printer who needs some kind of handcuff to keep you from printing? Or, even worse, are your coworkers habitual paper-wasters, and will this work to stop them? Let us know in the comments below the video.

Can Green IT Be as Simple as Changing Your Font?

Forget the paperless office: Here's how to get a less-paper office