When trying to save the planet, every litter bit helps.

But let’s not lose sight of the forest when we’re saving a tree, or when General Motors is recycling “plastic boom material used to soak up oil in the Gulf of Mexico” into auto parts in the Chevrolet Volt.

Recycling is laudable — indeed, it points the way to a sustainable, zero-waste future where nothing is thrown away and everything is made into something else. The Chevy Volt, meanwhile, is an innovative and efficient car — the “car of the year,” according to Motor Trend. So the people at GM deserve kudos for developing the car and, now, for turning waste into auto parts, as illustrated in the photo below, which shows some of the materials that go into “underhood parts” of the car: 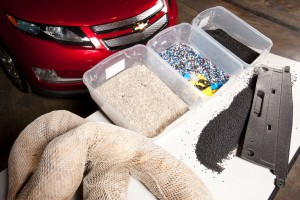 Nor is this effort to reuse and recycle an isolated effort. Just last week, GM reported that more than half of its 145 plants worldwide are now “landfill free,” meaning their waste gets reused, recycled or converted into energy. Those plants employ more than 70,000 people, all of whom, presumably, are learning that it’s possible to reduce and reuse waste.

What’s more, GM last month announced that it was adding 1,000 jobs in Michigan to develop more hybrid and electric cars similar to the Volt, said The New York Times. GM’s chief executive, Daniel Akerson, said then that “electrification is critical to the global automotive industry.”

But a little perspective is required.

In an op-ed titled “A Green Detroit? No, a Guzzling One” in The New York Times last week, Edward Niedermeyer, who edits a website called The Truth About Cars, wrote:

At General Motors, sales of actual cars this year have fallen by nearly 6 percent compared with last year’s anemic numbers, while light trucks (which include pickup trucks, S.U.V.’s, minivans and crossovers) are up by more than 16 percent. Despite rolling out the much-hyped Cruze compact and the Volt plug-in hybrid, G.M. still sells half again as many trucks and S.U.V.’s as it does cars.

So much for President Obama’s pledge that the $80 billion bailout of GM and Chrysler would lead to “a new beginning for a great American industry,” as the automakers dedicate themselves to “manufacturing the fuel-efficient cars and trucks that will carry us toward an energy-independent future.”

Of course, Obama couldn’t make that pledge come true. Nor can Akerson. No one in Detroit can transform the auto industry. For the most part, that’s our job as car buyers. As Niedermeyer reports, sales of subcompact and compact cars are down across the industry this year, while pickup trucks and SUVs are selling briskly. SUVs are bad for the climate and good for the oil sheiks, but, sad to say, Americans love them.

Which isn’t to say that incremental changes like the ones that GM is touting don’t matter. They do. A giant company like GM can’t change overnight, or radically; it changes gradually, through initiatives like this one, even if their value is largely symbolic. Symbols matter.

“There’s nothing like this in our industry or any other industry we know of,” said Mike Robinson, GM’s v.p. of environment, energy and safety policy on a conference call with reporters. “Like everyone else watching the spill in the gulf, we wanted to do something to help if we could.” 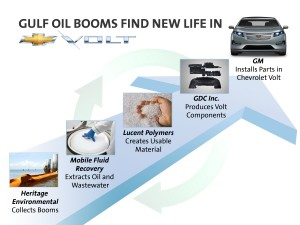 What GM did, with the help of its suppliers, is recover about 100 miles of plastic booms that were soaked with oils. About 100,000 pounds of waste was avoided by the recycling effort, Robinson said. The recycling effort will result in the production of about the same amount of plastic resin for vehicle components.

The parts, which deflect air around the vehicle’s radiator, are comprised of 25 percent boom material and 25 percent recycled tires from GM’s Milford Proving Ground vehicle test facility. The remaining is a mixture of post-consumer recycled plastics and other polymers.

…GM is dedicated to reducing its waste and pollutants, and recycles materials at every state of the product lifecycle. It uses recycled and renewable materials in its cars and trucks, which are at least 85 percent recyclable. Used tires, old plastic bottles, denim and nylon carpet are all redirected from landfills and reused in select GM vehicles.

It sounds like GM is doing its part. Now if only auto buyers would do theirs…