We recently surveyed the GreenBiz Intelligence Panel to find out what strategies their companies employ when responding to sustainability surveys. We found that while surveys may arrive from many sources, including customers, socially responsible investment groups, or those who rate and rank companies, a few trends are clear. According to our panel, there are too many surveys, they need to be standardized, and there's a frustrating lack of transparency in the different methodologies.

Our survey, conducted between November 17 and 24, garnered 290 responses, with 52 percent from companies with revenues of more than $1 billion (which we define as "large companies"). 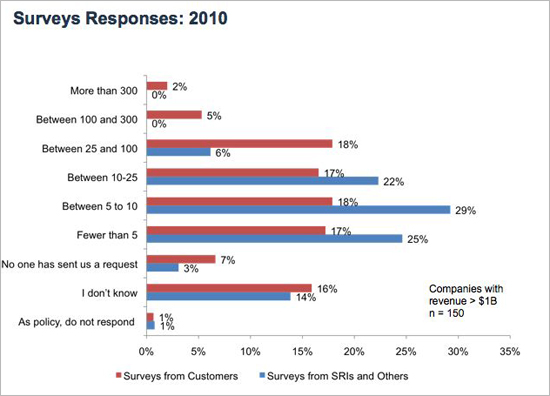 Customer surveys can be burdensome, with some large companies responding to more than 300 customer surveys each year. As one of our panel members noted "Customer surveys are the most important, but it would be of great value if industries, or consortia, or other groups would collaborate to create a shared survey. The range of questions (from "what is the weight of chemical x in your product" to "what have you learned from your sustainability program and what would you do differently") is mindboggling, and because they always require input from subject matter experts throughout the company, they can be very time-consuming to complete."

As time-consuming as customer surveys may be, they appear to be on the increase. While some have made news (see some of our coverage of P&G and Walmart scorecard announcements), 52 percent of the companies responding to our survey are currently sending questionnaires to their suppliers. According to our survey results, there is an exceptionally strong push by consumer products and technology companies to collect supplier data. But as one smaller company noted, "we spend nearly as much time responding to questions about our program as we do driving the program results." To characterize it another way, several of our survey respondents wondered if their customers are "checking a box" by sending these surveys or if it is truly being considered as an important criteria by their procurement group.

SRI and Other Independent Surveys -- Missing the Mark?

More than half the companies surveyed (54 percent) are filling out up to ten surveys from independent groups. The primary surveys companies are responding to include the Carbon Disclosure Project (CDP) Climate Change and Emissions survey, Newsweek's Green Rankings, and the Dow Jones Sustainability Index (DJSI). More than two-thirds of large companies respond to the CDP request, while slightly more than one half to the Newsweek request, and slightly less than half for the DJSI.

Our panelists noted flaws in these independent surveys. "The SRI surveys are based on policies not performance and distort the way our company engages in sustainability, giving us opportunities to be seen as a leader without changing our product." Another panelist went on to remark that "while we would all agree that sustainability should be fully integrated into ALL our business processes, many surveys (including DJSI) ask for a percentage of revenue devoted to sustainable initiatives. If you are doing it right, you shouldn't be able to break it out separately!"

One interesting finding of our research is that corporate strategies don't appear to be based upon their industry or even the longevity of a company's sustainability program. For many companies it is more a function of their corporate philosophy. As an example, when it comes to one industry's top five companies, two of them answer between 100 and 300 surveys while their biggest competitors answer between 10 and 25.

But whether they answer 5 or 300 survey requests, companies would like to see a standard established in the same way as there are GAAP rules for financial reporting. With that, there would likely be a consolidation of requests and hopefully greater transparency when it comes to the raters and their methodology.

The Effort Behind the Response

While companies may question the value of responding to stakeholder surveys, they still view them as a part of doing business. We asked our panel members who in their organization are answering these requests, how much time are they spending on them, and what tools are being used to keep all this information organized.

In terms of the individuals responding to these surveys, it should come as no surprise that the sustainability department leads the way with 66 percent of those in large companies identifying that group as being involved in their responses. But hidden in the numbers is the collaboration across the company to gather all the data to respond. This is also true in terms of the effort required.

When asked about the number of hours spent responding to surveys, several panel members pointed out that it was difficult to capture across all the business functions and divisions that provide input for both responding to surveys but also the development of their annual sustainability report. While a few large companies require a dedicated resource to answer these surveys, approximately a quarter of large firms (26 percent) spend fewer than 100 hours answering surveys and another 34 percent spend between 101 and 500 hours on these efforts.

When we asked what technology was being used, 53 percent indicated Excel spreadsheets and the second most noted technology (for 13 percent of those responding) was internally developed custom systems. While a number of software packages were mentioned, there is no clear market leader.

The Motivation to Respond

One of the primary reasons for our recent survey is to try to understand what companies expect from responding to these surveys. Of primary importance for large companies is to respond to customer interest and improve their overall brand recognition. The responses from smaller companies tell a slightly different story. While almost equal to large companies in terms of prioritizing responsiveness to customers, it is nearly as important for smaller companies to gain access to the results of the research being conducted. As a few panel members commented, they're looking for feedback and direction as a result of responding to these surveys. 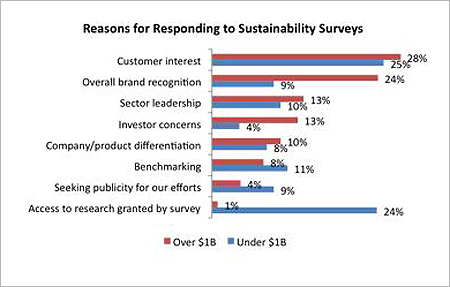 And this may be the most important insight concerning sustainability surveys. While the ratings and rankings are important, and some people's bonuses in part depend upon having a good showing, many of the companies indicated that they use some of these surveys to drive internal change. As one survey respondent noted, "it's easier to go to other executives and say this is what customers are asking about than it is to ask about it myself."

Survey of surveys 2012: Are companies just checking the box?

What's the value of surveys to companies? Just ask.

6 reasons to respond to the Dow Jones Sustainability Index survey