The Empire State Building, the focus of the largest green retrofit project in the U.S., has achieved another sustainability first: The iconic New York City high-rise has become biggest commercial purchaser of green power in town.

Malkin Holdings, the firm that supervises the landmark building, has signed a two-year contract with Green Mountain Energy for wind power renewable energy certificates. The purchase from Green Mountain's corporate parent, NRG Energy, will cover 100 percent of the electricity used at the 2.85-million-square-foot Empire State Building -- an arrangement that amounts to the equivalent of about 55 million kilowatt hours of renewable energy annually and will avoid almost 100 million pounds of carbon dioxide emissions a year, the parties announced this morning. 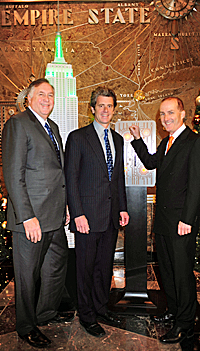 Green Mountain's contract with the Empire State Building grew out of a desire to get the best energy deal for the property -- rather than a specific search for green power, said Malkin, who was joined by Thomas and Crane in a phone interview with GreenBiz.com today.

"Everything that we're doing at the Empire State Building is about business and, bottom line, that's the first and most important thing," said Malkin. "We're not about paying more to do something qualitatively different, we're about market-ready solutions. We didn't know we were doing green power until the bid was won by Green Mountain."

The emergence of Green Mountain as the winning bidder supports efforts by the Empire State Building's owner to make it a showcase of energy efficiency, demonstrate that sustainability is good business and vice versa -- and develop a model for other large commercial buildings to do the same.

Malkin brought together Clinton Climate Initiative, Jones Lang LaSalle, Johnson Controls and Rocky Mountain Institute as partners in the project that has eight major components. One of them, the retrofit of 6,514 double-hung windows by the firm Serious Materials, was completed last September and became the centerpiece of an eye-catching display at the Greenbuild convention two months later.

The project partners have made their modeling, analysis and other material available to the public to encourage other commercial property owners to pursue similar efforts.

Executives at Green Mountain and NRG, which acquired Green Mountain for $350 million in cash last September, want their work with the Empire State Building also to serve as an example to property owners.

The contract with the Empire State Building is the latest boost for Green Mountain's presence in New York. The 13-year-old company came to New York City in November 2009 and has made inroads among commercial and residential customers. Its high-profile customers in NYC include the Trump SoHo hotel, the Sloan Kettering Cancer Center and the Archstone Apartments.

"I'm agnostic as to what comes into my distribution panels in my buildings," said Malkin. "The key, as far as I'm concerned, is what we're providing here is absolutely at market. Clean power won a contract against all other forms of power, and hopefully that catches the attention of the public."

More information about the Empire State Building and its sustainability effort is available at www.esbnyc.com/sustainability_energy_efficiency.asp

Top image courtesy of W&H Properties and inset courtesy of the Empire State Building Company, both supervised by Malkin Holdings.

Empire State Building to Become a Model of Energy Efficiency

Battling the Beast of Climate Change at the Empire State Building