The auto industry's fascination with electric vehicles has gone from a low hum to a steady buzz over the past year. This fall, small numbers of mainstream electric vehicles have started to be delivered, led by Nissan's battery-powered Leaf and GM's plug-in electric hybrid Volt.

At the Detroit Automotive Show this week, Ford unveiled a batch of electric vehicles, proving GM and Nissan aren't going to have the spotlight to themselves for very long. Longer term, news of Ford's emerging partnership with Best Buy and Microsoft offers a preview of how the emerging ecosystem of EV services consumers are going to encounter.

First, the cars. At center stage of Ford's debut is a battery-powered, four-door sedan, the Focus Electric (pictured above), due in 2011. Like the Leaf, the Focus Electric is predicted to be able to go around 100 miles per charge and is rumored to be priced around $30,000.

Ford also unveiled two other EVs due in 2012. The C-Max Energi, a five-passenger micro van that will be a plug-in hybrid that, like Chevy's Volt, can be recharged over night. While driving, it can run on battery mode until the battery is depleted, and then switches on a motor to extend its range.

Ford claimed both the Focus Electric and C-Max Energi will deliver better fuel economy than the Chevy Volt. According to EPA testing, the Volt delivers overall mileage of 60 mpg, comprised of the equivalent of 93 mpg in electric mode, before dropping to 37 mpg when its engine comes on.

The Energi's sibling, the C-Max Hybrid, has no plug. It works like one of the hybrids you can buy today -- the Ford Fusion or Toyota Prius -- boosting mileage by switching between gas engine, electric motors, and batteries to recapture the car's breaking energy. For now, pricing is unavailable for the C-Max models.

Ford also unveiled details of partnerships with Best Buy and Microsoft. The alliance is the most detailed vision of how the coming electric car era may be shaping up, and points to how EV manufacturers will align with utilities, consumer software brands, and electrical contractors to build out their systems. 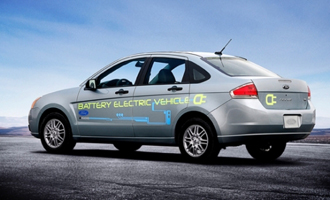 The deal with Best Buy will help consumers arrange the installation of at-home recharging stations that Ford's e-vehicles can hook up to. Meanwhile, Microsoft will provide software services to help drivers find charging stations, and help manage other car-functions.

This partnership paints in some details of how consumers will actually buy, set up and use EVs. Till now, EV makers have faced a chicken-and-egg problem. Building the cars is one thing, but getting the infrastructure in place to use them represents a challenge beyond the automakers' normal expertise. And before those charging networks exist, EV demand is likely to be slack.

The number of EVs rolling on US roads is rising quickly. A couple of years ago, the market was limited to specialists -- such as newcomers China's BYD, Better Place and Tesla. Far older major automakers are taking the lead in EVs.

In addition to the e-vehicles from Ford, GM, and Nissan, Toyota – the reigning sales champ of the hybrid electric market -- announced plans to extend its Prius brand into a family of hybrid vehicles, including a mass market plug-in hybrid.

For these global automakers, EVs have gone from small-volume sideshows to serious product lines. Consider Ford: All told it has sold over 140,000 hybrid vehicles to date, secondly to Toyota.

From none a decade ago, Ford's lineup electric models now totals seven: The Escape Hybrid SUV; Fusion Hybrid sedan; Transit Connect Electric battery-powered van; Focus Electric; C-Max Energi and Hybrid; and a new, as yet hush-hush hybrid model due in 2012.

Full disclosure: Ford Motor Co. paid for my travel and accommodations as part of its two-day "Driving Green Technology" event at the North American International Automotive Show. I wasn't compensated in any other manner for my time and the opinions posted here are my own.