A Photo Tour of Masdar City

A Photo Tour of Masdar City

This is a plaza in Masdar City, the new "green" city in Abu Dhabi, where I'm enjoying a pleasant, cooling breeze.

The breeze is generated by a wind tower, above, which is the centerpiece of the Masdar Institute, a graduate school devoted to sustainability that bills itself as "the Green University."

The tower isn't a wind turbine -- it doesn't have blades and or make electricity. Instead, it's a 147-foot tall structure that uses open and closed louvres and changing weather patterns to draw drafts down to the plaza, which otherwise would be unbearably hot in the summer. 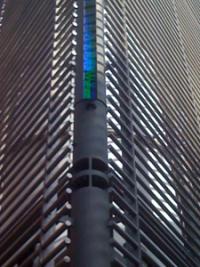 The tower is also an energy monitor, tracking usage in the student apartments that overlook the plaza. When the tower's LED beacon is blue, as it is here, efficiency standards are being met. When it's red, someone's AC is blasting.

"That's my guilt trip right there," says Martyn Potter, director of operations and facilities at Masdar City. "It's 45 meters tall."

Yesterday, traveling with a group of reporters, I took a tour of Masdar City -- the audacious, carbon-neutral, zero-waste $15 to $20-billion planned development rising out of the Arabian desert. About $2 billion has been spent so far, much on planning, design and infrastructure.

Announced in 2006, the project has been delayed and downsized by the global financial crisis. For now, it's barely a spech on the vast urban sprawl of Abu Dhabi -- six buildings, on a site no bigger than a couple of football fields. But there's enough experimentation going on at Masdar City so that it could -- could -- have implications for clean tech, renewable energy and urban design in the Middle East and elsewhere.

So please join me on my Masdar City tour, illustrated by iPhone images and a Flip movie...

Our day began with a ride on what is said to be the world's first trackless Personal Transportation System, or PRT. It was fun. We climbed into these little podlike four-seaters, press a button, and in theory they take you where you want to go -- although for the moment, the cars shuttle back and forth between two stops that are a mere 800 meters apart. They travel at about 25 kilometers (15 miles) an hour.

The cars are made by a Dutch company called, appropriately, 2GetThere, and they are guided by magnets below and fiber optics above. Right now, they operate underneath Masdar City but that's going to change. The costs of building the city on a 7.5 meter platform, which was part of the original plan, proved exorbitant, so now the city being brought down to earth -- literally and metaphorically.

Here's a look at the PRTs. Maha Matraji, a Masdar City project manager, explains how they work.

Next we strolled a few of the narrow streets of Masdar City. They're designed for comfort in the desert heat. Buildings shade one another. It's supposed to have the feel of an old Arab village, and it works for me. (I'm no architecture critic, but my maternal grandparents were born in Syria, so my roots are in the Middle East.) 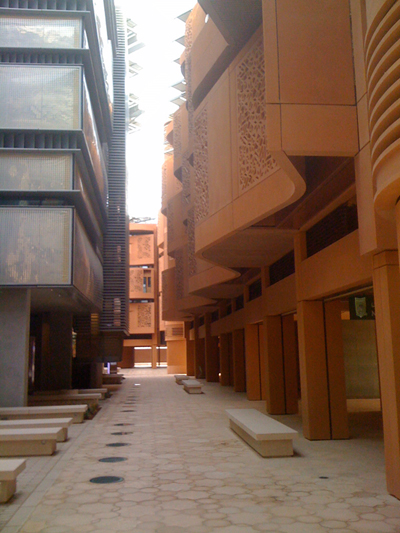 Windows of the Masdar Institute building are angled to allow light, but not heat, to penetrate.

So far, the only people living in Masdar City are about 167 students at the Masdar Institute. Tuition is free, and they all doing research on sustainability. MIT's a partner.

Only a handful of commercial businesses, including a bank and a sushi restaurant, have set up shop here. Of course the students need a place to take a coffee break.

The hot desert sun requires careful design and lots of energy devoted to cooling, but it's also the major source of electricity for Masdar City. This 10 megawatt array of solar photovoltaic panels is said to be the largest in the Middle East.

Roughly half of the panels use thin-film solar cells come from First Solar, an American firm, and the other half are conventional crystalline made by a Chinese manufacturer, Suntech.

"It's a strange idea, maybe, to combine those two technologies, but think of this as a pilot project, actually a rather large one," explains Dr. Afshin Afshari, manager of energy management for Masdar City. By comparing the two, Masdar will figure out which is most efficient.

To save water (and because labor is cheap here), all the panels are all cleaned manually, with brushes. For now, Masdar City is generating more electricity than it needs. The surplus is sold back to the grid.

A much, smaller experimental facility will generate power from concentrated solar power (CSP), meaning the heat rather than the light of the sun, is used to make electricity. Mirrors reflect the sun's heat up to a circular reflector at the top of the tower, which then concentrates the heat to boil a liquid. It's being managed by the students.

There's lots more going on at Masdar City. We met a professor who's researching ways to extract energy from wastewater. We saw a "Sopogy-Mirroxx-Broad double-effect absorption chiller" that uses a technology that I couldn't understand to turn solar-heated water into air-conditioning for offices. We heard about geothermal wells that have been drilled, also for AC.

My takeaway? I'm still not quite sure whether Masdar City is intended to be a big, viable, commercial business -- the plan calls for 40,000 people to live here and 50,000 commuters to work here -- or a largely symbolic effort, albeit one requiring vast expenditures, to build a combination theme park/living laboratory to showcase clean tech. I wonder whether the money being spent here will translate into practical learning with impact elsewhere. I wish there was more transparency around the project.

But -- finally -- I admire the ambition and commitment behind this 21st century vision of a green city rising out of the sands of Abu Dhabi.

[Disclosure: My travel to Abu Dhabi were paid by Masdar.]