More than 2 million tons of computers, laptops, cell phones and other electronic gadgets become obsolete in the U.S. each year, but only a fraction of that e-waste is recycled.

Despite the growth of takeback programs and e-waste recycling services, all too often consumers discard their old electronics or let them pile up in a dark corner of their homes or offices.

The problem is "the end of life process is incomplete," said Aaron Engel-Hall, a master's candidate in mechanical engineering at Stanford University. "There is a gap between consumer and recycler."

But what if people didn't have to haul their gadgets to an e-cycling center, or find a service to pick it up from them? What if they could do everything needed to make recycling possible at home?

A team of students from Stanford and Aalto University in Finland answered those questions by designing a prototype for a laptop that can be disassembled easily so the electronic components can go into an envelope for mailing to an e-cycling program and the rest can go into the household recycling bin. And all that can be done by hand in less than two minutes without any tools. (The laptop is pictured above and the images below show how it comes apart.)

Actually, disassembly can take as few as 45 seconds, said Engel-Hall, who was a member of the design team. "This laptop represents a new class of electronic products,"  he said. "You can disassemble this on your couch. In 10 steps. With no tools." 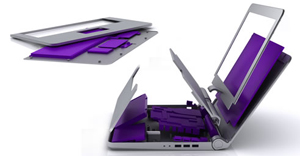 Engel-Hall talked about the project last week at Autodesk's Sustainability Summit in San Francisco, where the company showcased the latest additions to its lines of design software and prominent applications of its tools -- such as the design of the NASA Ames Sustainability Base that's scheduled to open in May, the electric bike PiCycle that's getting a lot of buzz, and the recyclable laptop.

Engel-Hall and his two classmates in Stanford’s ME310 course made up the U.S component of the eight-member team. In the course, students from Stanford and other universities collaborate on design challenges posed by global companies. The Stanford-Aalto team’s challenge to design a fully recyclable consumer electronic device came from Autodesk, which provided the funding to support the team’s work as well as design software. (As part of its education program, Autodesk provides its software free to students.)

The team had nine months to research, design and prototype their project and used Autodesk Inventor 3D mechanical design software and Autodesk Inventor Publisher to do it. The tools were invaluable in creating 3D prototypes and animated displays as the team explored ideas, considered materials, worked through various design problems and iterations, and created presentations of their project, Engel-Hall said.

Devices are often designed with the look and feel of its shell first in mind. But the Stanford-Aalto team team started from the inside, looking first at the electronics needed for a laptop and designing around those components to make the device easy to take apart for recycling, Engel-Hall said.

The goal influenced every aspect of their work from the modular design and choice of materials to the enhanced functionality of the device. For example, the keyboard and track pad slide out of the laptop as a single unit, providing a wireless keyboard (pictured above).

The project also drove home a very important lesson in marketing. "We had to design the product to be green as a byproduct," Engel-Hall said of the phrase that became the group's mantra. "Cool, sleek and sexy" attributes are more appealing to prospective users when it comes to laptops and other electronics, so when team members talked about their device, the enhanced features were the first things they'd mention," said Engel-Hall. "Look it's wireless and it's recyclable as well," he said, demonstrating the team's approach.

The team calls its creation the Bloom Laptop, a name that reflects some of the group's early ideas for a product. They included a hand-held device embedded with a bamboo seed (watering the device would make the seed grow and the growth process would break apart the gadget, readying it for recycling) and another hand-held product, whose parts could be fanned out like the petals of a flower for disassembly, Engel-Hall said.

While the team members loved the concepts, their research showed that no one else seemed to. They discarded the ideas, "but we retained the name," said Engel-Hall.

Here is a video about the Bloom Laptop.

Images and video courtesy of Autodesk.

More on e-waste and other sustainability indicators is available in GreenBiz Group's State of Green Business Report 2011.  Download the free report from GreenBiz.com

E-Waste Roundup: The Trouble with Exports, Easy Recycling, and More...