The Blend of Judo & Kabuki That's Driving Sustainability at GSA

As a crucial part of his ambitious goal to turn the federal government into a leader in green practices, President Obama has turned to an unexpected resource to help drive the effort: the government's purchasing and property arm, the General Services Administration. 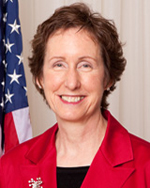 The GSA's administrator, Martha Johnson, was picked to lead this mission as head of the giant agency last February. Speaking at the State of Green Business Forum in Washington, D.C. yesterday, Johnson asserted that the twin challenges of fiscal pressure and sustainability goals are perfectly matched to create change at an organization better known for its role as buying agent for some $90 billion worth of government materials and manager of half a million federal buildings.

"One of the things about sustainability in government which is so beautiful is… it talks about 'no waste'," Johnson said. Focusing on sustainability reframes the discussion away from negative connotations of cost cutting towards positive attitudes about constructive change.

"The government has a choice," she added. "We are either under this screw of cutting costs, or we can judo it and say: Let's be about sustainability, less waste in the system, and more intelligent use of resources. It really changes about how we think about tax payer dollar. That is a huge shift."

Mere months after entering office, Johnson and her leadership team unveiled a goal of reducing the agency's environmental footprint to zero. It's a vision that wowed many, and mystified some, in the green community, given its audacious scope and the uncertainty of just how to achieve it.

Yet for Johnson, it's the sort of "stretch goal" that the agency is ready for. "Of course we don't know how to get to zero environmental footprint," said Johnson. "If you knew how to do it, you should be doing it already."

Big goals inspire staff and animate new thinking about old ways of operating, she added: "It's very much like President Kennedy talking about the moonshot. I don't mean to be grandiose or anything, but that's helpful."

With a background in the private sector heavy with "organizational transformation" experience, Johnson regards greening the GSA as serious challenge that can help lead practices elsewhere in the economy.

In the past, huge goals have acted as pole stars, inspiring change and spreading from industry to industry, such as "total quality" or "total safety." "That north star notion," she said, "That's what zero environmental footprint is about."

Steps toward this goal are multiplying across the agency's operations. As part of the Recovery Act, for example, the agency was awarded $5 billion to retrofit federal buildings with greener technology.

One of the trophy projects of this effort, Johnson explained, is a nearly century-old federal building in Grand Junction, Colo. Unveiled this month, a renovation converted this building into the first net-zero energy building on the national registry, Johnson explained. A combination of geothermal, solar, and smart building systems help the building generate more energy than it uses over the course of a year.

In December, the agency upped the ante on its green building requirements, requiring that all newly federal buildings, as well as major renovations, meet LEED Gold standard.

The agency is also working to help its vendors develop their abilities to track and improve their environmental performance. The GSA is focusing on small businesses, setting up a pilot project to help 80 or so companies develop processes and technology to track their emissions. "Greenhouse gas tracking is one way industry can demonstrate they're responsible energy consumers," said Johnson.

Much as the agency is known for its purchasing power, and building portfolio, it also manages an enormous flow of government waste, including everything from retired computers to whole buildings.

"E-waste is a real conundrum," said Johnson. "We dispose for the government. We have two huge disposal units: one for real estate, the other for all the other stuff... If we [dispose of] 10,000 computers per week, where do they go?"

With a nod to William McDonough, who spoke after her at the forum, Johnson offered that there's an opportunity to unite the GSA's highly regarded building design unit with its disposal operations, to encourage holistic design thinking. "That would be interesting to see how they influence each other," she said.

Speaking of McDonough's influence, Johnson acknowledged that the evolution of green practices is a two-way street. As much as she hopes the GSA can set new standards that entice vendors and partners to evolve, the private sector is a constant source of innovation for the GSA.

But as a public entity, the GSA has an obligation to maintain fairness in commercial relationships. "Fairness and innovation is an interesting thing," she laughed, implying that picking the best and most innovative solution from a pool of bidders can be at tension with policies about fairness in sourcing.

"In terms of how industry can talk to us about products and services, we have to operate under very careful protocols so we don't lean towards particular companies," said Johnson. "It's an interesting kabuki."

Can the GSA Really Achieve a 'Zero Environmental Footprint'?

Getting Up to Speed on GSA's Green Stimulus