It’s that time of year again; time for the second annual Tommies, my 2010 kudos to the most impressive of recent bio-inspired designs or discoveries. As always, I will arrange the awards by the creatures that inspired the innovations, and invite any of the discoverers to have an Irish coffee with me at the Buena Vista in San Francisco.

1. The tardigrade, or water bear, was the inspiration for Biomatrica’s method of preservation without refrigeration. This tiny, common invertebrate can be found in the soil of your front lawn or the waters of the Arctic Ocean, and is one of the more fascinating animals in our world. It depends on a surrounding film of water for gas exchange and to avoid drying out. It can stand extremes of temperature from -80 degrees C  to over +80 degrees C, pressures 6,000 times greater than our deepest ocean trench or the vacuum of space, and about 500 times the radiation it would take to kill us.

Should the tardigrade dry out, it can lapse into a state of crytobiosis, or suspended animation, for as much as 120 years and emerge quite alive after the addition of water.

This process of anhydrobiosis, or life without water, was studied by Biomatrica president and founder Rolf Muller and applied to the preservation of laboratory samples. The company claims that tissue, cells and biopsies can be stored without damage and without the long term risk and cost of refrigeration. Each sample is wrapped in a thermo-stable, synthetic film that mimicks the chemistry of the tardigrade. When needed the sample can be rehydrated without loss of vitality (tissue, cell or DNA damage).

The implications of this innovation go well beyond laboratory sample storage and could be a tremendous help in the global public health effort, where vaccines, samples and supplies often are not delivered to patients because of a lack of refrigeration. 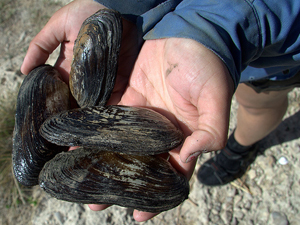 2. The mussel has, for many years, been the poster-child-in-waiting for the bio-inspired design community, and it appears that this bivalve will be coming out of its shell in the near future. Mussel byssus is well-known for its ability to adhere to rocks in the turbulent intertidal zone and many teams of scientists have been studying the proteins that make up these anchor threads. Why? It is because the mussel is able to produce this strong adhesive underwater, at ambient temperatures and with no toxic byproducts. Moreover, the creature can fine-tune this adhesive for a whole range of performance and relative permanence.

Now scientists at the University of Chicago have applied for a patent for a synthetic version of mussel glue, an adhesive, self-healing gel. The potential remains exciting; biomedical transplants and repairs along with underwater mechanical engineering remain the chief areas where this material will have a significant impact. The innovation illustrates how important cross-collaboration over years of research can be.

Key to their breakthrough was using metal ions for molecular bonding rather than the typical permanent covalent bonding in most synthetic polymers. Other synthetic polymers had not performed well for both strength and ductility in the past: The tightly bonded  material became too brittle as it was strengthened. As any structural engineer knows, a part of a bridge that is too strong can weaken the whole structure as much as a weak part. Changing the pH of the material also enabled them to change its properties.

What are the bio-innovation concepts here? Strength from shape, in this case at the molecular scale, and solving contradictions, in this case by changing the dominant parameters of the problem. 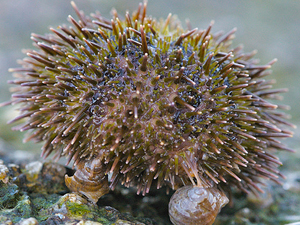 3. The sea urchin is also an amazing creature from the intertidal zone and literally chews on rock to make its living, grazing across the litho surface and carving out shallow pits to anchor itself. Pupa Gilbert, a physics professor from University of Wisconsin-Madison discovered that, surprisingly, tooth breakage is what makes their dentition so effective.

Its tooth material is a biomineral mosaic composed of calcite crystals with two forms — plates and fibers — arranged crosswise and cemented together with super-hard calcite nanocement. Between the crystals are layers of organic materials. Since the organic layers are softer than the crystals, they break first and fail in a plane that guarantees optimum sharpness. It’s a bit like breaking off the scored bits of your razor knife as they dull, but on a much smaller and more integrated scale. Self-sharpening tools based on this kind of material logic will indeed be a boon. The bio-design concepts here are the use of composites to solve performance contradictions, controlled failure of parts for optimum success of the system (do autumn leaves come to mind?), and functionally graded material formed from a few basic components.

4. The elephant is the earth’s largest land animal, stumping its tons across varied landscapes. Almost comically contrapuntal to its lumbering frame is its ultra-dexterous and delicate trunk. Festo, the automation company, has added the elephant to the list of their animal inspirations, this time for a robotic arm. With nearly unlimited degrees of freedom of movement, trunks, tails and cylindrical bodies have been employed successfully for millions of years of reaching, grabbing and holding on. This product may represent a market trend toward more “softbots,” as performance capacity and expertise has grown in  robotic research facilities.

5. The Homo sapien, or, more precisely, his skull anatomy, was the inspiration for an innovative helmet design from Lazer, the Belgian helmet manufacturer. Next time you get a scalp massage, you may appreciate the concept that is key to the innovation. Your scalp moves across your bony skull, of course, and, in this ability is part of a damage control system for your brain. In a glancing fall, this flexible skin absorbs the shear force applied to your head and lessens the impact to the precious contents. Head trauma is the leading cause of motorcycle accident fatalities, and most of these are because the head is turned rapidly on impact and the brain, floating loosely inside, follows, tearing blood vessels and nerve fibers.

The new design, named SuperSkin, employs a synthetic skin that floats on a gel cushion outside of the hard liner. This skin is able to stretch up to eight times and the company claims that this technology reduces rotational impact by 50 percent, and possible brain damage by 67 percent.

6. The Oriental hornet may hold the key to more efficient solar cells in the future. Researchers at Tel Aviv University have investigated the striped cuticle of the insect and its ability to channel sunlight and convert it to electrical energy. The outside brown layer of the cuticle absorbs the sunlight and channels it to the yellow layer below, which is studded with many rod-like structures. Here, the photons are bounced around and are converted to electrical energy by the yellow pigment, xanthopterin. Experimenters have substituted this pigment for the silicon typically found in dye-sensitized  photovoltaic cells and proven that the material does work as theorized.

7. Bacteria are notoriously resistant to eradication, and bacterial biofilms, or slime, are a continual problem in environments that need to be clean. Researchers at Joanna Aizenberg’s lab at the Wyss Institute for Biologically Inspired Engineering at Harvard University have found one reason why. They are very hard to get wet. Liquids bead up on the surface of slime much like another familiar bio-inspirational organism, the lotus.

Unlike that of the lotus effect, however, this discovery is at the material level and holds broad promise in the manufacture of a natural matrix made only of simple basic and natural components-proteins and polysaccharides. The slime is a resilient mesh assembled into a multi-scale hierarchical structure and its synthetic twin would find myriad uses in health care, manufacturing and science.

8. The ant is an industrious creature and has inspired Bryan Lee, a young designer in Australia, to propose a unique and innovative disaster relief vehicle, named the Aid Necessities Transporter (A.N.T.). This multi-functional concept vehicle is able to traverse rough terrain with a unique independent six-wheeled system, and morph into either a land speeder or a container-carrying truck which delivers a temporary shelter along with its goods. This relief system depends on the vehicle’s quick return to base in order to deliver the necessary supply bulk, much as ants go back and forth from their nests. 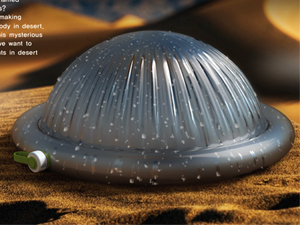 9. The Namibian Desert beetle is able to harvest fog from the night air in order to survive one of the driest climates on the planet. It does it by facing into the prevailing sea breeze and letting its cooler body condense small droplets of water which run down channels to its waiting mouth. The droplet formation is ensured by a clever series of hydrophilic bumps surrounded by hydrophobic parts of its shell. Designer Pak Kitae has fashioned a canteen called the Dew Bank Bottle that uses this same principle. Instead of a heat radiating cuticle, the bottle is made of quick-chilling stainless steel shaped in a dome with grooves that collect the water into a channel at the dome’s base.

10. Fish get around underwater without bumping into each other by using a sophisticated sensor system known as the lateral line. This is a matrix of hair cell sensors called neuromasts that are arrayed all over the fish’s body either on the surface or in sub-epidermal canals. The lateral line also enables fish to locate prey, avoid predators, navigate shoals and communicate with other fish using the water itself as part of the sensing.

Douglas Jones, from the University of Illinois at Urbana-Champaign, along with Yingchen Yang from Northwestern University and others, has developed an artiﬁcial lateral line (ALL) consisting of a 3-D system of biomimetic neuromasts (BNs) wrapped around a cylinder. The engineers connected their MEMS array to a beamforming algorithm program in order to image real-world events in a three-dimensional water environment. Their prototype could accurately locate a source of disturbance in the water, and image the natural tail flicking of a crayfish under various conditions. This is a decided contribution toward making more sophisticated navigation, communication  and control systems for underwater vehicles and robots.

Congratulations to all our winners: May your species prosper! These innovations, as wide-ranging as they are, represent a very small portion of the research and development now focused on bio-inspired materials, structure, and processes. You can expect this trend to continue as discovery begets more discovery, and our world looks increasingly to nature for solutions.

How to make a better adhesive without the nasty chemicals