Clean water doesn't come cheap. Businesses often have to rely on expensive water filtration systems to ensure their clean water supplies. And to meet drinking water quality standards implemented since the late 1980s, researchers expect that treatment plants across the United States will have to invest hundreds of billions of dollars in infrastructure.

But what if businesses could save money by protecting upstream forests instead of building new, costly infrastructure?

One means to achieve this is called "payments for watershed services." Businesses and water utilities provide financial incentives to landowners to conserve, manage and restore their forests in order to protect water supplies. 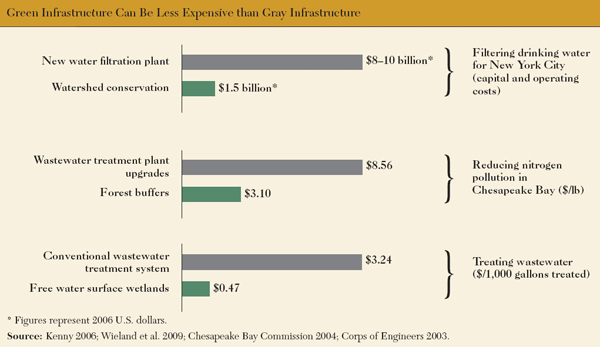 • By naturally filtering water, forests can reduce drinking water treatment costs. New York City saved billions of dollars in water filtration costs by conserving the forests and natural landscapes of the Catskills instead of paying for a new water filtration system.

• By curbing erosion, forests can keep sediment and excess nutrients out of waterways. Forest buffers near streams can prevent nitrogen from entering waterways at approximately a third of the cost of wastewater treatment plant upgrades.

According to a new issue brief from the World Resources Institute, public entities are not the only ones that can benefit from investments in green infrastructure. Businesses that depend on a consistent supply of clean water, such as beverage companies, power companies with hydroelectric facilities, microchip manufacturers, and housing developers may have a business case as well.

WRI's brief provides an overview of businesses and water utilities in the United States and other countries that are already beginning to pursue forest conservation as a cost-effective means of ensuring clean water supplies. Many of these approaches could be applicable in the southern United States too, which contains 29 percent of the country's forestland. However, awareness of these kinds of incentives is mixed, and markets and infrastructure to handle transactions are just starting to emerge.

Going forward, these kinds of payments for green infrastructure can be a powerful tool for conservation and business alike. With its combination of forests and freshwater challenges, the South is ripe for using this new approach.

To access this brief and other issue briefs in the Southern Forests for the Future Incentives Series, and to learn more about southern U.S. forests, visit: www.SeeSouthernForests.org.

A critical moment to harness green infrastructure for clean water