Diversey's sustainability program has delivered an impressive ROI by providing a new perspective on old issues.

Over the years there has been a steady, trickling stream of criticism regarding the business case for sustainability, whether it's Milton Friedman writing in the New York Times in 1970 or Professor Aneel Karnani's recent Wall Street Journal editorial. What often gets lost in these critiques is the perspective of corporations who view sustainability as an innovation lens where they can leverage their capabilities to foster growth and increase shareholder value.

There are an increasing number of companies who view their sustainability programs as a competitive advantage and many of those participate in the GreenBiz Executive Network. The Network is a member-based, peer-to-peer learning forum for corporate sustainability professionals, established to bring together like-minded executives to discuss strategies for implementing sustainability initiatives at their companies.

Making a Commitment to Sustainability

Diversey is a world leader in cleaning and hygiene solutions for business. With a number-one or number-two market position in more than 175 countries, it provides a wide range of cleaning products and dispensing technologies, equipment, tools, training, and consulting services to their business-to-business customers.

In 2008, the company committed to Climate Savers, the rigorous greenhouse gas reduction program managed by the World Wildlife Fund (WWF). More than 30 corporations have partnered with WWF to establish ambitious targets to voluntarily reduce their greenhouse gas emissions. According to the WWF web site, Climate Savers partners will reduce CO2 emissions by over 50 million tons by the end of 2010.

To be accepted into the program, Diversey had to make four commitments in addressing climate change:

To make a challenging, measurable reduction in its emissions within a specified time frame;

To be accountable through a third-party validation process;

To partner with their customers and suppliers to help them reduce greenhouse gas emissions; and,

To share learnings and encourage others in the industry to achieve similar emission reductions.

But the commitment to the Climate Savers goals is only one aspect of the overall sustainability approach of the company. Diversey focuses on measuring the returns on its sustainability investments with a focus on an Integrated Bottom Line. The integrated bottom line is a concept derived from triple-bottom-line accounting that suggests environmental, societal, and economic factors should be considered together in measuring the impact of business operations. Diversey was introduced to the concept through their work with Natural Capitalism Solutions, where the integrated bottom line is being used to combine social and environmental measures into a financial balance sheet and income statement instead of being treated separately. In that way, the environment and society are seen as critical elements of a financial bottom line. Figure 1 presents an illustration of how an integrated bottom line can be calculated. 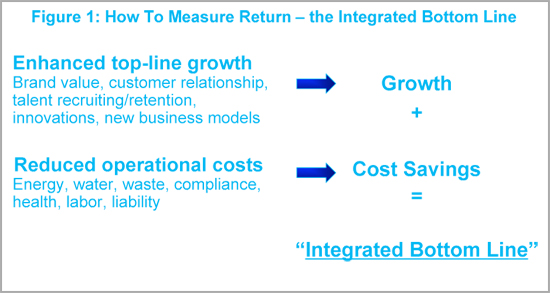 Not all sustainability-related efforts have an easily identifiable financial return. But programs such as Diversey's Global Children's Initiative (which seeks to improve the lives of one million children) and programs that encourage employee volunteerism have real value. As Daggett notes, "A corporate commitment to sustainability motivates employees, drives innovation, and creates a sense of purpose within the company."

In 2008, Diversey partnered with WWF to set its Climate Savers goals. Its initial goal was to reduce greenhouse gas emissions from its operations by 8 percent below 2003 levels by 2013.

Internally, the sustainability team at Diversey needed to find the right way to sell the organization on meeting its commitment. In addition to reducing GHG emissions, Diversey would also set out to achieve a positive ROI. Fortunately the numbers were on their side; Diversey designed a program that would deliver its initial Climate Savers commitment of an 8 percent reduction while also achieving $32 million in savings from investments that would total $19 million over the life of the program. Using that ROI analysis allowed the sustainability team some autonomy and flexibility for the overall program.

To make this program work and to deliver a financial payback, along with an absolute reduction in GHG emissions, the company needed to look at things differently. According to Chairman Curt Johnson, a shift in thinking came when the company identified greenhouse gas emissions as a measurable indicator of waste. Johnson made his point at a CEO Roundtable during the 2009 climate negotiations in Copenhagen: "Once industry begins to treat greenhouse gas emissions as waste, as an indicator of inefficiency in the system, enterprises can factor it into their profit models and calculate a return on investment that spurs the creative private-sector action that will make a huge difference in emissions."

The company took a three-step approach when looking for opportunities to meet its goals:

1. Avoidance. These projects are often overlooked in favor of efficiency but usually account for the biggest opportunities for savings. Avoidance initiatives, such as travel reduction, often require little or no capital investment. However, they do often require changes in behavior, which can be difficult. In the example of reducing travel, the company started slowly by curbing air travel booked with less than two weeks notice. Another avoidance program that provided a healthy return was daylight cleaning – having offices cleaned during the day to reduce the use of lighting and other resources previously needed for the crew when working at night.

2. Efficiency. These projects involve redesigning and optimizing business processes and energy systems to be as efficient as possible. Examples include building lighting retrofits and HVAC efficiency upgrades.

3. Generation. This involves meeting Diversey's energy needs with on-site low-carbon power generation. These are typically more capital-intensive projects such as installing wind turbines or a Combined Heat and Power fuel cell. Although these projects can be challenging due to high costs, Diversey was able to fund both wind turbines and a CHP fuel cell at their global headquarters in Wisconsin by reinvesting some of the savings from avoidance and efficiency projects.

While avoidance initiatives could be quickly funded, those alone wouldn't be enough to meet the company's Climate Savers commitment. Conversely, power generation projects often fall short of the company's expectations for ROI but provide a major impact in terms of GHG emissions reductions. In order to achieve a return on its investment and an absolute reduction in GHG emissions, Jeramy Lemieux, Manager of EHS at Diversey, devised an innovative portfolio management approach to balance all three areas of opportunity.

The more balanced approach to energy investments allowed Diversey to effectively manage projects in much the same way one would manage their personal retirement plan. Instead of evaluating each efficiency project solely as a discrete investment, opportunities are analyzed as part of a long term strategy that balances the speed of financial return (simple payback), the volume of financial return (NPV) and the cost of the carbon investment ($/MT carbon) across an entire portfolio of projects. This approach effectively reduces uncertainty and risk through diversification, overcomes the hurdles of purchased electricity variation, increases opportunity by looking beyond just the "low hanging fruit" and most importantly allows for a predictable and reliable rate of return.

In 2010 Diversey brought on an Environmental Defense Fund fellow, Adam Ostaszewski, to better translate these working methodologies into a series of simplified tools that could be used both internally and externally. By applying equal parts of financial rigor and a fresh, entrepreneurial perspective, Adam was able to craft tools that did just that. These tools simplify and standardize the approach and allow business users to focus more of their time on the development of quality projects rather than on the financial analysis of those projects in terms of all other investments.

Diversey originally pledged to reduce greenhouse gas emissions from its operations by 8 percent below 2003 levels by 2013, and provide a return of $32 million on an investment budgeted at $19 million over the course of its efforts. No single project could achieve those dual goals of financial return and absolute emissions reduction and so the company looked at its overall program in terms of an integrated portfolio.

Figure 2 graphically depicts the portfolio development process. With the WWF commitment to define an emissions reduction objective alongside a commitment to an overall positive financial return, Jeramy set about identifying the biggest opportunities. Much like establishing a mutual fund, he created a basket of potential projects by performing detailed energy audits, evaluating lighting retrofits and investigating opportunities for low-carbon power generation. 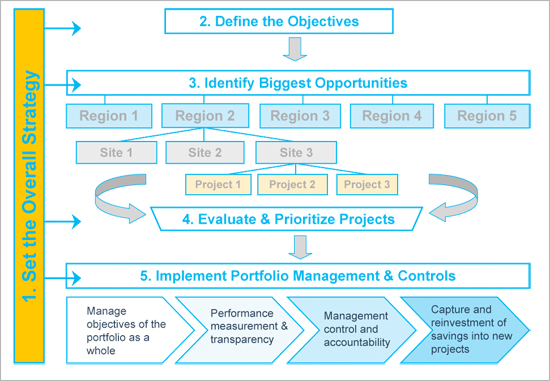 For each opportunity, the value of the carbon reduction projects varies greatly by geographic region and individual site. Identifying the company's biggest opportunities for cost and carbon reductions began with collecting data at each of the company's sites on energy consumption, cost, and the related emissions. The cost and "cleanliness" of the local energy is a major factor in determining the attractiveness of the opportunity. This drove the creation of a list of site-specific projects.

Jeramy created a set of tools to identify the most attractive opportunities. Figure 3 provides an example of the front end of the modeling process, where energy consumption and other data is input and the output is weighted based upon cost and carbon reduction (here treated equally at 50%) and performance goals (such as payback period or energy reduction targets). 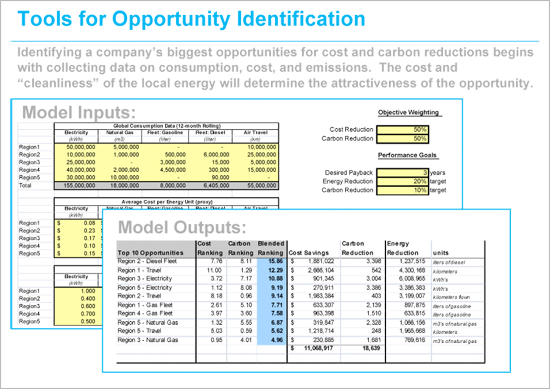 The results of the up-front modeling are then input into the project database to prioritize and select projects to be included in the portfolio. By using the tool (shown in Figure 4) in an iterative fashion, the team could select projects that yield better net present value (NPV) over the payback period or select projects for greater cost efficiency.

This spreadsheet-based modeling tool allowed the team to make wise investments that meet carbon and economic targets. Figure 4 illustrates a relative ranking of the pool of all potential projects. The cost ranking is derived from a calculation of net present value and the carbon ranking represents a single year of carbon savings in relation to total capital expenditure.

By combining the cost ranking and the carbon ranking, Jeramy could derive a single value for prioritizing projects. This allowed him to look at the effectiveness of each capital dollar spent.

Diversey's sustainability program has delivered an impressive ROI by providing a new perspective on old issues, such as energy efficiency. One year after establishing its initial goals, the company tripled its emissions reduction commitment to 25 percent, using the same 2003 baseline and timeframe ending in 2013. At the same time, it was able to reduce its investment from $19 million to $14 million while committing to this larger emissions reduction.

By leveraging a portfolio management strategy, the company has outlined a number of operational initiatives that will help it meet its goals, including improving the fuel efficiency of its worldwide auto and truck fleet by switching to vehicles with the best fuel efficiency in their class and alternative energy vehicles; upgrading the energy efficiency of its buildings, manufacturing plants and operations in major sites around the world; and installing on-site alternative energy sources such as fuel cells or wind turbines.

Perhaps the biggest lesson learned, Daggett told me, is that "Sustainability initiatives create value by inspiring new ways to conduct business, such as innovation and customer partnering."

J&J shows how to find the money for sustainability projects